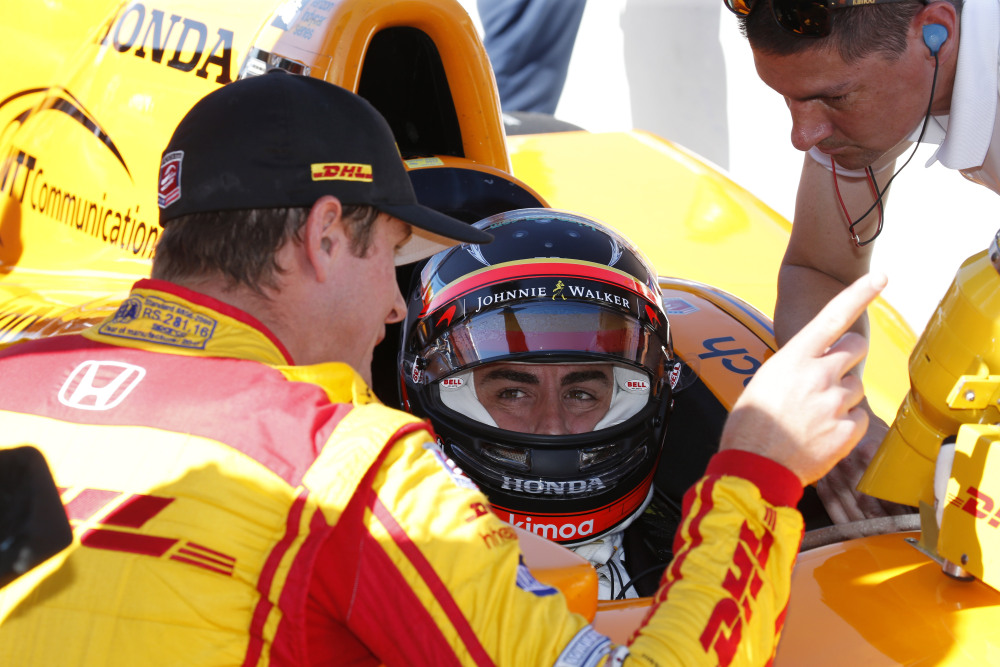 IndyCar ace Ryan Hunter-Reay says he would love to race against Fernando Alonso in IndyCar if he decides to come and race in the USA in 2019.

Today Alonso announced he would not race in F1 in 2019 because he has no chance of winning with the McLaren F1 car.

We asked Hunter-Reay today about this weekend's Pocono 500 and the possibility of Alonso racing full-time in IndyCar in 2019.

The defending champion at Pocono is Will Power, Penske team. This year at Indy, the Chevy teams appeared to have a little bit of a horsepower advantage on the top end. We asked RHR whether he felt this would be the case at Pocono this year and how he feels about the Honda team chances are this weekend?

"I think we have a great chance. I mean, Pocono race is different than Indy. It is its own beast," said Hunter-Reay.

[adinserter name="GOOGLE AD"]"I think we're going to see a different type of race. I don't think it's just going to come down to top end speed, although that will help at Pocono. I think it's going to be more of a handling race."

I then asked him whether he felt the front wing changes that IndyCar is making, although minor, for this weekend is going to help the racing.

"It's supposed to help. We'll have to see," said Hunter-Reay.

"Even with the few cars that tested at Pocono last week, we don't really have an understanding yet of what these cars are going to do in a group, because nobody ran together.

"The first session will really tell us a lot. It will the first time we get this aero package and with add-ons, that IndyCar has opened up. It will be the first time that gets into a pack in actual racing on track.

"We hope so. We think so. The data says it should help, shift the balance towards the forward. Hopefully we can make that happen and also make for a better race."

"There's some similarities to Indianapolis that we can take over to Pocono. It does have an offset that we have found in the past. The two tracks are not exactly similar. They definitely require different setups.

"But that's really what we'll do, I think. Zach Veach tested last week, he was the only Andretti car to test, but he got us some good data. Probably a good starting point there.

"Really the tricky part now is getting in traffic and seeing what we have. It's one thing to put a good qualifying car on track, do it all alone, but it's a completely different set of circumstances when you put yourself into a group of 10.

"We'll have to see where we are there. That's will be the difference maker, I think."

We asked him on his thoughts on Fernando Alonso, who won't be racing in Formula 1 next season? Would he like to see him in IndyCar next year?

"That would be great, absolutely," said Hunter-Reay.

"This series, I've been saying it for a while, this series is the most competitive series in the world, no doubt.

"You cannot name who is going to win each race. There are no favorites. There's a long list of winners even from this year. You have a really tight championship.

"It would be appealing to me, if I were him. I spent time with him as his teammate. He's as hungry as ever to win. I think IndyCar is a great spot. IndyCar stock continues to rise for that reason."

We asked RHR, who raced with Fernando Alonso last year as a teammate at Indy, if he were to come to IndyCar, would he welcome him into the Andretti team either as a teammate or as a co-teammate with McLaren? How did he work together in terms of car setup with the team? Was he a good asset?

"Yeah, absolutely. Worked very well together. Yeah, I'd welcome him, no doubt."

Whether he knows more than he is saying or not, RHR did not let on to having any inside scoop on what Alonso is going to do.

"I think he'd be a great addition to IndyCar and I think he'd have a lot of fun here," said Hunter-Reay.

He did talk about one of his existing teammates, Alexander Rossi, and if Alonso joins the team, the three of them would form sort of a Super-Team.

"Alex and I work very well together. We tend to like similar setups. We've definitely found in the past it's better to work together than go your separate ways.

No doubt, we're pushing forward. We want Andretti Autosport to win the championship, whether it's him or myself. Obviously I'd prefer the 28 car was the one that won it. We're pushing for that common goal, no doubt about it." Mark C. reporting for AutoRacing1.com