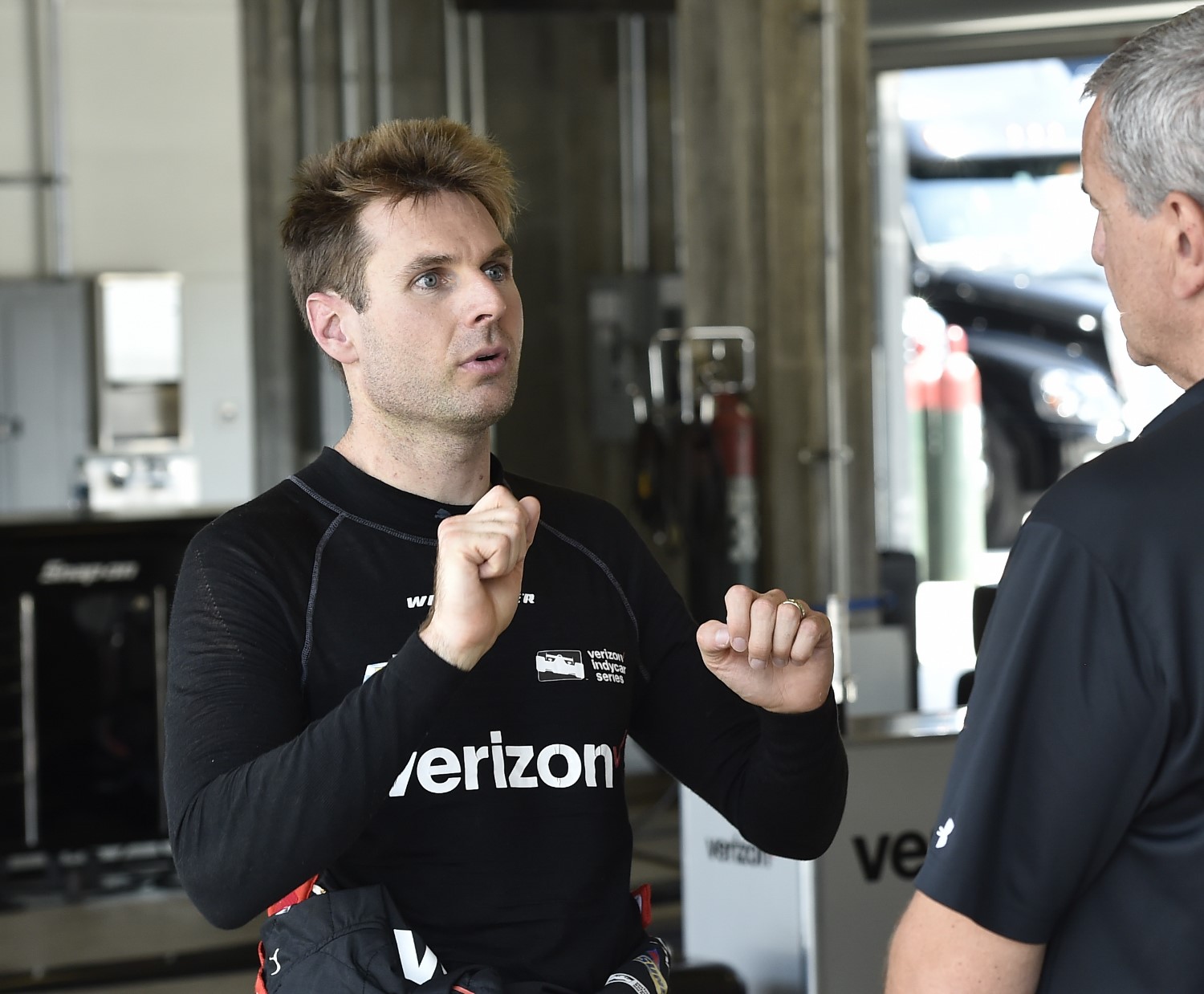 THE MODERATOR: Welcome, everyone, to today's IndyCar media teleconference. Over the next few weeks, we'll be highlighting the contending driver for the 2018 Verizon IndyCar Series championship.

We're pleased to be joined today by Will Power, the winner of the Indianapolis 500 for Team Penske. Will, thank you for taking the time to join us today.

WILL POWER: Thanks, Arni. Really appreciate you having me here in the conference room, but also allowing me to speak to the media (laughter).

THE MODERATOR: You had a rollercoaster of a 2018 season. Obviously the high point must be the month of May, when you not only won the Indy 500, but the Indy Grand Prix. What has 2018 been from your perspective?

WILL POWER: You're right. It's been very up and down. The highlight, absolutely, winning the 500. But as far as the championship goes, had great speed, great qualifying. Just had too many DNF's basically.

Still in the game. It can change very quick. I was 70 points out coming into the month of May. I left the month of May leading the championship. Very focused on having a good finish to the season.

WILL POWER: It's different every year. You gain experience over the years just completing the races. But it's just doing the right things that win races basically. You don't actually think of it as a championship, you just try to execute each day you're at the track. That's the focus.

THE MODERATOR: Kind of talking about this championship, you talked about taking it race by race. What will it take to make up the ground on Scott Dixon and the other three guys in front of you, teammate Josef Newgarden, Rossi and Hunter-Reay?

THE MODERATOR: The next race is the ABC Supply 500 at Pocono Raceway. You won back-to-back races at Pocono, three of the last four 500-mile races, the first guy to do the back-to-back at Pocono ever in IndyCar. As a guy who has been known as a road and street course guy for most of your career, what is it about Pocono that suits you so well?

WILL POWER: It's actually superspeedways. But Pocono has been a track I've always enjoyed, always done well at the races. Yeah, looking forward to running there again. Love superspeedways. Really, really feel right at one with them, so yeah.

THE MODERATOR: Let's open it up for questions for Will Power.

Q. (Line breaking up.)
WILL POWER: Just get a Verizon phone and you'll be right (laughter).

Q. We're on pace to have maybe the lowest number of cautions in the season in modern history. Over 10% of the races run under yellow, some with no yellows. Is it drivers? The aero kit? Both? Why has it been so good?
WILL POWER: I would say it's obviously a level of competition now. You have a lot more continuity of drivers in IndyCar these days, so obviously people understand the racing and the cars a lot better. There's no bad drivers in the field any more. They all know how to race hard but fair. You know, IndyCar developed a great car to drive. You got to hang it out, but it's forgiving.

Yeah, it's very interesting how green the races have been, but it's not surprising with the level of driver talent.

Q. You said it, and so did Bourdais, on a road course and street course you can run closer to people now, if they make a mistake you can pass them, but not necessarily have to knock them out of the way.
WILL POWER: Yeah, that's true. The way they developed this car is you can run very close. The air does not disturb you anywhere near the old car. So, yes, that's true. So you're not taking a desperate move. You're already pretty close.

Q. A lot of the NASCAR drivers have described Pocono as a superspeedway but with a lot of elements of a road course. I'm thinking because of the turns, the different lengths on the straightaways. Do you find that the same as an IndyCar driver? Is there a track similar to Pocono on the circuit?
WILL POWER: The most similar track is Indianapolis for the fact you take a total road course race line. Yeah, that's true of Pocono. It's a superspeedway. I think the thing that differentiates that track is it's three very different corners: one with a lot of banking, one that's very open, pretty much wide open every lap, then one that's kind of like Indianapolis with no banking and the car slides around.

It is a great race circuit. Really, really cool. A lot of fun.

Q. It's a track that you enjoy driving on?
WILL POWER: Yes, I do. Yes, I really enjoy racing there. It's one of my favorite tracks.

Q. Can you talk a little bit about how you think the new car is going to perform at Pocono in a couple of weeks.
WILL POWER: It's really hard to tell. But I feel like this car drafts better. It punches a bigger hole than the old car, so you get a big run. I think the racing will be similar. I think it will be an exciting race.

Without testing there, it's very difficult to understand how this aero kit will work exactly. I think the downforce number's pretty similar. I predict it will be like it was last year.

Q. Since winning the Indy 500, how has life maybe changed for you? Maybe some of the things you've gotten to do since being the Indy 500 champion?
WILL POWER: It hasn't changed all that much apart from you have more commitments and media. You finish the 500, the season just continues on. You got to keep pushing away to try to win a championship.

Honestly, it's just so satisfying every time I think of it. Sometimes you're just sitting there thinking, Man, I won the Indy 500. For me, it was such a big deal, such a great feeling of accomplishment.

Q. Arni mentioned you won three of the last four 500-mile races. Any key to that that you've been able to capitalize on? What is it about the 500-mile races you've been able to take advantage of here?
WILL POWER: I really enjoy racing I guess 500 miles. The superspeedways, just experience. Obviously Pocono is a track I really enjoy. Indianapolis is, as well. Just superspeedways in general. I won at Texas last year, Pocono. I won obviously Indy this year.

But, yeah, just experience, understanding what I want from the car. I enjoy the tracks. I think that's what makes me do well there.

Q. If the final race was tomorrow in Sonoma, where you're at in the points, you're certainly going to have double points at Sonoma, as well, do you change your strategy in that final race because so much is on the line plus the extra points? Does that kind of favor a guy that's further back in the pack because the extra points are available? What is your strategy going into Sonoma going to be if you're in the same position in the points standings?
WILL POWER: Yes, it absolutely changes your strategy. Double points helps you if you're far back like I am. You obviously would be very aggressive with your strategy depending on how you qualifying. You'd be going there to try to win the race. Maybe you take a big risk strategy-wise to do that. Even on the track as far as you race, you'd be quite aggressive.

Yeah, double points situation is great for my position.

Q. Last year after Takuma won, it played out throughout the rest of the season and into the off-season in Japan heavily in the media. Have you heard anything back from Australia? How has your win in the 500 been received? Are people still talking about it? Looking forward to you coming back there in the off-season with the trophy to visit? What's it like back in Australia?
WILL POWER: Yeah, it got a lot of coverage obviously when it happened. I haven't been down there, so I don't really know how much it's followed now. I think we're kind of maybe planning on taking the Borg-Warner there, just depends on the situation. We'll think about that in the off-season.

Q. Speaking of Indianapolis, you were able to go back there yesterday for a Firestone tire test. What was the feeling like going back there for the first time after winning there?
WILL POWER: Yeah, it was pretty nice feeling driving through the tunnel and just going back to that place with such great memories and actually get back out there on the track. Yeah, yeah, always brings a smile to my face any time I think about it or obviously drive into the place at Indianapolis.

Q. What kind of things were you able to accomplish for Firestone yesterday?
WILL POWER: We found some pretty good tires actually. I think they brought probably a lot of different compounds, constructions. IndyCar actually also did a test on aero stuff. They have a lot of data to manipulate it in the way they want, how they want to race. Yeah, I think they'll take a look. We definitely found some good stuff.

THE MODERATOR: Seeing as we have no further questions for Will, we'll wrap up today's IndyCar media teleconference. Thank you.