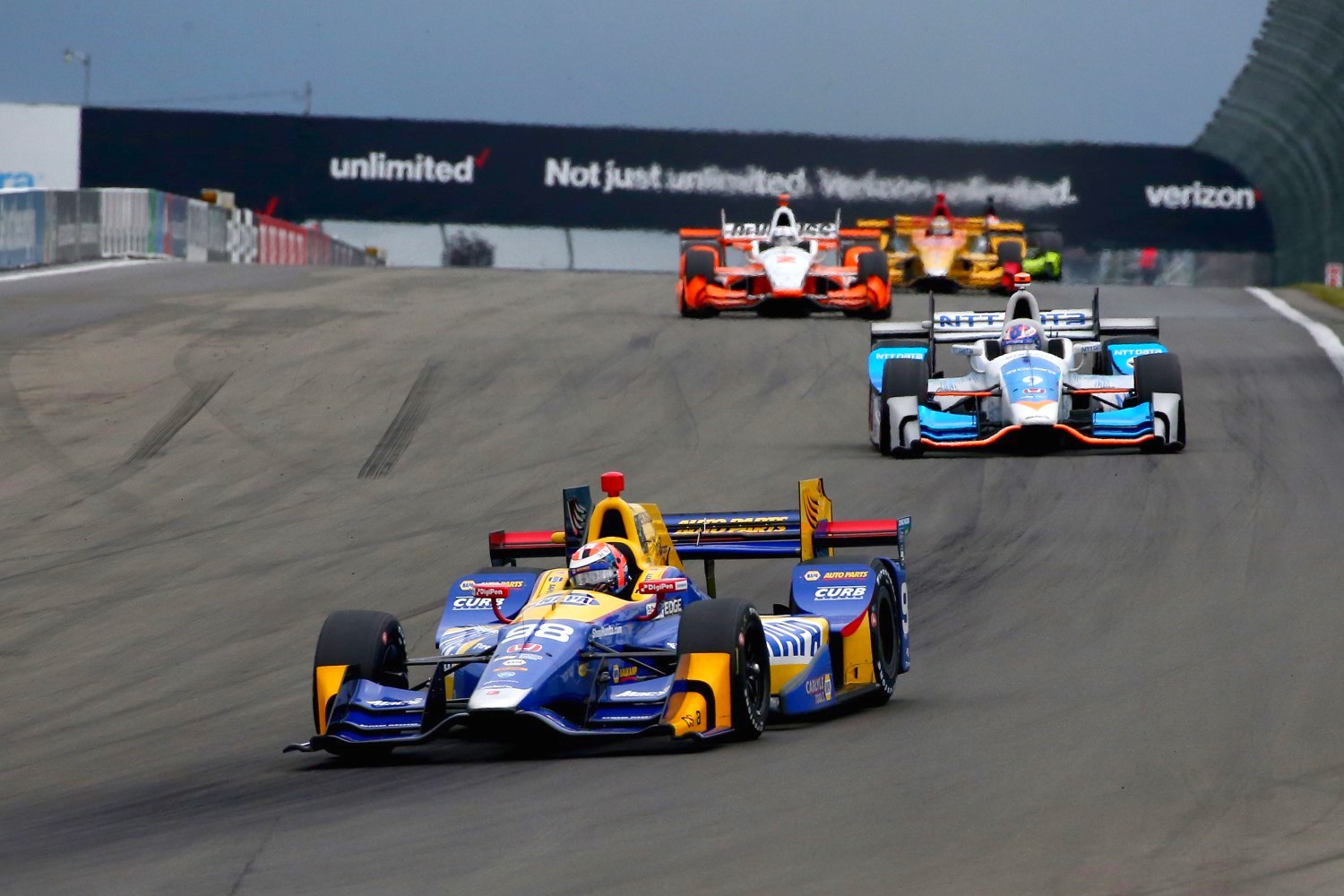 Video Streaming: 4 p.m. ET Saturday on www.IndyCar.com. Streaming also available on INDYCAR's Facebook and You Tube platforms as well as iRacing's Twitch. NBC Sports' Leigh Diffey is the lead announcer for the streaming alongside analysts Townsend Bell and Paul Tracy. The pre-race activities will be highlighted by iconic national anthem singer Jim Cornelison adding his voice as he did for the last three 2019 Indianapolis 500s. Katie Hargitt will interview the race winner on INDYCAR's Instagram Live following the race. Diffey also will host a post-race virtual press conference with the podium finishers for media members (call-in details will be distributed).

SEBASTIEN BOURDAIS: (No. 4 Tresiba Chevrolet): "I never did iRacing or more real simulation games because we had the kids and life is busy enough without me saying, 'Hey I'm just going to play games.' Since our job right now is going to be restricted to only virtual stuff, that's the route we've got to take. We just have to try and do the best we can with it. Ultimately it is just another challenge. Hopefully we give some real entertainment to the fans, keep engaged with them and put on some good shows. Then it is a win-win situation."

SANTINO FERRUCCI (No. 18 Team SealMaster – Dale Coyne with Vasser-Sullivan Honda): "I am excited to be back in the No. 18 Team SealMaster Honda Dale Coyne Racing with Vasser-Sullivan car as we be begin to compete in the e-world. I think it's great that the fans and our sponsors will be able to get back involved with something that is INDYCAR racing, even though its virtual. Both INDYCAR and iRacing have done a fantastic job partnering to create this opportunity. It is unique and I'm very much looking forward to kicking off the iRacing INDYCAR Challenge this Saturday with Watkins Glen."

TONY KANAAN (No. 14 ABC Supply Chevrolet): "The world of SIM racing is new to me, and when I say new, I mean it. When INDYCAR announced that they were planning on creating something to keep the drivers and fans connected through this difficult time, I went after getting a SIM setup for the house. That was last week! Since then, I've spent some time getting used to it and learning the basics to be able to participate but I've got to admit that the younger drivers that are used to iRacing or other types of SIM racing have a huge advantage over a guy like me that just started four days ago. Nonetheless, I believe that it's a neat idea and as a driver I support the initiative of INDYCAR to go iRacing and keep creating content and interacting with the fans. I'm looking forward to seeing how this first race goes!"

DALTON KELLETT (No. 41 K-Line Insulators Chevrolet): "I am looking forward to the INDYCAR iRacing Challenge. Although not how we planned to start the season, it is a chance for us all to go racing and entertain the fans. That's what it's all about. This is also a unique opportunity, as we are debuting the K-Line Insulators livery on the #41 eCar."

SCOTT McLAUGHLIN (No. 2 Shell V-Power Chevrolet): "I can't wait to be part of the INDYCAR iRacing Challenge. I will have a little more of an advantage here because I've spent some time in an Indy car on iRacing – much more than I've spent in a real Indy car. What' I'm really excited about is to race against other drivers in the series. While I wish my first INDYCAR race was in person, I'm really looking forward to racing against my Team Penske teammates and all of the other guys in the field. I love iRacing, and I'm looking forward to getting a lot of laps in between the INDYCAR Challenge and the Supercars All-Star eSeries."

FELIPE NASR (No. 59 Gallagher Carlin Chevrolet) – "I'm excited about the INDYCAR Challenge iRacing event at Watkins Glen this weekend. I'm looking forward to representing Carlin driving the No. 59 Gallagher Carlin Chevrolet. I think it's a great idea for the racing community in general, the fans, teams, drivers, and everyone. I'm sure iRacing will be able to put on a good show, especially with how serious all of the drivers are taking it while having fun at the same time. Times like these we really all need to be united and if we can't physically be on track, it's nice to be able to give the people at home something to cheer for and support. I'll be giving my best to bring the Chevrolet home in the top spot."

JOSEF NEWGARDEN (No. 1 Hitachi Chevrolet): "It's going to be a really neat event. We're all pretty excited to get back to racing, even if it's only in the virtual world. I personally race Forza quite a bit on my own and am excited to do more with iRacing and get back to racing against my INDYCAR SERIES competitors. All of us drivers are itching to get back in the race car and this is the next best thing – to at least have a little competition amongst each other. I'm also going to have a live stream on my YouTube channel so I'm really excited to check out not only the broadcast for the race but also giving them a look at what I see while I'm playing. We're all excited to hopefully put on a really good show for the fans."

ALEX PALOU (No. 55 Dale Coyne Racing with Team Goh Honda ): "I'm really looking forward to this first virtual race. I'm getting everything ready for it like upgrading to a faster internet. It's not the same when you're driving on your own versus if you are competing. I think it's great to have the fans vote for which race track we'll be racing on for the INDYCAR iRacing Challenge this weekend. We're doing the best we can to give back to the fans under the current circumstances and it's good for the drivers and the sponsors, too. Hopefully, we can put on a great show. I know some of our current drivers have a lot of experience on iRacing, so they may have an advantage. I still have some time to practice and get up to speed as much as possible but mainly this is to have fun and keep the fans entertained. We'll try to make it as real as possible with normal passes as if we were on a real race track and not do anything crazy. It should be exciting."

WILL POWER (No. 12 Verizon Chevrolet): "Man, I really do love iRacing. I've been doing it for years now and it's such a great tool to help me train and stay sharp when away from the race car. I'm really looking forward to being able to go back to racing against my INDYCAR SERIES competitors and see how everyone else races. A lot of drivers have also done iRacing for years and some are still learning. It's going to be pretty awesome to see how everyone performs. I really appreciate INDYCAR giving us all the opportunity to race again and I can't wait to be part of it."

GRAHAM RAHAL (No. 15 United Rentals Honda): ""I'm excited to try iRacing. The last time I even drove on a sim like this was probably 12 years ago which was a very early phase and very early days of iRacing-type things so I'm excited to see how much it has changed. Obviously with my experience level being really nonexistent compared to some of these guys like Santino (Ferrucci) , Colton (Herta) and Sage (Karam), who seem to be spending a ton of time on it these things, I might be in for an uphill battle but either way we'll have some fun with it. "My goal is to go out there and complete some laps for the United Rentals Turns for Troops program and have some fun. Like on real race weekends, United Rentals has pledged to donate $50 per lap that I complete to the Turns for Troops initiative with Soldier Strong. Literally I don't know what to expect. I only just built my sim Thursday night. On a call we had Wednesday, they were saying 'Set up this button for this and that button for that and I had never even seen the steering wheel at that point. I spent some time Thursday night with Adam (Kolesar), Hayden (Sharretts) and TJ (Thompson), on our team who have iRaced, and my sister-in-law Brittany's boyfriend who is a big iRacer and has a static sim in his house so he's going to help me at least get my screen mounted in the right position. "The fans want to see some type of racing or competition and that was showcased through what NASCAR accomplished last week. It's also important visibility wise. To be able to provide some visibility for United Rentals and all of our partners is key. The third element is 'What can we learn?' There may be something we can learn out of this o down the road. My sim has no motion or anything like that. There are big variances in these sim setups. Some sims have full motion and some are static as mine is. It will be interesting to see if there is something we can learn going forward."

FELIX ROSENQVIST (No. 10 NTT DATA Honda): "It's going to be interesting to see how everyone gets on. I've been logging on more and more the last day or so to practice. I did a few laps yesterday. It's good fun! I think whenever we do anything with our INDYCAR drivers, it's always competitive. It doesn't matter what kind of contest it is; you know everyone is going to be pretty serious about it. Hopefully it'll be a good race for the fans to watch – I think that's the main goal. It is also a good opportunity for our sponsors to get some coverage in pretty quiet times. It's a good thing for the fans; it's a good thing for the drivers. At the end of the day, it's just a game but I think any competition of any kind right now is very welcomed."