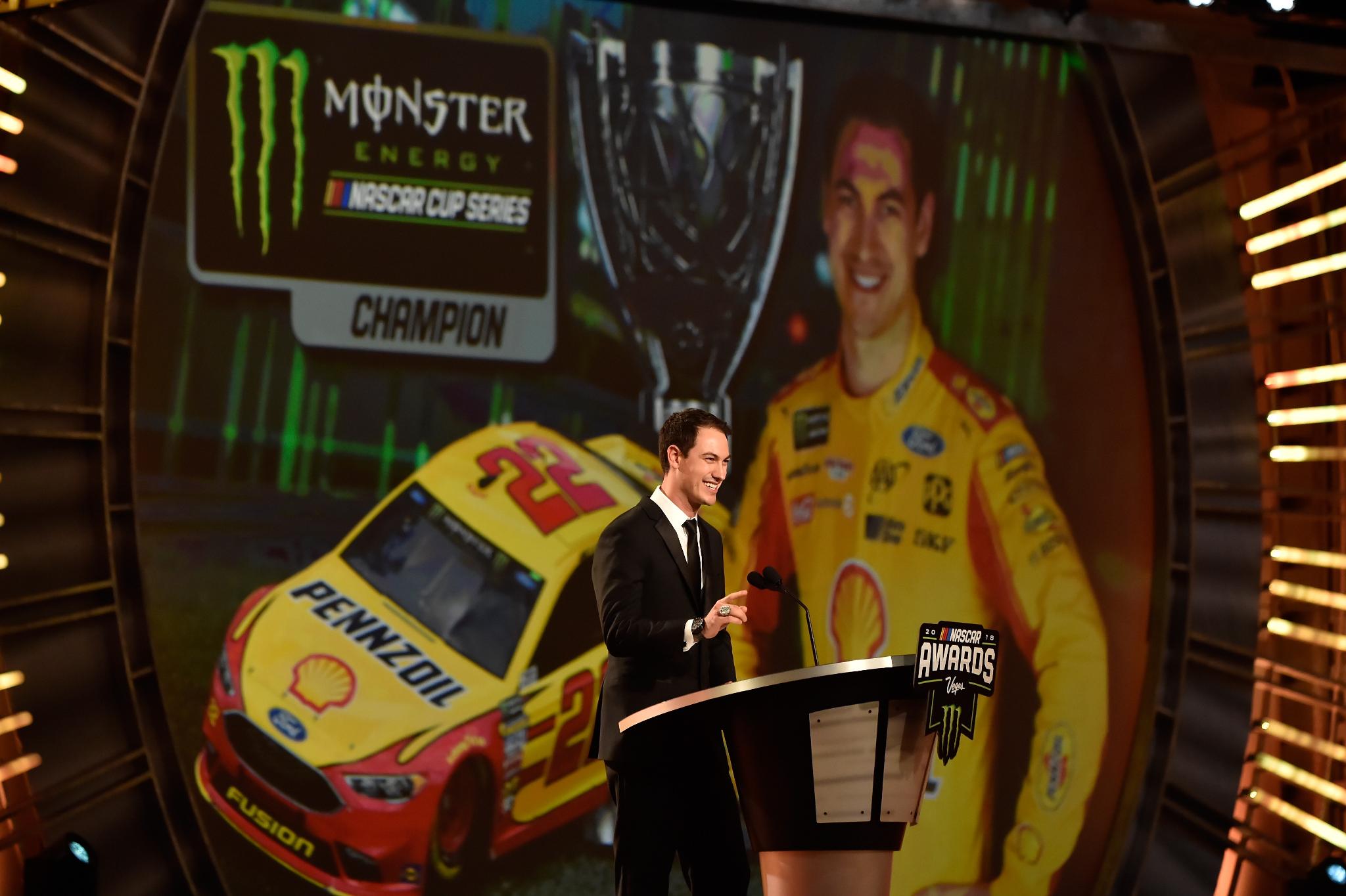 Though Joey Logano said the reality of his first Monster Energy NASCAR Cup Series championship sank in as soon as he took the checkered flag on Nov. 18 at Homestead-Miami Speedway, his words at Thursday night's awards ceremony at Wynn Las Vegas seemed to belie that assertion.

"To the NASCAR fans," Logano said, "love me or hate me, I just love your passion."

The night before the season finale in Miami, Logano spent the evening providing dinners to the less fortunate, emblematic of the charitable work of the Joey Logano Foundation. The Cup championship will provide him an even larger platform for his philanthropic activities.

"I know I've made a lot of mistakes on and off the race track," said Logano, who got his ride in the No. 22 Team Penske Ford in 2013 after being released from Joe Gibbs Racing. "But God's given me an amazing opportunity to learn from each one and teaching me what it's like to have a second chance in life.

"I talk about how our sport gives us such a large stage to make a difference. Here I am standing on the largest stage in NASCAR, so I need to use this moment to challenge all of us and inspire all of us to be the change… Let's just remember that life is so much more than what we see here tonight."

Team owner Roger Penske reflected on a year that brought him not only Logano's championship but also his 17th Indianapolis 500 victory with Will Power, his first Brickyard 400 win with Brad Keselowski and an Australian V8 Supercars title with Scott McLaughlin.

"To see this whole championship unfold over 38 weekends and to culminate here in Las Vegas—sitting up on the stage there with Joey, all the sponsors and Ford Motor Company and my wife Kathy, that she hangs out with me for over 45 years is amazing," Penske said.

"It's just hard to believe. We're going to be back after it next year. Each year, we set the bar a little bit higher, and I think that's what makes us so good."

To no one's surprise, Chase Elliott received the NMPA Most Popular Driver Award for the Monster Energy NASCAR Cup Series. Dale Earnhardt Jr., winner of the previous 15 Most Popular Driver awards, made the presentation. Elliott follows in the footsteps of his father, NASCAR Hall of Famer Bill Elliott, who earned the distinction a record 16 times.

"I figured it was maybe going to be a tossup between me, Joey and maybe Kyle (Busch)," Elliott joked. "It's definitely a big passing (of the torch). It's so cool to know it stayed between Elliott and Earnhardt for so long."

Then Elliott turned his attention to Earnhardt, who moved from the driver's seat to the NBC Sports TV booth this season.

"I am glad, though, that you quit a year before you tied Dad's record," Elliott said. "I'm pretty happy about that."

NBC Sports' Kelli Stavast and Rutledge Wood hosted the event, along with co-host Marty Snider. All 16 drivers who made the 2018 Playoffs were recognized and interviewed during the program. Two of the drivers, Jimmie Johnson and Denny Hamlin, failed to win at least one race for the first time in their careers.

Johnson will race in 2019 without crew chief Chad Knaus, ending a partnership that started in 2002.

"I just look back at 17 amazing years," said Johnson, who is paired with crew chief Kevin Meendering for next season, "and really excited about what's ahead of us."

"It can only go up," Hamlin said of his prospects. "Everything's going to be different. Everybody's going to be starting from scratch."

Logano, however, will be starting the 2019 season as the reigning champion, a role he is certain to enjoy, no matter what's in the rule book.