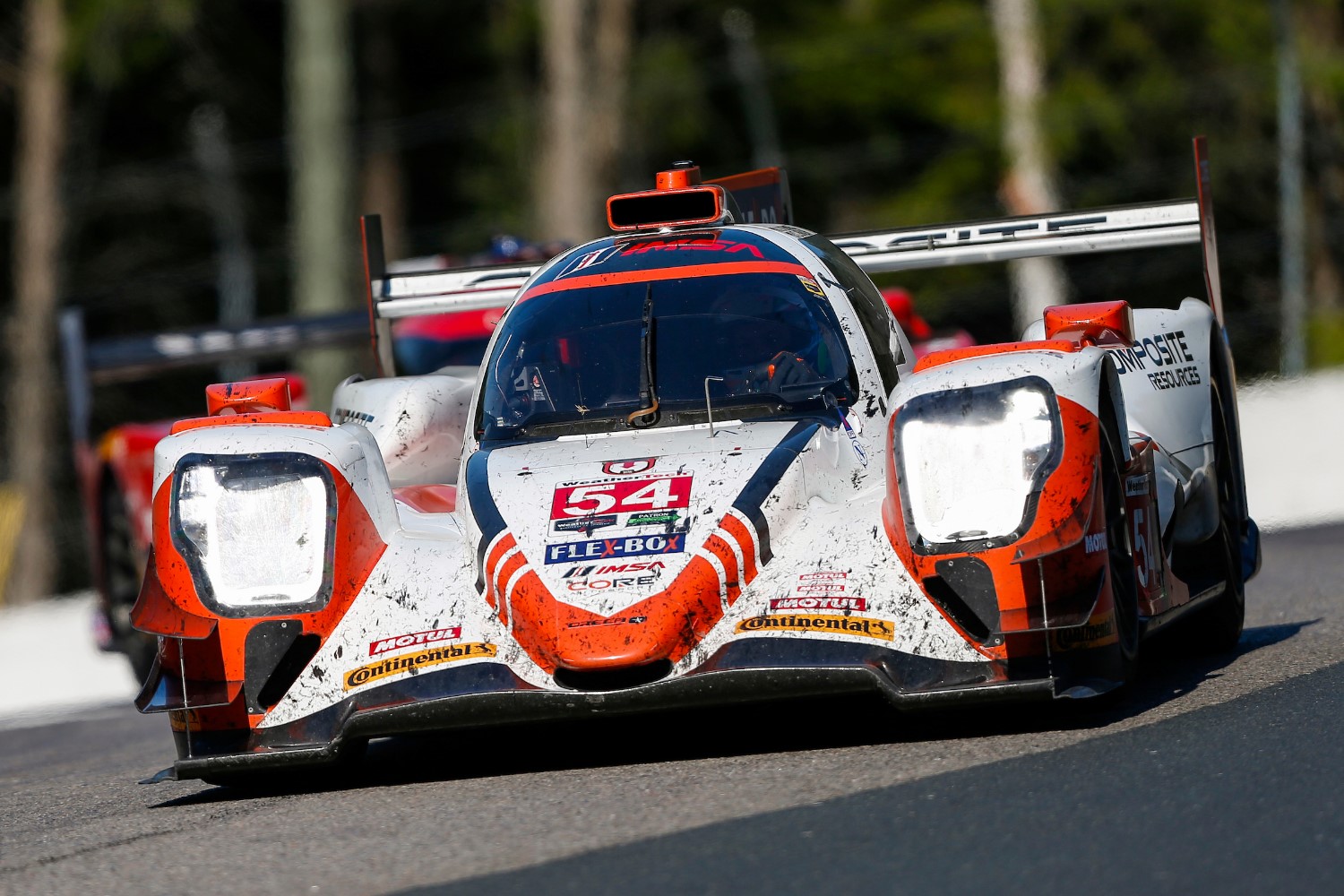 Canadian Tire Motorsport Park has been a strong venue for co-drivers Jon Bennett and Colin Braun dating back to their days racing in the American Le Mans Series Prototype Challenge (PC) class.

Coming into the weekend, they’d won three PC races at the ultra-quick, 2.54-mile circuit, the most recent coming in the IMSA WeatherTech SportsCar Championship PC class in 2016. In Sunday’s two-hour and 40-minute Mobil 1 SportsCar Grand Prix, the longtime teammates took it to another level.

Driving the No. 54 CORE autosport ORECA LMP2 entry, Braun took the lead from Jordan Taylor in the No. 10 Konica Minolta Cadillac DPi-V.R with eight laps remaining in what would be a 116-lap race. It capped a last-to-first run for the No. 54, as for the second consecutive week, the team elected to have Bennett start the race after Braun had captured the Motul Pole Award in qualifying.

The penalty for changing starting drivers is to start from the rear of the class field, but Bennett turned in a solid opening stint before handing the controls to Braun. He went on to win by 3.431 seconds over Taylor to take the first WeatherTech Championship Prototype class victory for himself, Bennett and the whole team.

[adinserter name="GOOGLE AD"]“Since we unloaded, it’s been a Cinderella weekend for us," Bennett said. “It’s nice to see our program and the Porsche program at the top of the charts in all the session and pole positions. Our team was working well all weekend. Colin was amazing all weekend, walk-on-water amazing.

“I don’t have to tell you what kind of momentum that gave us. Qualifying is qualifying, and racing is racing, so it carried over to the race. My job and our strategy has always been: return a square, damage-free car to Colin and go and that’s what we did. A lot of great strategy from his dad (engineer) Jeff Braun, and holy cow, here we are."

It was their second straight podium result in a week after taking the runner-up spot in the Sahlen’s Six Hours of The Glen last Sunday and was the third podium run of the season for the No. 54 team, which finished third in the season-opening Rolex 24 At Daytona.

“It’s so cool to get the first win for CORE at this level," Braun said. “It’s been a pleasure driving with Jon all these years. We’ve had a lot of firsts together and done a lot of cool things and this is another one of those things in a long line.

“Hats off to the CORE guys. We had great strategy all day. We saved fuel when we needed to, we saved tires when we needed to and we just played our cards the right way and got it done when it mattered. It was important in this race to not get too excited at the beginning. We just sort of laid in the weeds all day and slowly worked our way up and we were there when it mattered at the end."

Taylor and co-driver Renger van der Zande combined to lead a race-high 71 laps en route to second place in the No. 10 Cadillac DPi-V.R. It also was their third podium result of the season and first since a third-place outing in April’s BUBBA burger Sports Car Grand Prix at Long Beach.

Finishing third were Eric Curran and Felipe Nasr in the No. 31 Whelen Engineering Cadillac DPi-V.R. It was the fourth consecutive Canadian Tire Motorsport Park podium for Curran, who also finished second in 2015 and won the race in each of the past two years with then-co-driver Dane Cameron.

It was Curran and Nasr’s fourth podium result in seven races and enabled them to take over the WeatherTech Championship Prototype class points lead by one marker, 198-197, over their Action Express teammate, Filipe Albuquerque, in the No. 5 Mustang Sampling Cadillac DPi.

Next up for the WeatherTech Championship is the Northeast Grand Prix at Lime Rock Park in Lakeville, Connecticut on July 20-21. The two-hour, 40-minute race will feature the GT Le Mans (GTLM) and GT Daytona (GTD) classes and will be televised on Saturday, July 21 at 4 pm ET on FS1.

The entire weekend came down to one moment for Ford Chip Ganassi Racing at Canadian Tire Motorsport Park.

After struggling through the practice sessions, the one bright spot heading into the race was the lap No. 67 driver Ryan Briscoe put down in qualifying. Briscoe put the Ford GT he shares with Richard Westbrook on the front row at p2 with a 1:13.831. There was hope. Then, through much of the 2-hour, 40-minute race, there didn’t seem to be anymore. Until the very end.

Westbrook, who’d made it up to the front of the GTLM pack by waiting while other teams pitted, got the call on the radio to duck into pitlane for a quick stop while a caution flag flew. Thanks to the crew, he kept the lead.

“I’m just a little in shock, actually," Briscoe said. “I didn’t see that coming, especially after the first stint. The car was a real handful. We made adjustments with the tire pressures and ran the absolute perfect strategy, got Rick in and he just drove masterfully. We caught the yellow at the end, saw that happening and dove in the pits and came out with the lead."

With the win, their second of the season after driving to victory lane at the Rolex 24 at Daytona, Westbrook and Briscoe regained the IMSA WeatherTech SportsCar Championship points lead they’d lost to teammates Joey Hand and Dirk MÃ¼ller just last Sunday.

“I’m just so happy," Briscoe said. “It was such a disappointment at Watkins Glen where we definitely had the fastest car all weekend, then had a mechanical issue one hour into the race. That was a tough one to swallow, and to come back here where we weren’t expecting to get the win and get the win, it’s just incredible. I’m so happy and so proud of my teammate and the whole team at Ford CGR."

Corvette Racing’s pair of Chevrolet Corvettes both finished on the class podium Sunday at the Mobil 1 SportsCar Grand Prix at Canadian Tire Motorsport Park. It marked the team’s first double podium of the season and allowed both Corvette C7.Rs to gain positions in the GT Le Mans (GTLM) points standings of the IMSA WeatherTech SportsCar Championship.

Chevrolet also moved up a spot in the Manufacturer standings to second after six rounds.

The race featured six caution periods that allowed for a variety of pit stop strategies. In the end, the No. 3 Corvette finished a spot higher than where it started, and the No. 4 C7.R improved two positions.