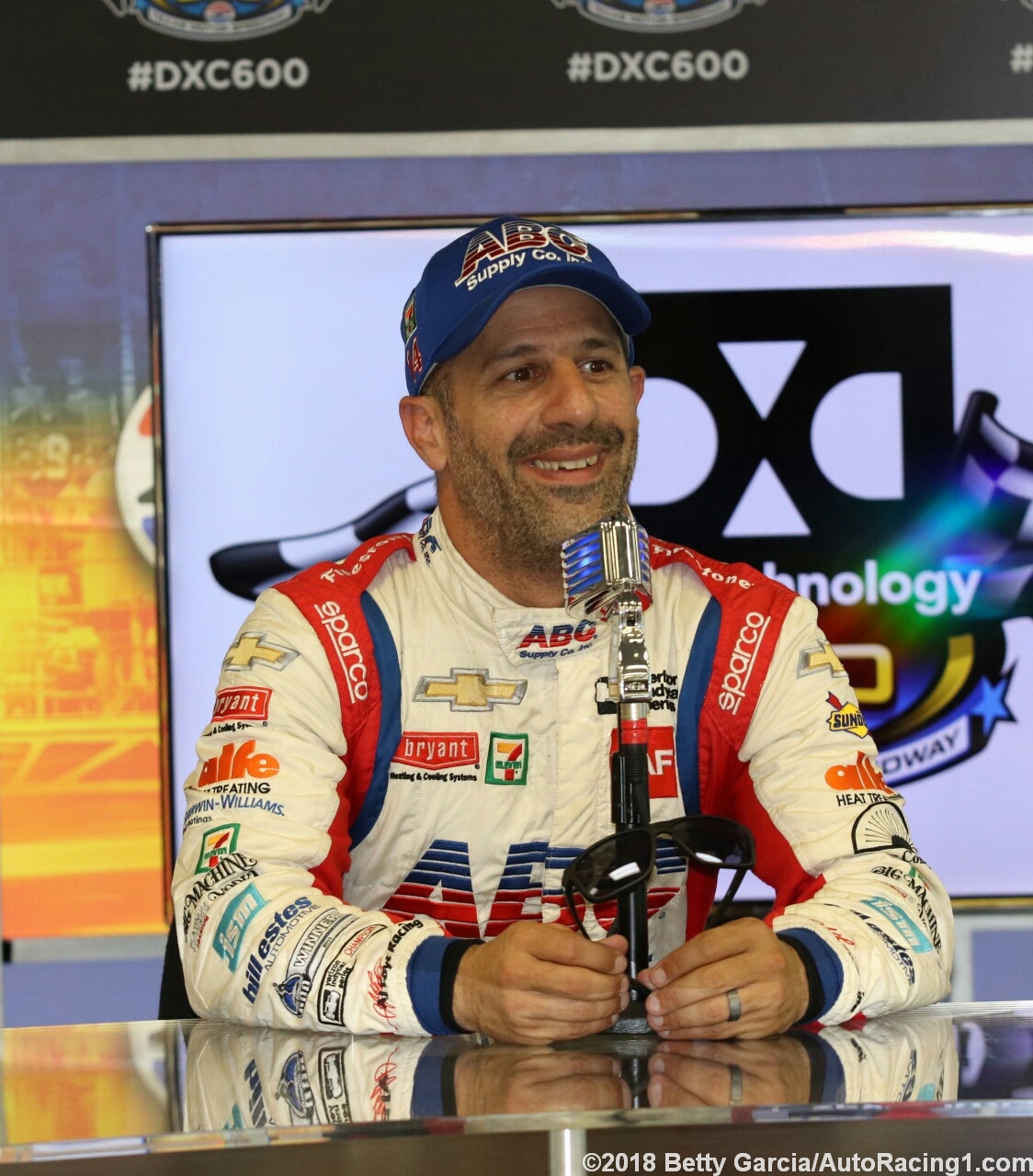 THE MODERATOR: We are joined by Tony Kanaan, who qualified sixth earlier this afternoon.

Tony, you got a taste of what race conditions might look like tomorrow, at least in the early part of the race. How are you feeling about your car right now?

TONY KANAAN: Will be tough. I think I don't like what I see, but I don't make the rules. I'll just drive whatever they give it to me. I'm not happy. That's it.

THE MODERATOR: You said you felt like your car didn't have the speed for pole today, but you felt like you were fairly happy with where you qualified. What are you thinking for your chances in the race?

TONY KANAAN: I haven't seen anybody passing anybody, so I don't know. Maybe I finish sixth tomorrow. Starting sixth, we finish sixth. Can't pass anybody.

THE MODERATOR: Questions for Tony.

Q. (No microphone.)
TONY KANAAN: Yeah, I mean, I have my own opinions. I don't want to debate on it because I'm going to create too much. Yes, we go from a pack race to a no-passing race. I think it's going to be boring for the fans. I don't think that's what we want to show people here. Apparently that's just my opinion. People that make the rules understand a lot more than the drivers, I guess.

Q. Do you not thinking the tire deg will help promote passing towards the end of stints?
TONY KANAAN: Yeah, I think so. But you guys are going to see us running around at 190 miles an hour. I don't think that's what we're here for.

Yeah, for sure, tire deg. I know a lot of people are debating on this or that. Yeah, it's okay for us to drive the cars because that's what we want. I just think it's too extreme right now.

Q. Do you see pit stop strategy being governed by tire life rather than fuel?
TONY KANAAN: I think first of all we going to have to check if the tires are going to survive what we're putting them through, to be honest. It's not about the wear, it's about blistering. That's become dangerous. It's not about who's going to be able to drive. Once it's blister, it's gone. It's not the tire's fault. It's a product of a combination of a lot of things that they need to happen together to put a tire to that extreme.

Yes, tire deg, you always going to see a tire deg. That's the way we did it in Indy. We did such a good job there. I also think we got put in a position that it's not fair. We haven't practiced in the conditions we going to have in the race, and they ask us to predict something. If you extremely uncomfortable at 120, 130 degrees track temp, you going to race tomorrow night, it's going to be 40 degrees cooler. It's kind of hard to predict. It's hard to give anybody a feedback what's good or bad.

You know, I can have my own opinions, I can be frustrated about it because I've been around and I think it is what it is.

Q. Did you relay these concerns to IndyCar officials?
TONY KANAAN: I have not had the time yet. I just came out of the car and came here. I don't think my opinion matters. They know what they are doing, I guess. They will do whatever they want. I'll just race. Doesn't matter.

I can complain. We complain all the time anyway.

THE MODERATOR: Tony, thank you very much.

THE MODERATOR: We'll welcome in Scott Dixon, who was fastest in this evening's practice.

Scott, you said earlier today it doesn't matter where you qualify here because anything kind of goes in the race. After tonight's practice, which was in conditions a little more similar to what we'll see tomorrow night, do you still feel the same way?

SCOTT DIXON: Yeah, you know, I think you get disappointed maybe if you miss in qualifying just for the sheer fact you're trying to qualify near the front.

We missed the balance. I don't know why the car in the first practice was very good, it was very good in most of the conditions. We thought we had a pretty good car by itself, as well. Yeah, just went into turn one and had a ton of understeer, which was quite strange.

Worked on the car tonight. Car felt pretty good. As the track temp comes down, it definitely helps a lot. But, yeah, just trying to hang onto the tires as long as possible. I think it's going to be the key for tomorrow night. The track grip started to come up significantly from what we had earlier, which I imagine halfway through the race it's going to be a ton of grip.

THE MODERATOR: Questions for Scott.

Q. T.K. just said he doesn't think there's going to be any passing. He says the tires are blistering bad. Do you think that's down to setup or are you having the same concerns?
SCOTT DIXON: No, I don't know. I passed a few cars out there. I think he did, too. I think the conditions will get a lot better. The second groove I think in three and four is going to come in pretty quickly. One and two, we might have to wait a little longer than what we saw in the past.

It's so tough to predict. You know, there was a bit of a group text going on earlier today between a lot of the drivers. Last year nobody predicted it was going to be a pack race. I was watching the race last night, by the end of the first stint, it was pretty much a pack race.

I think it's kind of a similar situation to what we found last year. Yeah, okay, the track has degraded a little bit, probably lost a little bit of grip. But Firestone in turn brought a little softer tire, which I think will help.

For me personally I'd rather it be on the driver side of it and safety side of it as opposed to having a big pack race and a lot of yahoos that are trying silly things.

Q. I asked T.K. the same thing. Do you think it's going to be one of those races that pit stop strategy is governed by tire life rather than fuel?
SCOTT DIXON: Yeah, I think that's kind of been traditional for Texas. But I think we also, because of that scenario, you see an accident beforehand, too, that causes a crash. I think you might have to be a little bit careful with the pit speed being extended now. You definitely don't want to be caught out on that. You could go down definitely two laps, you might go down three. That adds a little bit more of a dynamic to it. Probably a situation that you're going to have to give yourself some room on.

But, yeah, it's not really been a race for the good past few years that you really wanted to save fuel. You run max fuel the whole time just because you don't want to be saving any.

Q. Drivers today after their qualifying run said they were going to ask for more downforce. Would that not be a bad precedent to set in the middle of an event simply because you wouldn't have a chance to practice with the additional downforce?
SCOTT DIXON: Yeah, you know, I think the biggest discussion I've had was that we need to try and practice when we race. That's the biggest key. Obviously tonight wouldn't work. In the future, we could come in on Thursday, take the cars, run Thursday night, take Friday off, whatever we need to do, but run at a time when the car is actually going to be running the race.

We'll see. By the last half of the race, it could be very much like last year.

Q. Last year turn two was kind of a notorious trouble spot. Do you feel that's moved off turn four through the dogleg?
SCOTT DIXON: The dogleg's always hard just because there's such a dropoff there. I don't know about the other series, but especially with IndyCar, it's two or three inches that it drops off. I got collected by Sato last year, put a wheel off there, just hooked him sideways.

In your peripheral you're trying to look at the car beside you that's on your outside, it's very easy to cut the corner. Obviously then you lose control of the car. I think it's such a long, radius corner now. It seems to open up a little bit earlier in the previous configuration, the tire can get pretty beaten up there, so then you incur some understeer which takes off quite a bit quicker.

Last year, the second lane came in and actually was somewhat preferable, at least at the end of the race when we were racing for the win. I think we were hopefully going to get the win because we were on the outside and the momentum is just better.

Q. Until this year T.K. was your teammate. You seem to be a little more optimistic about tomorrow night's race. He seemed very pessimistic. Is that kind of unusual with the T.K. you've had as a teammate?
SCOTT DIXON: No, I think T.K. is always pretty upbeat. It could be just how his car is. I don't know. I hate to predict how the race is going to be because I've been wrong many times and it can shift that quickly. I talked to T.K. earlier. I just said, Last year nobody thought it was going to be a pack race, and lo and behold first stint it was a pack race. We'll see.

The track temp is just so critical here.

THE MODERATOR: Scott, thank you very much.