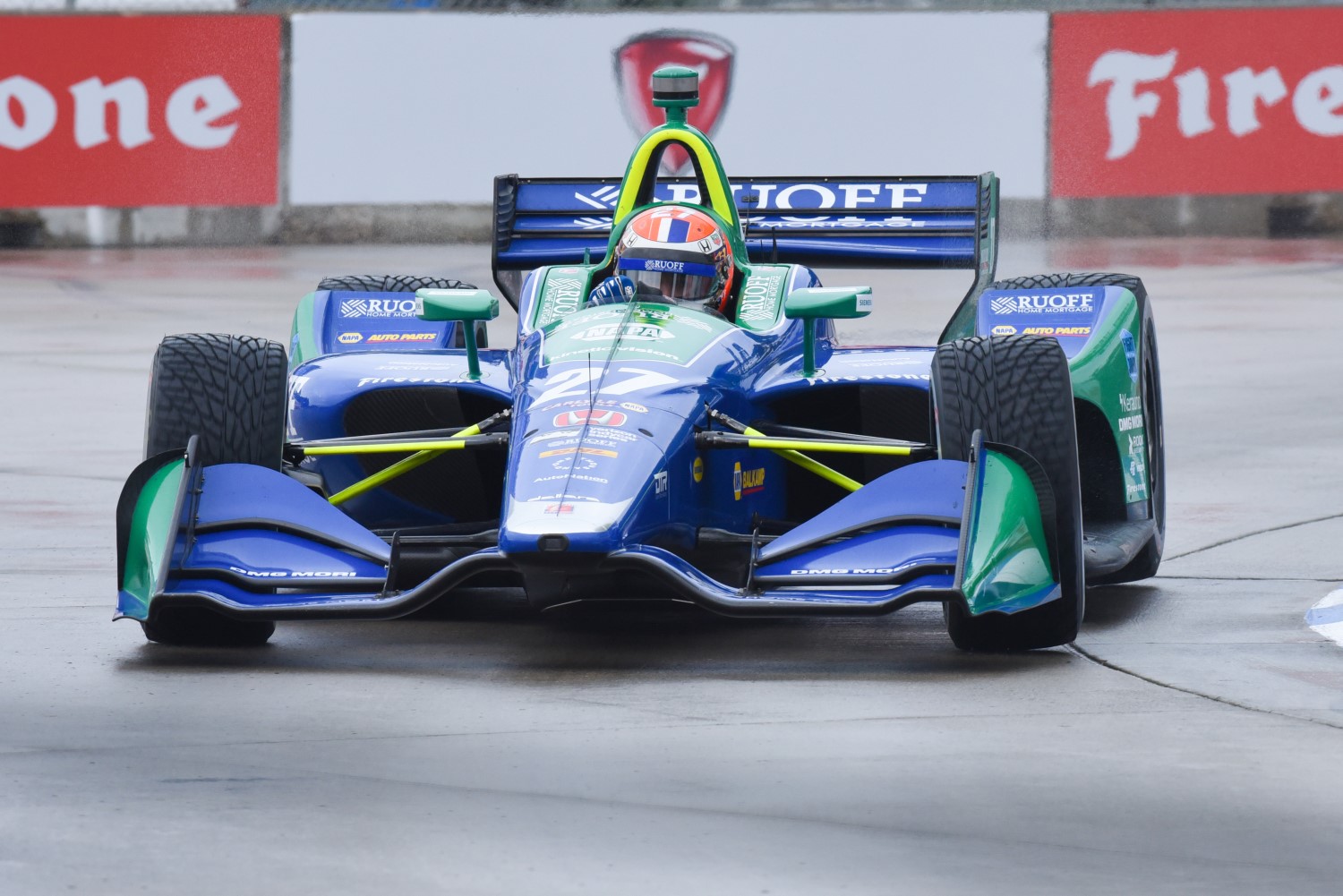 IndyCar points leader Alexander Rossi (Andretti Honda) turned the fastest lap in a wet qualifying session to win pole for the 2nd half of the Detroit GP doubleheader weekend this afternoon by 1/2 second over Penske Chevy driver Will Power who will start third.

Robert Wickens was fastest in Group 2 and will start on the outside of the front row and Ed Jones will start 4th while Scott Dixon rounds out the top-5.

A morning downpour made Firestone’s new rain tires mandatory for both 12-minute qualifying groups, as Robert Wickens paced the first session with an impressive lap of 1m33.6605 in his Lucas Oil Honda. Concrete does not dry as fast as asphalt and the track was just as wet for the 2nd sessions in his Ruoff/NAPA Honda before Josef Newgarden ran out of talent and drove his car into the tires and brought out the red flag with just under four minutes remaining and that ended the session.

Running on the new Firestone rain tire in wet but drying conditions this morning on the 14-turn, 2.35-mile temporary street course at Belle Isle Park, Rossi turned a best lap of 1 minute, 33.3143 seconds (90.661 mph) in the No. 27 Ruoff Home Mortgage Honda. It earned the current Verizon IndyCar Series points leader the third pole position of his three-year career and second this season.

Marco Andretti, Rossi's teammate, took the pole position in Saturday's qualifying for Race 1, which was won by Scott Dixon.

[adinserter name="GOOGLE AD"]The past two times Rossi has started a race from the pole – at Watkins Glen International last season and Long Beach this year – he has gone on to win the race. This time, he had to earn the top starting spot in treacherous conditions.

"It was difficult," Rossi said. "The wet's hard in any type of condition, especially on a street course like this. I've got to give a shout out to Firestone. This new tread pattern they came up with was really stout. It had a lot of grip, it was very predictable, I knew where the limit was right away.

"It made the job easier, for sure. It then becomes a session of trying to find the grip and maximizing as much as you can. Fortunately, the No. 27 Ruoff Home Mortgage car had a good balance and allowed me to do that."

Rossi was the fastest driver in the second qualifying group when the track began drying following a heavy rainstorm early in the morning. Schmidt Peterson Motorsports rookie Robert Wickens was quick in the first group and will start on the outside of Row 1 following a lap of 1:33.6605 (90.326 mph) in the No. 6 Lucas Oil SPM Honda.

"Having clear visibility in that quali helped me quite a bit," added Wickens, who won the pole in his first Verizon IndyCar Series race at St. Petersburg in March and qualified second in last month's INDYCAR Grand Prix on the Indianapolis Motor Speedway road course. "I'm very happy to start P2. It's my third front-row start of the season. Hard to complain."

Several drivers encountered difficulty on the slick concrete circuit during qualifying. Tony Kanaan, who made his 350th Indy car start in Race 1 on Saturday, damaged the front wing of his No. 14 ABC Supply AJ Foyt Racing Chevrolet when he hit the wall on his out lap and caused a red-flag stoppage. Per INDYCAR rule, Kanaan was not allowed to continue in the session and will start 22nd in the 23-car field this afternoon.

Ryan Hunter-Reay, who finished second to Dixon in Race 1, went into the Turn 3 runoff at one point in qualifying and then spun in Turn 8. The latter incident brought out a local yellow flag, forcing Hunter-Reay to surrender his best lap to that point. He will start 10th in the No. 28 DHL Honda.

Josef Newgarden, the 2017 Verizon IndyCar Series champion, slid into the Turn 11 tire barrier late in the second qualifying group to bring out a red flag to end the session. Penalized his two fast laps, Newgarden will start 19th in the No. 1 Hitachi Team Penske Chevrolet.

Dixon, who collected career win No. 42 on Saturday to tie Michael Andretti for third on the all-time list, qualified fifth in the No. 9 PNC Bank Chip Ganassi Racing Honda (1:33.9544). With the bonus point earned for qualifying first, Rossi leads Dixon by five points heading into the race. 2018 Indianapolis 500 winner Will Power, eight points behind Rossi and third in the standings, qualified third in the No. 12 Verizon Team Penske Chevrolet (1:33.8295).

Graham Rahal, who won both Detroit races a year ago but crashed out and finished in 23rd place on Saturday, was forced to his backup car today and qualified ninth in the No. 15 United Rentals Honda for Rahal Letterman Lanigan Racing.

Tire Choices at Start of Race