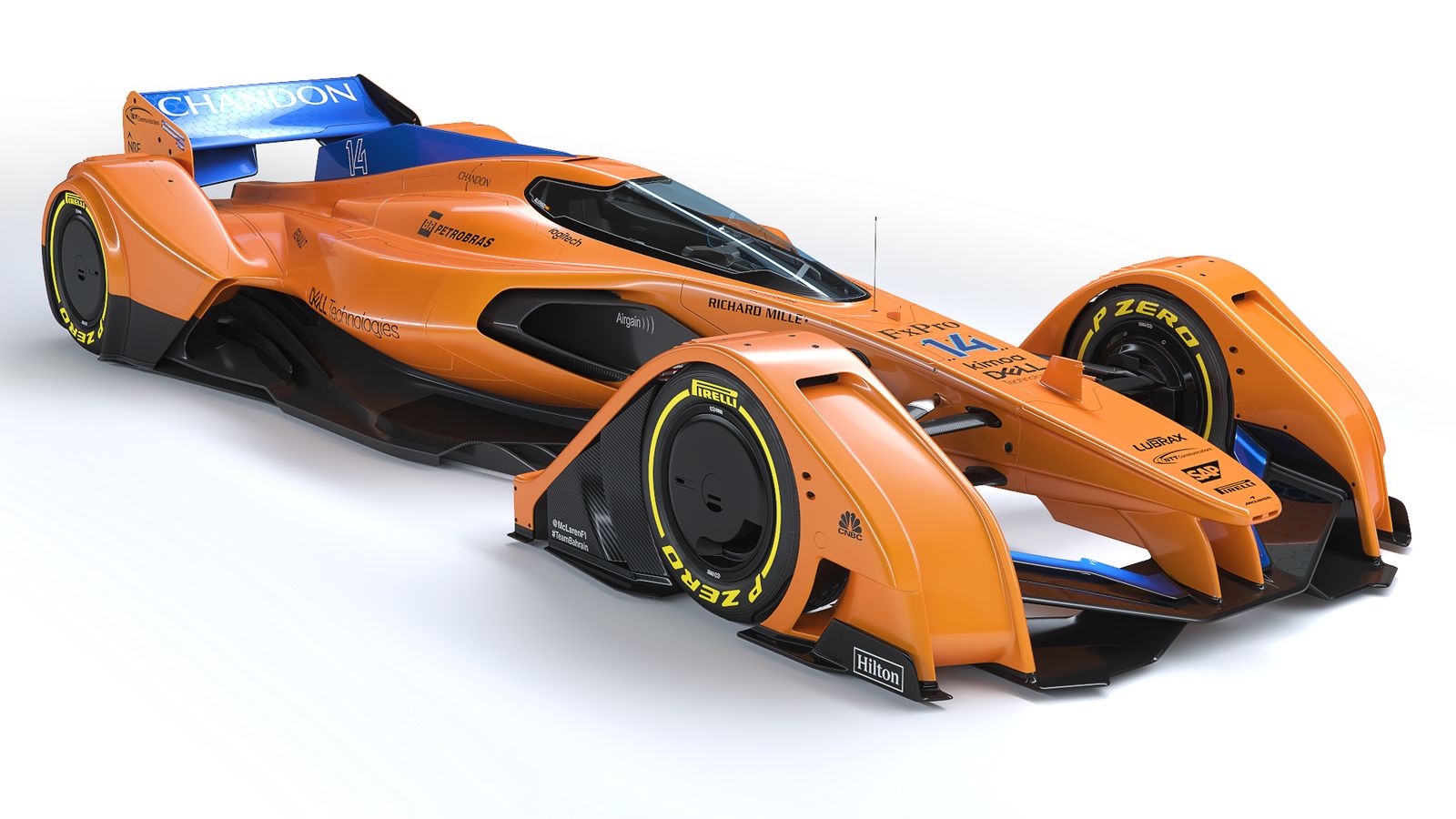 When McLaren unveiled its futuristic MP4-X prototype vehicle back in 2015, it wasn’t merely creating a visionary concept car, it was joining the important discussion around future technologies within motorsport, and the need for additional cockpit protection in the wake of a number of serious accidents.

Three years later, Formula 1’s introduction of the halo cockpit protection system has made that conceptual discussion a reality – albeit a somewhat controversial one.

And as the debate continues over the aesthetic validity of the halo (it may not be pretty, but its job is to save lives), we felt it was appropriate to dust off our original designs and give our future-vision canopy car a 2018 McLaren Formula 1 livery makeover.

Stunning in papaya, we present the McLaren X2.

Take a peek at our X2 gallery, and check out some of the neat ideas that helped the original MP4-X break the internet all those years ago…

[adinserter name="GOOGLE AD"]1. Advanced powertrain
High-performance racing cars have always spearheaded the development of future road technologies. The X2 could receive additional recharging by using inductive coupling built into the track. This could lead to more sustainable racing, but also be the catalyst for a shift-change in vehicle powertrain architecture that would benefit everyday car drivers.

2. Energy storage built into structural materials
Rather than storing energy in concentrated areas, the X2 would use ‘thin batteries’ fully integrated into the crash structure, storing energy from the hybrid and solar systems. Electricity would be stored and distributed within the vehicle’s structure and bodywork, where it would always be close to where it is both generated and used.

3. Super-cool high-impact protective canopy
A canopy not only needs to be structurally incorporated into the chassis – and allow the cockpit to remain easily accessible in the event of a roll or accident – but needs to enhance or improve visibility. It could be more adaptive; to let the audience watching at the circuit or at home see inside in certain conditions, or to improve the driver’s visibility in low light or intense sunlight.

4. Solar-cell energy capture and boost
Seamlessly mounted beside the lustrous AkzoNobel-painted bodywork, the X2 uses surface-mounted solar cells as a regenerative energy source. This could supplement existing onboard systems, or deployed as a boost option. Whenever cars are running in daylight there is a readily available source of usable energy – so why not capture it to work in harmony with existing fuel-efficient technologies? If this technology were developed it could have huge benefits not only for drivers but the environment too.

5. Active aero
Electrodes fitted to the surface of the car’s wings would electronically control the bodywork, enabling downforce to be dialed in for cornering, then dialed out along the straights. By running a car with inherently stalled aero, powerfully charged electrodes could be switched on into corners to turn the air around the wings into plasma. Additionally, the X2 would be fitted with advanced, adaptive shape-memory alloys that allow an electrical current to pass through them so they change shape under specific loads or particular conditions.

6. Brain-controlled control system
The X2 could be controlled via the monitoring of electrical signals within the driver’s brain. The vehicle would be equipped with visual gesture control systems or holographic instrument panels. And the driver would be constantly measured and monitored – to assist with hydration levels and optimal focus and concentration, also providing a unique method of measuring and understanding performance and energy levels during periods of differing stress intensity.

7. Real-time performance monitoring
An analytical system would monitor the driver’s movements, checking fatigue levels and automatically adjusting settings in the car to account for that.

A separate system would also monitor tire wear, enabling engineers to live-monitor tire data and interrogate images and telemetry in real-time to predict dangerous de-lamination before it occurs.

The X2 would also be fitted with a system to monitor the car’s structural condition; in the event of a failure or an impact, it would be able to provide information and data to enable engineers to more quickly understand what had happened.

8. Ground-effect floor
Tear up the technical rulebook and you have a huge underbody area to exploit. The X2’s ground-effect floor would be expansive – huge venturi tunnels beneath the floor to create a massively powerful aerodynamic effect – and, most importantly for the fan, improve the prospect for overtaking.

9. Advanced energy absorption technology
Impact-prone and safety-critical areas of the car would make use of material advancements such as negative-stiffness material structures. These have the ability to attenuate energy transferred in an impact. However, instead of being permanently deformed, they would have the resilience to recover their original shape and properties. This makes them effective in multiple impact events where they are still able to provide protection to the driver.