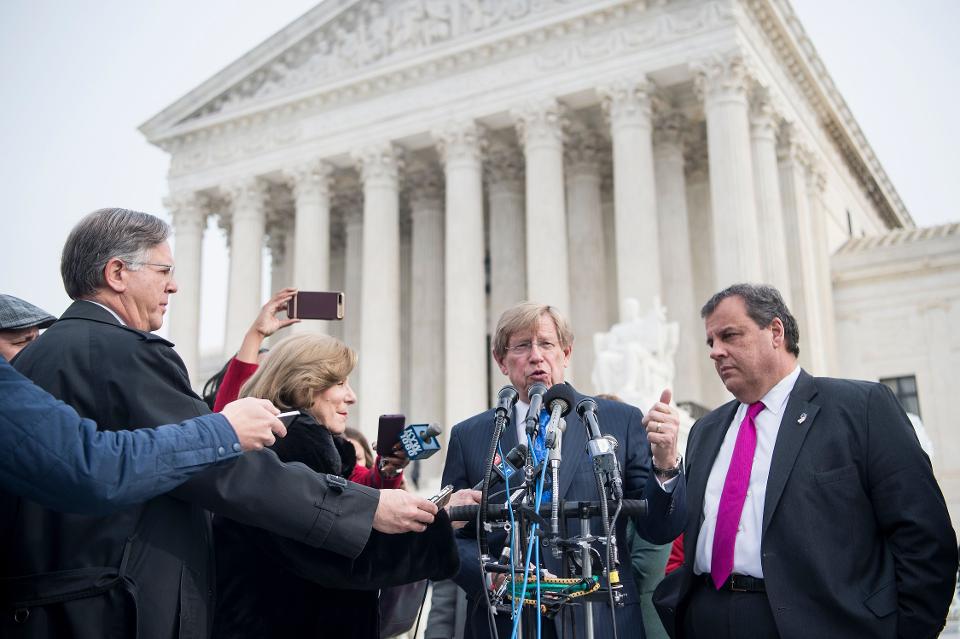 This typically the space reserved for a look back at the most recent IndyCar race. And we’ll get to this past weekend’s INDYCAR Grand Prix of Indianapolis in due time.

However, news broke Monday that promises to have a great impact on the American sporting landscape. After a multi-year legal back and forth the state of New Jersey won a ruling in the United States Supreme Court yesterday that struck down a 1992 law which effectively made sports betting illegal in most states.

Now, before getting started I know this is a motorsports website. However, to properly provide the framework for what this ruling may mean for motorsports, I think it’s necessary to first establish what the ruling may mean for sports generally. After that, we will then dive more specifically into the world of racing.

How did we get here?

Oh, where to begin. I imagine you are at least somewhat familiar with the 1919 Black Sox scandal, when 8 Chicago White Sox players were found to have participated in a plot to ‘throw’ that year’s World Series. That regrettable episode had a profound effect on the American public and probably played a significant factor in the stigma that surrounds sports betting in America.

Of course, the world has changed a lot since then. Players’ salaries have grown exponentially. Plus, the advent of the Internet in the last quarter century has provided bettors with avenues to circumvent lawmakers. This combined with fantasy football, NCAA office pools, and the emergence of daily fantasy in the last decade have gone a long way to eroding the strong stigma America once had with sports betting.

Furthermore, in this era of debt-ridden legislatures hungry to finance their operations, lawmakers have wanted in on the action. And similar to marijuana they’ve come to the realization to profit from it is to make it legal.

And that would be the cliff notes version of how we arrived at Monday’s ruling. Sports betting will likely be allowed in most states within the next few years.

[adinserter name="GOOGLE AD"]New Jersey has been prepping for this decision for years, as have other states to a lesser extent. You will likely be able to start placing sports bets at New Jersey casinos as early as next week. But the question remains is to what extent states will allow gambling. Will they simply allow wagering in their casino’s sports books a la Las Vegas? Or is the day coming soon when we will all have apps on our phones allowing us to wager on football games, baseball games or automobile races in-game or in-race?

I would argue the latter is inevitability. However, this remains an open-ended question, and will be handled state-to-state. And in that sense, we are very much in unchartered waters.

Everyone will scramble to profit

The NFL is already talking about charging state legislatures an integrity fee, which is off-the-charts-funny on the unintentionally humorous funny scale. Integrity fees are simply a staking of the flag that the NFL plans to get part of the action. How exactly the pie gets divvied up is a total unknown. But everyone is going to ask for their cut.

What does it mean for professional sports?

The short answer is more money, potentially a lot more money. Let’s look at these NFL statistics from the American Gaming Association:

This doesn’t take a genius to figure out. Betting = more interest = increased viewership = greater advertisement value = more money. Also, note the statistic above which indicates that sports bettors are 25% of the audience but account for 47% of the total viewership. Real simple: having action means greater interest. And the guy who has action isn’t turning off a blowout game in the 4th quarter because he wants to see if the Patriots can cover that 15-point spread.

Yes, football is by far the most popular sport in America. But one has to also acknowledge that a very meaningful element of its popularity resides in the ability to wager on it.

Doesn’t legalization of sports betting bring into question the integrity of the games, matches, races, etc.?

Yes; but not as much as some suggest, and not for the reasons many think.

Obviously, a Black Sox type scandal is the biggest concern when it comes to sports betting. But keep in mind, to have a fix, there has to be a large enough pie to divvy up for numerous parties to assume a major risk. And with major pro sports leagues having players’ unions that have demanded high minimum salaries, players aren’t digging ditches in the offseason like they were in 1919. In short, there is always a chance for a fix, but players these days have a lot to lose.

Furthermore, everyone should keep in mind that there are avenues to bet currently in place. If fixers saw an opportunity they probably would have exploited it by now. This new law doesn’t make thing more accessible for the fixers, only the average guy.

My guess is that if scandal were to happen, it would most likely take place in leagues where the players are not as well-compensated.

For example, a recent investigation into possible tennis match-fixing revealed some alarming results. While I won’t go into all the details the report noted that only about 250 women and 350 men of 15,000 professional players were making enough to earn a living. And while the study notes there is some evidence of top players being involved, the 14,000-plus players trying to grind out a living seem to be the main targets.

And it makes sense. Think about a tennis tournament, which has multiple matches going on simultaneously. Joe Schmoe is playing on Court 13 and no one is really paying attention because they’re watching Federer or Nadal on the stadium court. Joe Schmoe is struggling to pay his electric bill, and he has a nice offer to maybe not give his all in that day’s match. No one blinks an eye when he plays lousy and leaves town.

To me, a bigger concern for sports leagues going forward is not that a fix will happen a la above. That’s always a concern. The greater concern will be the ability to track it. Let me explain.

You may remember the Arizona State basketball point shaving scandal of the mid-1990s. What tipped off investigators to that was a load of action coming in against Arizona State in a 1994 game against Oregon State. Because all the action was concentrated in the one spot it could be legally bet, Las Vegas books, investigators knew something was up. With sports betting about to be ubiquitous, gambling syndicates will be able to spread their action further, making life more difficult for investigators.

That to me, is a bigger concern than anything that has been suggested.

What about the integrity issue in racing?

Let’s start by acknowledging the obvious: racing like other sports will have to address the question of integrity with this new law. And strict measures will have to be put in place for people who run afoul of the rules (I would argue a lifetime ban for anyone involved).

As for foul play, the Indianapolis 500 has 33 drivers. Can a fixer really pay off 32 of them to insure his driver wins? This differs from a game or tennis match where there are essentially two parties, and a scheme can be concocted by luring one entity into a ruse.

Now, I suppose that lesser-compensated racing personnel like officials and team members would be more susceptible to a ruse. But still, I’m not sure such a scandal is that much more possible than before.

What about the commercial side of racing?

Wagering on racing isn’t terribly complex. Typically, players choose from a board of drivers with odds and bet a driver to win. So if Will Power is 5/1 to win the Indianapolis 500, a $100 bet on Power would net $500. And while legalization could change this, that’s really the extent of betting on racing as we know it.

And I have one word to say about that: BORING!!!!!

Yes, racing can have traditional bets and you can find offshore sportsbooks offering action on the Indy 500 now. But in this new ADD world of iPhones, SnapChat, and instant gratification if racing series want to leverage the legalization of sports betting, the old bet one driver and watch a three-hour race isn’t going to cut it.

Let’s say the Patriots get the ball at the 20-yard line. A bettor could wager 5/1 they will kick a FG, 10/1 Tom Brady will throw an interception, 3/1 they will score a touchdown, etc. Those are the bets that are proving most successful. Betting Patriots minus the points is SOOOOO…..2005.

If racing series are smart (I think you know my thoughts on that), they already had done much of this research before Monday. Because something that is now going to happen with this ruling is different sports leagues will be in competition with one another to sell themselves to sports books. Keep in mind, sports books can’t have an unlimited number of available bets. And they only have so many personnel devoted to setting lines. They have to know they can make payments on whatever action they take. In short, racing series will be competing with other sports in selling themselves to the books.

And the way they need to sell themselves is by offering games that will engage people. Say, a yellow flag comes out on lap 150 of the Indianapolis 500 and the top-4 drivers are as follows:

Bettors could be offered a variety of options. One could be to play. For example, between Hunter-Reay and Dixon who will be ahead on lap-180:

Books could also post four-way bets. Using Hunter-Reay and Dixon let’s include Takuma Sato running 2nd and Simon Pagenaud running 4th. The odds below for which driver is in the best position on lap-180:

Now say someone took Hunter-Reay in the first instance and Sato in the second, wagering $100 on both. Then on lap-180 the running order was:

If you’ve been following you realize that the bettor won BOTH bets. Hunter-Reay was ahead of Dixon at lap 180, and Sato was ahead of all of them. This person just netted $500.

Tying it all together

The above example is merely a hypothetical, and I’m sure people smarter than me have even more creative ideas. The point is that for racing series to truly take advantage of this new law, they need to think forward here. Simply having a few more places to make an odds bet on the Indy 500 will not maximize the potential of the Court’s ruling. Thinking about the race in segments, and developing the technology to allow players to bet on the race in real-time will be crucial. As we’ve seen with football, betting keeps viewers engaged longer. Racing will be competing with other sports for this market share.

But if racing series are able to adapt to the new world we are suddenly living in, there is money to be made and new fans to acquire. Again, the question is are they smart enough to take advantage of it.

Brian Carroccio is a senior columnist for AutoRacing1. He can be contacted at BrianC@Autoracing1.com.