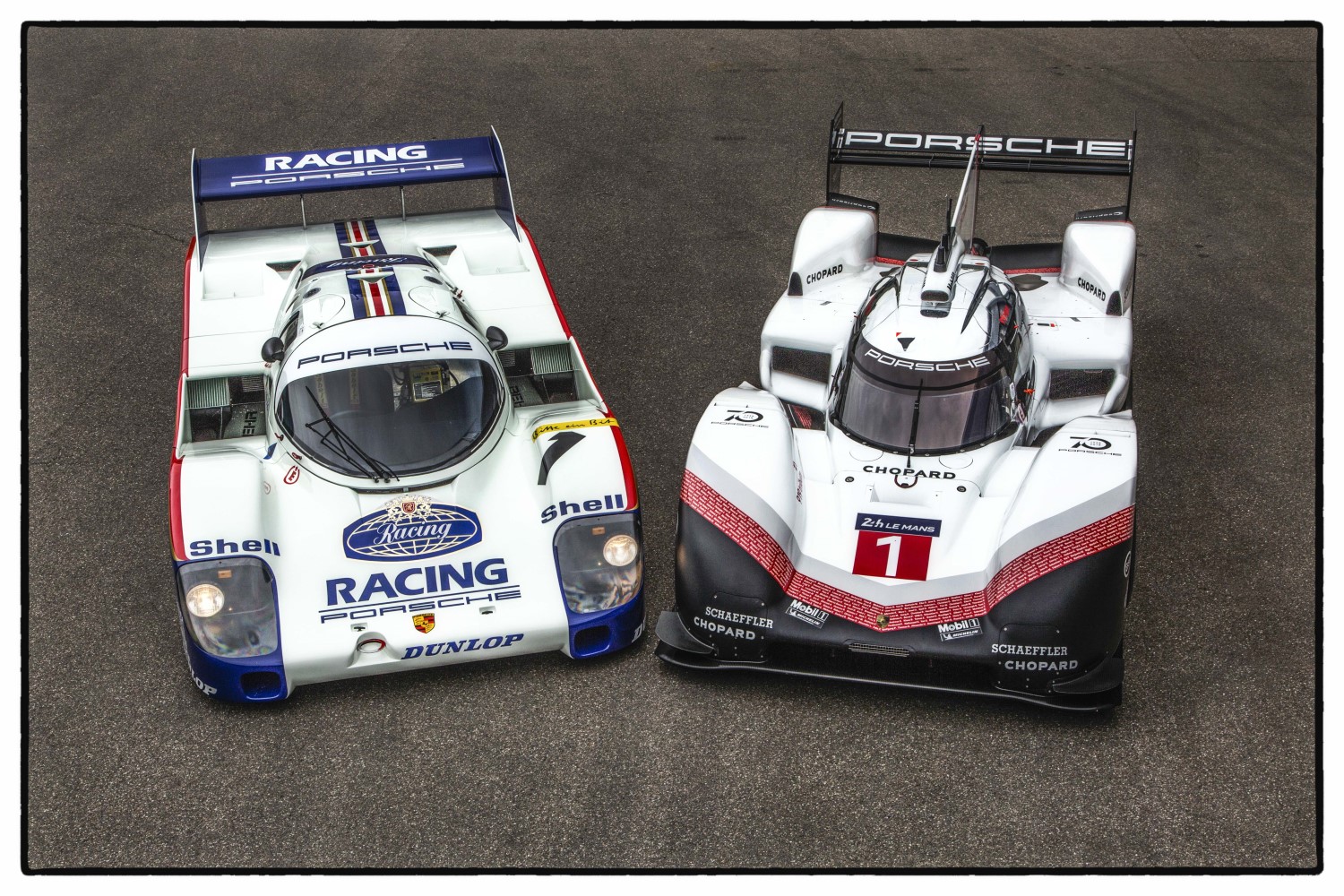 Just before the Nurburgring 24-hour race will be green flagged on May 12, Porsche presents a legendary couple to the crowd of 200,000 expected spectators: Timo Bernhard and Hans-Joachim Stuck will take the Porsche 919 Hybrid Evo and the Porsche 956 C respectively on a show run around the famous Nordschleife (literally ‘Northern Loop’). The 919 Hybrid – the Le Mans and FIA World Endurance Championship winning car of 2015, 2016 and 2017 – meets the prototype that won all titles in the World Sportscar Championship from 1982 to 1984 and still holds the outright Nordschleife track record.

The lap on the Nordschleife is the 919 Evo’s first public appearance. With the car that has been liberated from the restrictions that came from the championship regulations, Porsche recently established a new track record at Spa-Francorchamps. On April 9 2018, Porsche works driver Neel Jani (CH) lapped the 7.004 kilometer long Belgian circuit in 1:41.770 minutes. He was faster than any Formula One car ever, beating the previous record by 0.783 seconds set by Lewis Hamilton (GB) at the wheel of a Mercedes F1 W07 Hybrid, securing him pole position for last year’s Grand Prix. At the Nordschleife, the second stop of the ‘919 Tribute Tour’, however, no stopwatches are required as the two racing cars will be driving behind a safety car and bypass the start-and-finish section because of the grid formation for the 24-hour race.

Porsche, Timo Bernhard, Hans-Joachim Stuck as well as both the racing cars are connected closely to the Nurburgring and the Nordschleife.

[adinserter name="GOOGLE AD"]37-year old Timo Bernhard from Germany is the reigning FIA World Endurance Champion. On the way to the 2017 title, he has won the Le Mans 24-Hours and took his third consecutive win of the six-hour race at the Nurburgring, repeating his achievements from 2015 and 2016 at the wheel of the Porsche 919 Hybrid. Also on his tally: Five overall victories at the Nurburgring 24-Hours with Porsche, which makes him a record winner. In 2018 he now looks after his own team, Team75 Bernhard, entering a Porsche 911 GT3 R.

The Porsche works driver, who is racing himself this year in the GT Masters as well as in the GTE class at Le Mans, points out: “The Nordschleife is home for me. When I was a kid I used to accompany my father to the Eifel mountains. The complexity of this over 20 kilometer long track doesn’t compare to anything." Timo Bernhard is a passionate admirer of Stefan Bellof who died at Spa in 1985. “I’m not only impressed by Stefan Bellof’s great performances", he explains, “he must have been a really great guy. Whoever knew him seems to have adored him. His 1983 unbeaten lap record at the Nordschleife is terrific. I feel honored to accompany a historic Porsche 956 C with the 919 Evo."

On May 28 in 1983, during practice for the 1000-kilometer race, Bellof lapped the Nordschleife in a storming 6:11.13 minutes. Due to construction work, the exact track length was 20.835 kilometers at the time, which resulted in an average speed of more than 200 km/h. The 2,649 cc six-cylinder, twin turbocharged, flat engine in the 956 C produced 620 hp. Bellof’s car was chassis number 007. He was leading the race when he retired in a massive accident in the area called ‘Pflanzgarten’ but walked away unharmed. One year later, in 1984, he won the 1000-kilometer race at the Nurburgring, sharing a Rothmans Porsche 956 C with British driver Derek Bell.

On his way to his 1984 Driver’s World Endurance Championship title, Stefan Bellof once shared a 956 with German Hans-Joachim Stuck. Despite an incident by Stuck that required repairs, the couple won the Imola 1000-kilometer race.

"This race in Italy was of very high importance for me", 67 year-old Stuck recalls. “The 956 was new to me and Stefan taught me how to drive this ground effect car. I learnt an awful lot from him. When I joined Porsche, I understood why those cars were unbeatable. You had no gearbox issues, the brakes were excellent and thanks to this tremendous downforce, you could enter the corners at very high speed. Literally, the car stuck to the ground. For me it is a world-class opportunity to take the 956 once again around the Nordschleife. Emotionally, this is something hard to top."

Among Stuck’s many successes belong two Le Mans overall victories in 1986 and 1987, driving the successor to the 956, the 962 C. The Nurburgring 24-Hours he won three times when driving for BMW.

The 956 C that Stuck now takes for a lap around the Nurburgring carries chassis number 005. It is the car Jacky Ickx (BE) and Jochen Mass (DE) shared during the entire 1984 world championship season. For commercial rights reasons the name of tobacco sponsor Rothmans frequently had to be replaced by the word ‘Racing’. This was the case on Bellof’s record lap chassis 007 and is the same at the car that Stuck drives on May 12.

Just like the 956, the Porsche 919 Hybrid was the most innovative racing car of its time. The class 1 Le Mans Prototype, successfully entered in the FIA WEC from 2014 until the end of 2017, is powered by a compact two-liter turbocharged V4-cylinder engine and two different energy recovery systems. One transforms brake energy from the front axle into electricity. The second system generates electric energy from the exhaust where the gases accelerate a turbine up to 130,000 revs per minute. The electrical energy is temporarily stored in a liquid-cooled lithium ion battery. The combustion engine drives the rear axle while the electro motor boosts the front axle to accelerate the car with four-wheel drive while recuperating again energy from the exhaust system.

To prepare the 919 Evo record car, the base was the 2017 world championship winning car. Its entire hardware of the power train remained untouched. On top came developments that were prepared for the 2018 WEC but never raced after the end of 2017 withdrawal. Additionally, several aerodynamic modifications were made.