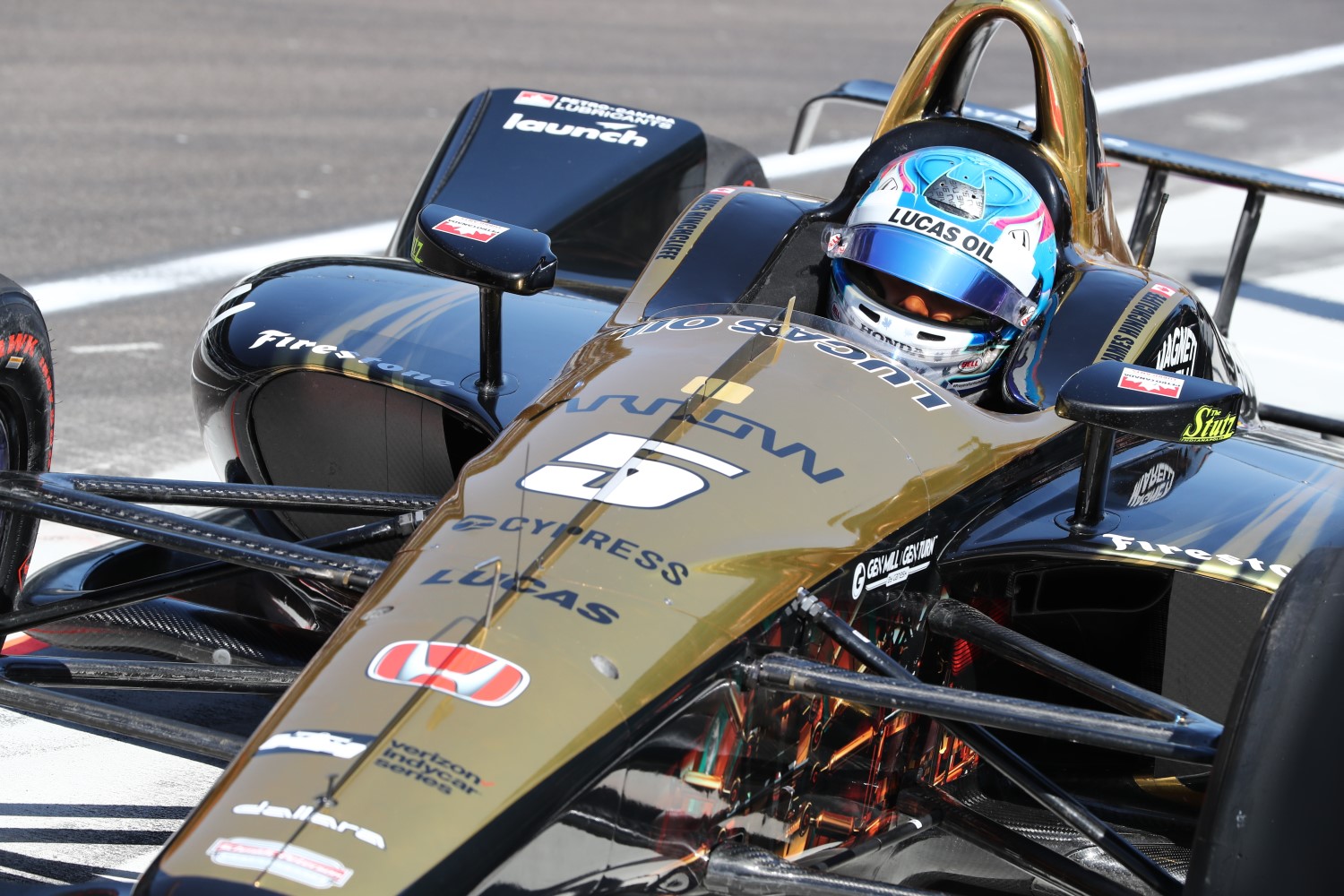 THE MODERATOR: We are joined now by three of the rookies who completed rookie orientation here on the Indianapolis Motor Speedway oval earlier this morning.

Matheus, we'll start with you, driving the No. 4 Chevy for A.J. Foyt Racing. Ultimately how excited are you to complete that phase and start your May journey?

MATHEUS LEIST: It was pretty cool. It's my first time in IndyCar here, driving an IndyCar. Last year the last time that I was here I won the Freedom 100, which was one of the biggest achievements in my career. Great to be back here. The car is feeling good. Tony had a great day yesterday. He had the car for me today.

It's definitely a big jump from Indy Lights. I think the car of course has more downforce, it's faster, but it's pretty much the same feeling as the new car. I'm happy, looking forward for the month of May.

THE MODERATOR: We had your teammate Tony Kanaan in here yesterday. We were asking him what sort of feedback and advice he is giving you. In your words, what do you feel he's been able to contribute to this experience for you?

[adinserter name="GOOGLE AD"]MATHEUS LEIST: He's with me there all the time there, in the pit lane, giving me some tips. He said to me to just take it easy today, the first day. I'm going to have the time to push hard. This place is fast, so it's easy to make mistakes here.

THE MODERATOR: Joined also by Robert Wickens, driving the No. 6 Honda for Schmidt Peterson Motorsports.

ROBERT WICKENS: James wasn't even at the track when we switched. He had no idea. He basically came in after doing some stuff this morning, I don't know what he was doing. Yeah, I was in his car. They informed him what was going on.

No, it was a tricky morning. We had a gearbox issue on my car after the first phase of the orientation. We had to scramble a little bit to get James' car ready because it wasn't scheduled to be going on track, so we had to do some quick fixes and get everything ready to go.

It wasn't ideal because we didn't really do a seat fit for me in his car. Apart from the seat going in, everything was more get on with it, get the orientation done. We were actually a little pressed for time to get all the phases through in the time allocation we had.

The guys worked hard to get the 5 car ready. Yeah, I mean, I love it around here. It was my first taste of Indianapolis. I love the oval. I ran the GP course 12 years ago. Yeah, it was good to do my first laps at the oval, full throttle laps, flat laps. It was very special. Day zero for us. Looking forward to getting May started. I think it's going to be a pretty special place when there are 33 other cars on lap.

THE MODERATOR: You did pass rookie orientation. What does that mean to you? In your experience with May and the Indianapolis Motor Speedway in general just from afar, what does it mean for you to finally be on track here?

ROBERT WICKENS: I don't know what I've gotten myself into to be honest. I never even attended the Indy 500 as a spectator before. It's just going to be an amazing month. Everyone always tells me June 1st, you roll out, you think, What the hell happened? I mean, I'm just really looking forward to taking it all in.

It's so cool that the city of Indianapolis already embraces the race so much. Even in the neighborhood I just moved to, there's Indy 500 things on their front yards, IndyCar flags flying. It's something that I've never experienced before. In DTM and Mercedes, it was a very popular championship in Germany, but outside of that it was not so much. To see Indiana embracing this race so much, it's going to be a really special feeling.

THE MODERATOR: Joined also by Kyle Kaiser, driving the No. 32 Chevrolet.

Kyle, we were laughing earlier because you were out here last year driving the IndyCar two-seater for Good Morning America. Now that you've been out there, what was the experience like?

KYLE KAISER: It was great. I think the team did an amazing job getting the car together. Like some of these guys, they have the chance to have their teammates run and get a good setup on the car. It was our first time running on this track. Hats off to them for giving me a good car that from the get-go felt awesome. That helped us get through rookie orientation quickly.

I went out, felt comfortable, we knocked out the laps. No hiccups on anything, which is exactly you want on a day like this.

THE MODERATOR: In your experience in the ladder series for the Mazda Road to Indy, what was that transfer like?

KYLE KAISER: There's definitely a noticeable speed difference. I'm not going to say it's not noticeable. The walls are coming at you quicker. You feel the speed. But you have more downforce. The grip feels really good. I've driven laps around this track enough to know where to turn in, hit my marks. It felt very similar. A lot of credit to the Mazda Road to Indy for preparing me for racing on this track. I can't wait to do more laps later in the month.

THE MODERATOR: We'll open it for questions.

Q. Robby and whoever wants to answer. These cars aren't really designed to go 7/10ths. I hear the rookies say the hardest thing to get used to is the first phase where the car wants to go fast and drive really well. How much did you experience that?
ROBERT WICKENS: You nailed it. Basically I understand you have to take this place with a lot of respect. Extremely high speeds. Not the first time in my career where you have to do a type of orientation like this. Might be a surprise to a lot of people, but to race at Nurburgring Nordschleife, it's like a one-week course. You actually have to go around in a bus, get a lesson on every single corner by certified instructors, you have to get a license to race there. This is no different.

The history here, the speeds that we're traveling, you have to take it calm and easy because if they just let us loose, you never know what can happen. At the speeds you're traveling, if something bad did happen, there can be some serious consequences.

Phase I was an interesting phase. More difficult than I thought to keep the car between 205 and 210. It's the first time in my life that I was lifting the entire straight to then go full throttle on a corner, which was a little weird. But then you learn. I thought the 210 to 215 phase was a really good phase to learn. When you're going that slow, you're not really taking the line, the car kind of just goes where it wants, you're kind of going too slowly. Once you got up to around the 215 mark, it started reacting, feeling balance issues with the car. Before you're more or less cruising around at a speed where the car is not happy, they're set to be going 220, 225. We actually have a lot less downforce on the car than what we would be when we're doing normal laps. It was kind of a bizarre feeling.

I get why they did it. You have to take precautions. Happy it's done.

MATHEUS LEIST: I think we prepare very well actually. When I was able to push, I mean, 215 plus, I was everything ready. I was comfortable in the car and everything. Was not difficult to take it flat out. I think the program was pretty good actually.

KYLE KAISER: I definitely agree. It was more difficult probably in Phase I than it was for the rest of it because you have to consciously come out of it where your gut instinct is I just want to go flat right now.

I do like Phase II. I thought we had a good rhythm. The car was feeling good. When it was time to go flat out, it felt comfortable. So I agree with the program and getting people ready to run at those speeds.

THE MODERATOR: Gentlemen, thank you very much.