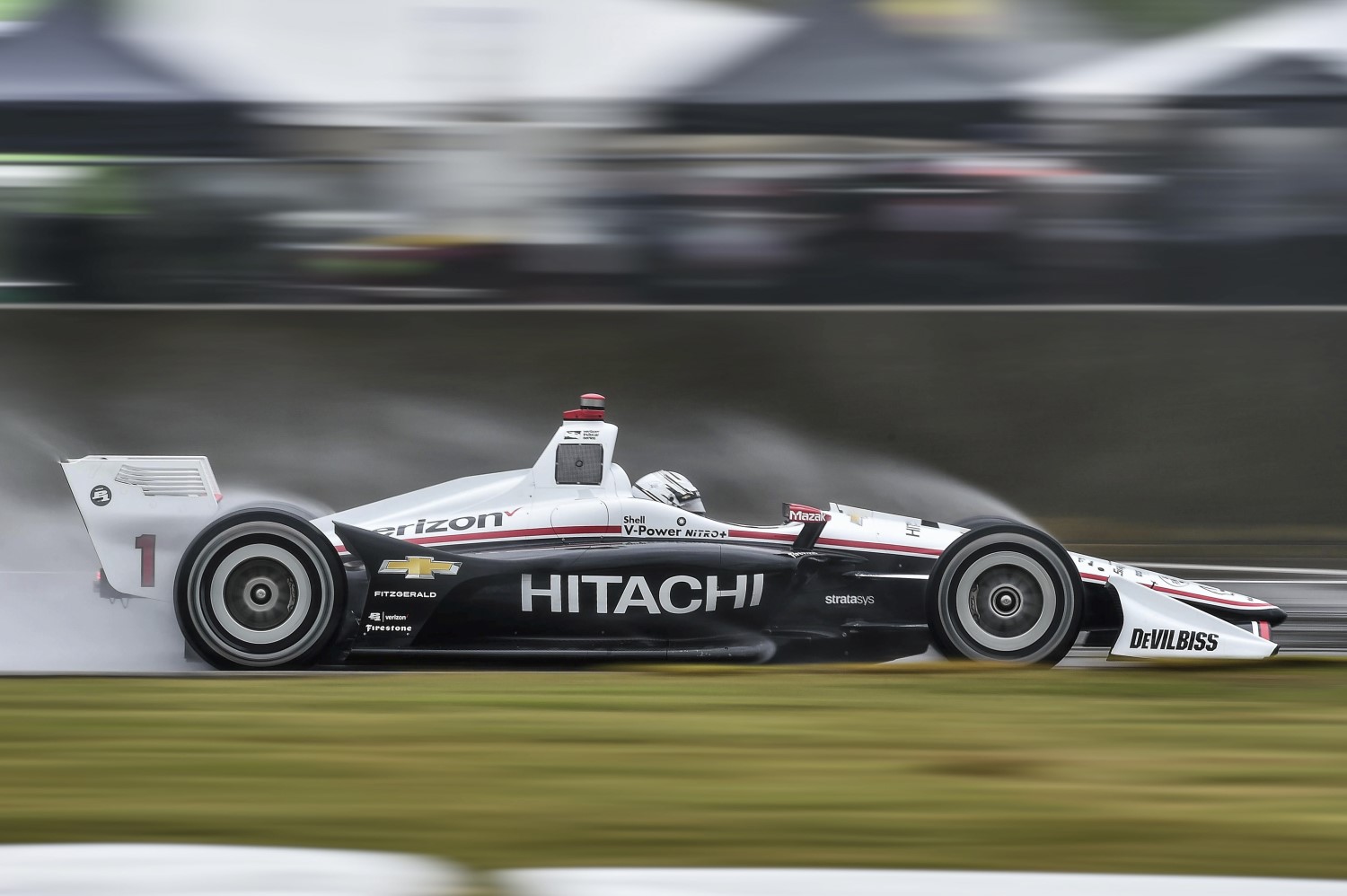 THE MODERATOR: We are joined by Verizon IndyCar Series points leader Alexander Rossi, driving the No. 27 Honda for Andretti Autosport.

Alex, a crazy day for you guys. Take us through what you were seeing, I hear not much, on the restart, leading into tomorrow's race, and your thoughts.

ALEXANDER ROSSI: Absolutely nothing is what I was seeing, which wasn't great. Under that first yellow there, we were asked to go green again. I didn't think it was the right thing to do. We did. Obviously the result of that was the car hydroplaning off.

I think definitely the right decision was made to red flag the race. It's a very difficult position for everyone to be in. It's never the result that you want. But safety is obviously a priority.

I think everyone did a good job considering the conditions of looking out for each other. Not being able to see is not doing anybody any good. It is hard for everyone, but glad that we're all in one piece and try again later.

[adinserter name="GOOGLE AD"]Josef, in a good position for you, out in front of everybody. A little bit different of a view than most cars behind you. What are your thoughts on the conditions of the track today and navigating this difficult situation?

JOSEF NEWGARDEN: It's tough because we have so many people that come out here to watch us. We want to put on a good race. We want to put in a show. So calling the race, running around behind the pace car not running, it's tough, it's tough to do that.

But I think it was the right thing in the end. When we started the race, the conditions were okay. You could run at that level of rain. Then it intensified right before that first caution. I think when the caution came out, it got to a point where it was just too much. There was too much puddling and pooling of water on every straightaway. Then the rivers started flowing, high-speed compressions in turns one and two, fast corner, 12 and 13, fast corner where the river starts to form.

Just tough. I mean, look, we love racing in the rain. It's got nothing to do with not wanting to run in the rain, not being able to do that. It's this type of track with this water level was too much to race today. We've run here in the rain before. It intensified to the point where you're starting to get in a situation where it's going to take it out of the drivers' hands.

What happened with Will I don't think is a driver error. I don't know how anyone is going to drive hydroplaning on the front straightaway. I think you would have had that for the rest of the track, too.

A tough situation. Thanks for the fans that came out and supported us. Hopefully we'll get some people back tomorrow and we'll get the show in and put on a great event.

Q. A lot of people say going out there and running under caution, these points are important that you get today as they will be mid September at Sonoma. There's a lot of points on the line in these races. How valuable is it to have a fair competition?
ALEXANDER ROSSI: I think it's very valuable. This is one of the races for the championship, right? The main focus now since the race has been called is to make sure the situation is dealt with correctly so that everyone can come back tomorrow and have a fair shot at where they were in the race. That's the main concern probably of all of us, the race getting postponed till the next day.

Like Josef said, it's obviously not something you want to have happen. At the same time you want it to be a race that's still counted as one that's valuable in the championship.

Q. Josef, to have competition, not just be running around in the rain.
JOSEF NEWGARDEN: Look, I was calling for us to not run. For me, I was in the easiest situation. I was leading the race, had the best viewpoint. We do another 14 minutes under caution, we call the thing halfway from a distance standpoint, or time standpoint, sorry, we pick up the win. It's more advantageous for us to get it in. I didn't want to do that. I didn't think the conditions were right.

The weather tomorrow is going to be a lot better and we'll get a full race in. I actually don't know what the procedure is. We'll get rest of the race in. It will be a good show and be if a fair fight for everyone.

THE MODERATOR: All those details and circumstances will come together in the next hour or two.

Q. Last race that rain kind of interfered with Watkins Glen. You were on opposite sides of the spectrum. Can you tell us tomorrow how it will be different?
ALEXANDER ROSSI: No, because I don't really know what the weather is tomorrow, to be honest with you. I don't really count that as a winning race. We all pitted at the end of lap one to come in for slicks. I think that's very different circumstances.

Q. Alex, since you were behind in traffic, how much worse was the visibility with this car versus previous generation cars?
ALEXANDER ROSSI: Again, I can't answer that. This is the first actual wet running I've done besides a Sunday morning warmup, so I don't know.

It was very bad. But I don't know if that has to do with the generation of car.

Q. We've seen IndyCars and Formula 1 cars run in the rain many times. At what point does it get too bad to run? Does the elevation change on this track make it even more difficult with puddling situations? At what point is it too dangerous?
JOSEF NEWGARDEN: Yeah, I mean, I think that's what you had today. Like I said, with the level of rain at the beginning of race was okay. If we maintain that level of water, you can run that till the end of the race, no problem. Once it intensified it started pooling on the straightaways, that type of hydroplaning we were getting is a dangerous situation.

We would love to run in it, but you're taking it out of our hands at that point. Things are going to happen when you hydroplane that you can't control. That's not a driver talent thing you're dealing with.

That's what I would say. Yeah, this track is a little bit worse just from the elevation standpoint because you get these on-camera, off-camera changes, these crests that you deal with that pool water in these bowl sections.

It's not a knock on the facility. It's one of my favorite racetracks we go to run at.

JOSEF NEWGARDEN: No, I love it.

ALEXANDER ROSSI: We can tell. It's nice for you.

JOSEF NEWGARDEN: Look, we want to run. It was just too much today when the rain intensified.

Q. NASCAR doesn't race in the rain except on road courses. How different is it racing in the rain compared to racing on slicks? I write for NASCAR.
ALEXANDER ROSSI: Thanks for coming and joining the IndyCar family.

I think it's very different. I guess the driving talent still kind of works. I mean, if you're quick in the dry, odds are you're probably going to be pretty quick in the wet. What changes is the car setup doesn't matter as much. So when you're running dry, a 10th of a second, two 10ths of a second can really be made from the car setup. Whereas in the wet, there's varying different setups out there, I'm not sure you saw a lot of spread of lap times. That's more related to visibility, guys being able to find the grip and such. It becomes more of a driver-oriented kind of result sometimes in the wet.

Certainly like to have the pace of the guy next to you. I was happy it was raining because no doubt we had the pace in the dry that could be comparable in the wet, if that makes sense.

Q. How does this compare to other times when you've had to race in the rain either in IndyCar or other championships? Has there been a time where it's been worse?
JOSEF NEWGARDEN: Yeah, we've had times. I remember Toronto was so bad with visibility three, four years ago. Everybody thought it was fine, but it wasn't. That's the only other time I can think of where either visibility or hydroplaning was too much of an issue.

Q. Because your cars have been red flagged and lined up in pit lane, you come back tomorrow, are the teams allowed to change from the wet setup into a dry setup?
JOSEF NEWGARDEN: We don't know the details yet. IndyCar will release it. I just got told 10 minutes ago we are running tomorrow. I don't know the details personally. I don't think any of us do.

Q. Have you ever run on a Monday? How do you prepare yourself? Now that you have another day, how do y'all prepare yourselves to race tomorrow?
ALEXANDER ROSSI: Go to the grocery store again, which is great (smiling).

I really don't think the mindset changes, to be honest with you. You go through your normal prerace routine tonight as you would have last night. We raced, what, eight weeks later in Texas two years ago. All the guys at some point in their career have had a delayed race. They're all professionals, so I don't think it's going to affect anyone, I don't think.

THE MODERATOR: Guys, thank you.