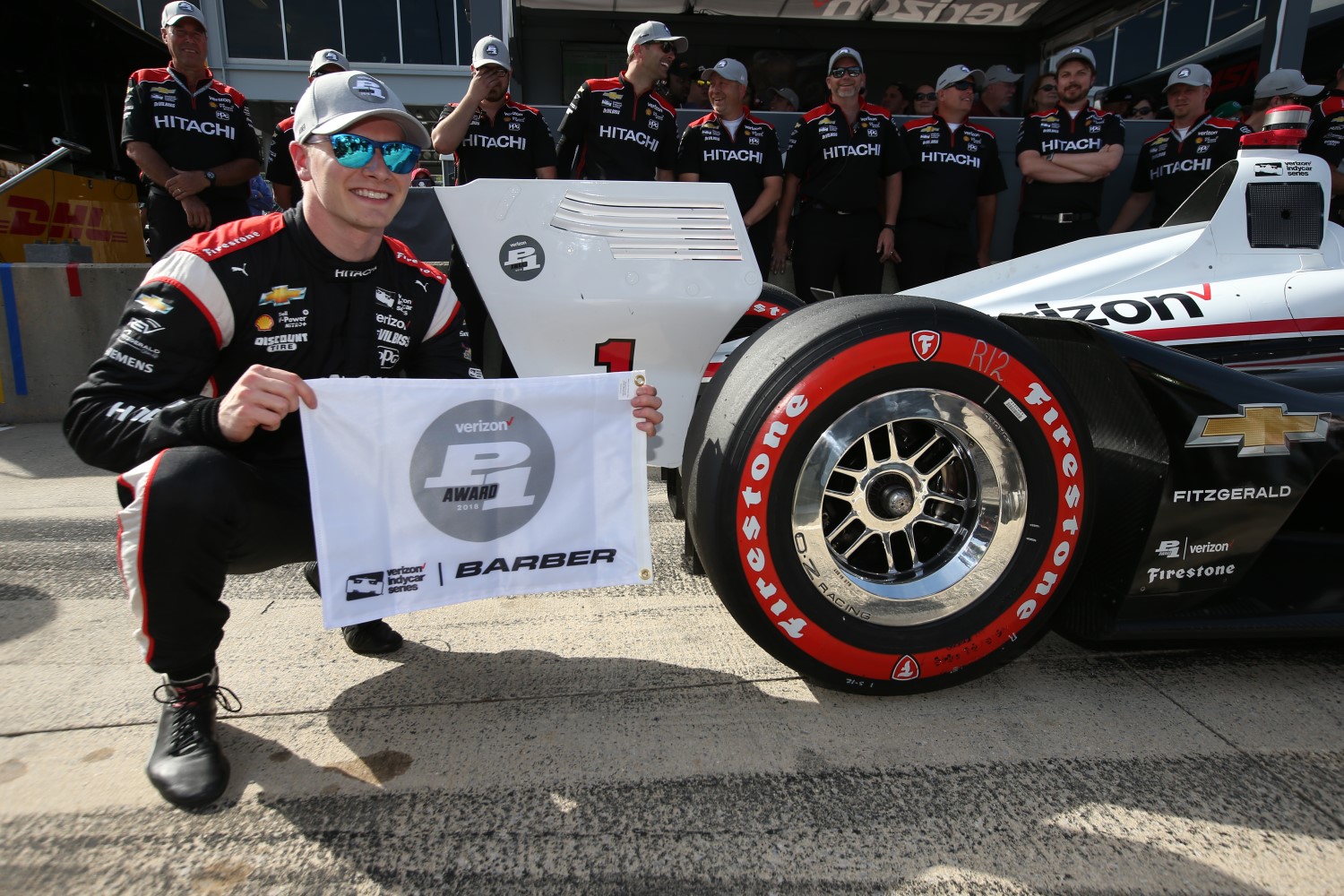 Joined by Will Power, who will be starting second. Will is a two-time winner here, four poles. Will had the fastest time of the weekend earlier this weekend with practice three and has qualified for all three Firestone Fast Sixes so far this season.

Will, I know you were hoping to get your fifth pole here. Do you feel like you got everything out of the car?

THE MODERATOR: You have some strong teammates. Does that help you in a race where weather might play a role?

WILL POWER: Yeah, no, I just think it's going to be difficult for everyone.

THE MODERATOR: We'll open it up for questions for Will.

Q. How much does rain throw all the strategy out the window?
WILL POWER: Well, yeah, I mean, we've run a dry setup in the past. We ran a rain setup, then it dried up. A rain setup, rain obviously changes the strategy a lot. Just have to concentrate more.

Q. (Question regarding poles.)
WILL POWER: It's been just crazy. I've been, like, there. I've sat on the front row, just not there in the Fast Six. It's getting closer. Down to hundredths. I think I should be able to get one.

Q. (Question regarding Josef.)
WILL POWER: It's really interesting. We've made big setup changes because the cars are very different to what we've been running. I think everyone is on their toes to get the philosophy right each weekend.

THE MODERATOR: Will, thank you very much. Good luck tomorrow.

WILL POWER: Thank you.

[adinserter name="GOOGLE AD"]THE MODERATOR: We welcome in our next two qualifiers.

Ryan Hunter-Reay, take us through your run.

RYAN HUNTER-REAY: Typical for the Verizon IndyCar Series, it's been very tight here. Two-hundredths of a second can make a difference. We know in qualifying it's going to be very tight. We made some good changes to the car a little bit today. The track temps came up, wind direction changed, it made for tricky qualifying times.

In the end, I think we had a pretty good run. Could have done just a little bit better. Seemed like group two got a little gift there with new reds at the end. Hats off to Newgarden. That was impressive.

Scott, qualifying position is so important here. Do you feel like you'll be able to work your way up to the front?

Sebastien, I know qualifying didn't go the way you were expecting it to go. How much does it help you to come out to have a good start to the weekend?

SEBASTIEN BOURDAIS: Every weekend is a new beginning. The run was pretty solid. All weekend we just try the best. A little better in comparison to everybody else. We weren't switching on the tires as well.

SEBASTIEN BOURDAIS: I wish I knew. It would help us to fix the car in weather conditions.

Josef, the lap at the end of the qualifying session was a monster lap. What came together.

JOSEF NEWGARDEN: We just had a good car, for sure. It's been fast all weekend. We didn't have the best practice three, but I think everybody closed up a lot. Andretti guys closed up a lot.

Like I said, trying to put it together was the big thing for us. We tried to make a car that could be drivable. It sounds silly, but this morning it was tough to put a lap together. Creating drivability, comfort in the car is what we focused on. Felt pretty good in qualifying.

I think I had a really good set of tires with the reds, the second set were pretty good. Pretty excited with that. Still pretty strong in the Fast Six.

THE MODERATOR: Questions for the group.

Q. Four different teams represented. That says a lot about the competition.
JOSEF NEWGARDEN: For sure, it's difficult for everyone with the points, too. I think you're going to see that this year. Until everyone settles in, you're going to have a lot of up and down amongst the group. Even this weekend, people are figuring things out.

It's just tough. It's really competitive. Everyone seems to have pretty decent cars. Yeah, it's just difficult, which is a good thing. I think it's great for the fans. If there's insecurity for everybody, you don't know who is going to be strong.

Q. With the weather forecasted for tomorrow, all four of you have experience driving on this track in the rain. Makes it more important to start in the front, doesn't it?
JOSEF NEWGARDEN: Yeah, for sure (laughter). To get in the Fast Six, it helps a lot. If it's going to be wet all day tomorrow, you're going to want to be out front. There's no guarantee for that. You can go backwards fast. You're relying on peripheral vision to get around the racetrack. Just depending on how aggressive the rain is, it will be a benefit to be all the way up front.

Q. When you run in wet races, does the rain slip over you or get sucked in?
RYAN HUNTER-REAY: If it's raining raining, you get soaked. You do the best you can. It can be an issue, for sure.

THE MODERATOR: We welcome in James Hinchcliffe, starting fifth in tomorrow's race. Best finish of sixth here. Already one spot further up in the grid. Do you feel you'll be able to move up front despite the crazy weather we're expecting?

JAMES HINCHCLIFFE: A day like tomorrow, it's a lottery what to expect. Obviously being in the top part of the grid helps a lot. We saw that in 2014. There was, like, five seconds in between cars.

We'll see. It's a tricky track, fast corners. Also not sure what to expect out of the tires. Part of the teams did a test here weeks ago. It's definitely beneficial having a teammate.

THE MODERATOR: What can you do to prepare as much as you can with the rain?

JAMES HINCHCLIFFE: Driving in the rain, driving an IndyCar in the rain is one of the most challenges things we have to do. The big thing is trying to back off the pedals.

THE MODERATOR: If it doesn't rain, do you just go to the original plan?

JAMES HINCHCLIFFE: That would be really cool. That would be neat. I'd like that. We have seen it before, you're right. There's a chance it will go dry. It really can do anything.