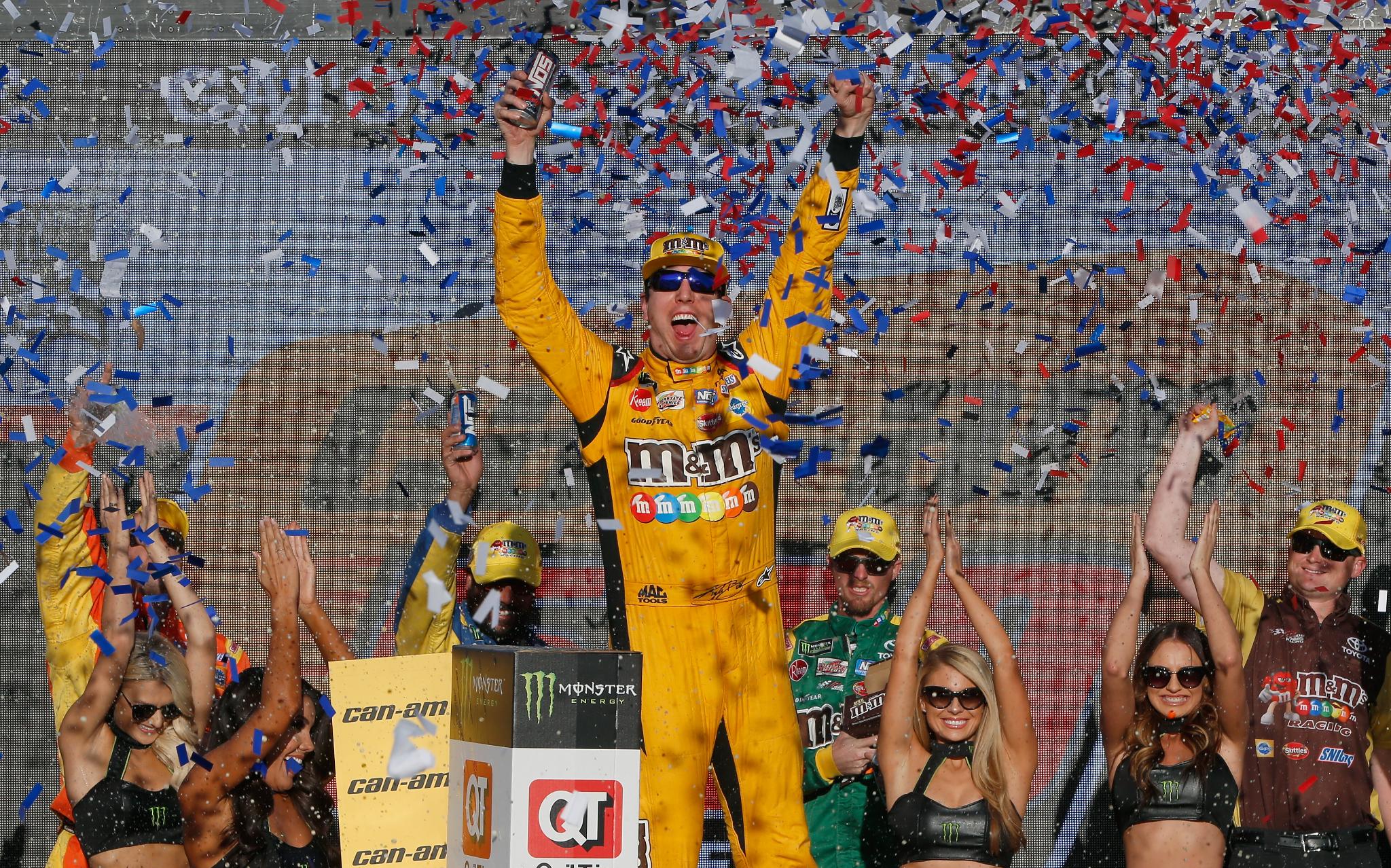 Holding off Brad Keselowski after a restart with 12 laps left in Sunday's Can-Am 500 at ISM Raceway, Kyle Busch claimed his eighth Monster Energy NASCAR Cup Series victory of the season and led NASCAR's Big Three into the Championship 4 race at Homestead-Miami Speedway.

After a wreck on Lap 269 of 312 ended the championship hopes of Kurt Busch and Chase Elliott—both of whom had been in the mix throughout the day—Busch grabbed the lead from Joe Gibbs Racing teammate Erik Jones on Lap 277 and held it the rest of the way, through two subsequent cautions and restarts.

Busch's victory, the 51st of his career and his second at the one-mile track—coming 13 years after his first one—tied him for the series lead with Kevin Harvick, who had to overcome an early flat tire to join Busch, Martinsville winner Joey Logano and Martin Truex Jr. (14th on Sunday) in the Championship 4 Round.

The 51st win broke a tie with NASCAR Hall of Famers Junior Johnson and Ned Jarrett, leaving Busch alone in 11th place on the all-time list.

By the time he took the checkered flag .501 seconds ahead of Keselowski, Busch had already clinched a spot in the title race on points.

[adinserter name="GOOGLE AD"] "What a day! What a race!" Busch said. "It's an awesome team and awesome group of guys. Can't say enough about everybody at Joe Gibbs Racing—all the men and women there that work so hard to prepare such great race cars that I get to drive."

Busch, who won the 2015 championship after missing the first 11 events of the season because of injuries sustained in an accident at Daytona, now carries significant momentum into the championship race.

"I'd like to think it gives us a lot, but I don't know–talk is cheap. We've got to be able to go out there and perform and just do what we need to do. Being able to do what we did here today was certainly beneficial.

"I didn't think we were the best car, but we survived, and we did what we needed to do today. It's just about getting to next week, and once we were locked in, it was ‘All bets are off, and it's time to go.'"

Truex didn't have a contending car, but the reigning series champion did an admirable job avoiding the sort of trouble that dashed the hopes of other championship contenders.

Clint Bowyer exited early, thanks to a flat left rear tire that sent him hard into the Turn 3 wall on Lap 133. Kurt Busch led 52 laps and overcame a one-lap penalty for passing the pace car at the entrance to pit road under caution on Lap 135.

After regaining the lost lap, however, Busch was fighting for the lead after a restart on Lap 269 when the No. 11 Toyota of Denny Hamlin ran him into the outside wall. Busch's No. 41 Ford bounced off the barrier and collected the No. 9 Chevrolet of Chase Elliott, who had led 16 laps and won the first stage.

With Kurt Busch and Elliott out of contention, Harvick was assured of a Championship 4 berth unless Stewart-Haas Racing teammate Aric Almirola won the race. Almirola lined up second to Kyle Busch for the final restart on Lap 301 but faded to fourth at the finish, and Harvick was in.

"That flat tire, just leading the stage there, coming to the white, and the tire goes flat," Harvick said of his early issue. "That just put us behind and that was really the turning point in our day, to not have everything go right.

"I mean, we got ourselves back in contention there, and we're going in the right direction and wound up just finding a spot at the end to just survive there and get to the finish."

Byron clinched Sunoco Rookie of the Year honors for the series.

"We haven't had very good runs, to be honest, the whole year, but this run we kind of went a completely different direction with what we were doing and it seemed to pay off, and just kind of had a solid weekend other than qualifying," Byron said.

"Got some damage there, but we were able to come back, I guess, and finish ninth, so I guess that's decent, and going to Homestead next week."