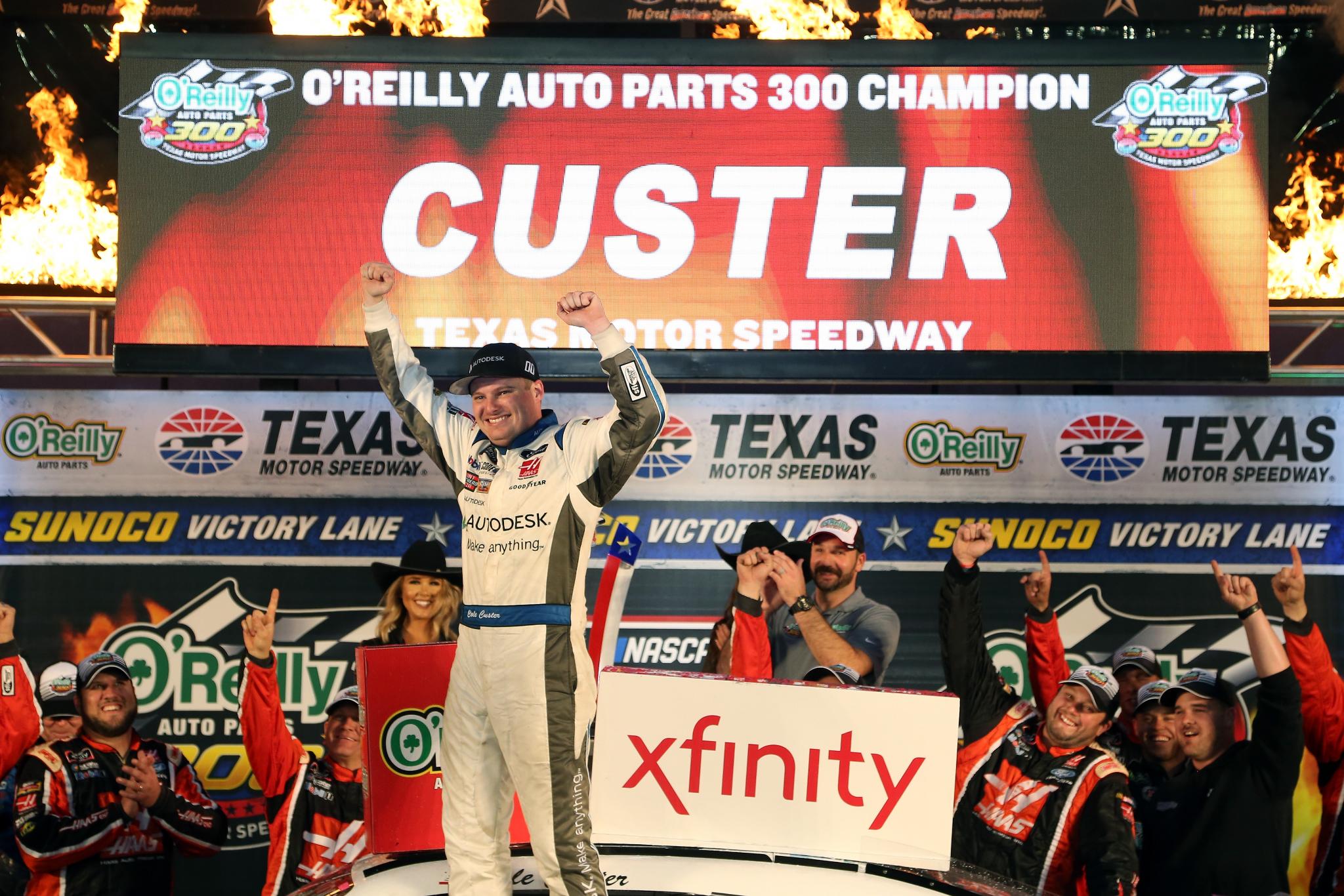 In a race that produced a last-lap pass for the win, a record 13 cautions and an unmitigated disaster for favorite son Christopher Bell, Cole Custer moved past Tyler Reddick on the backstretch to win Saturday's O'Reilly Auto Parts 300 at Texas Motor Speedway.

Custer's first victory of the season gave the driver of the No. 00 Stewart-Haas Racing Ford an automatic berth in the Nov. 17 NASCAR Xfinity Series Championship 4 race at Homestead-Miami Speedway, where Custer dominated last year in winning for the first time in the series.

Reddick led the field to green with two laps left, after the 13th caution, and held the top spot until Custer mounted a strong run off Turn 2 on Lap 200. The cars made side-to-side contact on the backstretch before Reddick surrendered the position, and Custer held on to win by .162 seconds, the third closest finish in an Xfinity Series race at Texas.

With his first victory of the season and the second of his career, Custer is the first of the Round of 8 drivers to clinch a chance at the championship in the season finale.

"I can't believe it," Custer said. "I did all I could and drove in deeper than I had all weekend into Turn 1 (on the final lap) trying to get on (Reddick's) bumper, and it worked out.

[adinserter name="GOOGLE AD"] "We're going to Homestead, and I think we have a great chance to win it. It's just awesome. We haven't won this year, but we've been so close. It's been frustrating, but we've kept going. There's no better time to do it."

Though Bell recovered to finish fourth in Stage 1 and fifth in Stage 2, his recovery was short-lived. The coup de grace came on Lap 133 when eventual third-place finisher Austin Cindric pushed up the track slightly, clipped the back-left quarter of Bell's No. 20 Toyota and sent it sliding into the outside wall.

Resulting suspension damage knocked Bell out of the race in 32nd place at the speedway closest to his Norman, Oklahoma, home.

"It caught me off guard," Bell said of the Lap 1 spin. "You saw the same thing from the No. 7 (Allgaier) at Kansas. I didn't feel like I was up to speed at all. The next thing I knew, I spun out.

"I don't know, it has to be the tire combination. It's tricky. There wasn't much room for error."

With the Playoff field to be cut from eight drivers to four next Saturday at Phoenix, Bell Faces a 34-point deficit to Daniel Hemric (10th Saturday), who holds fourth place in the standings. A six-time winner as a Sunoco rookie this season, Bell, for practical purposes, must win again.

"This format, it's very tough and it creates a lot of drama," Bell said. "I've always been proud of myself for winning races, and I've won six races this year, and I've got a chance to win two more.

In a race in which fortunes changed radically with differing pit strategies, Hemric won the first stage. But his luck soon took a turn for the worse. Hemric fell back after a Lap 194 restart and was knocked sideways when Richard Childress Racing teammate Shane Lee lost control underneath Hemric's Chevrolet in Turn 3.

Aside from Custer, no one in the top eight has much breathing room heading to Phoenix. Reddick has a 20-point edge over fifth-place Allgaier, who came home fifth on Saturday. Veteran Elliott Sadler, who ran eighth, is 13 points ahead of Allgaier, his JR Motorsports teammate. Hemric has a 12-point cushion.

But even huge leads can evaporate in a single corner, as Bell has discovered in the last two races.

Last in the Playoff standings and 61 points out of fourth, Cindric must win at ISM Raceway at Phoenix to advance. That's nothing new for the driver of the No. 22 Team Penske Ford, who finished .316 seconds behind Custer.

"I've been in a must-win position since Kansas," Cindric said. "For me, that hasn't changed."