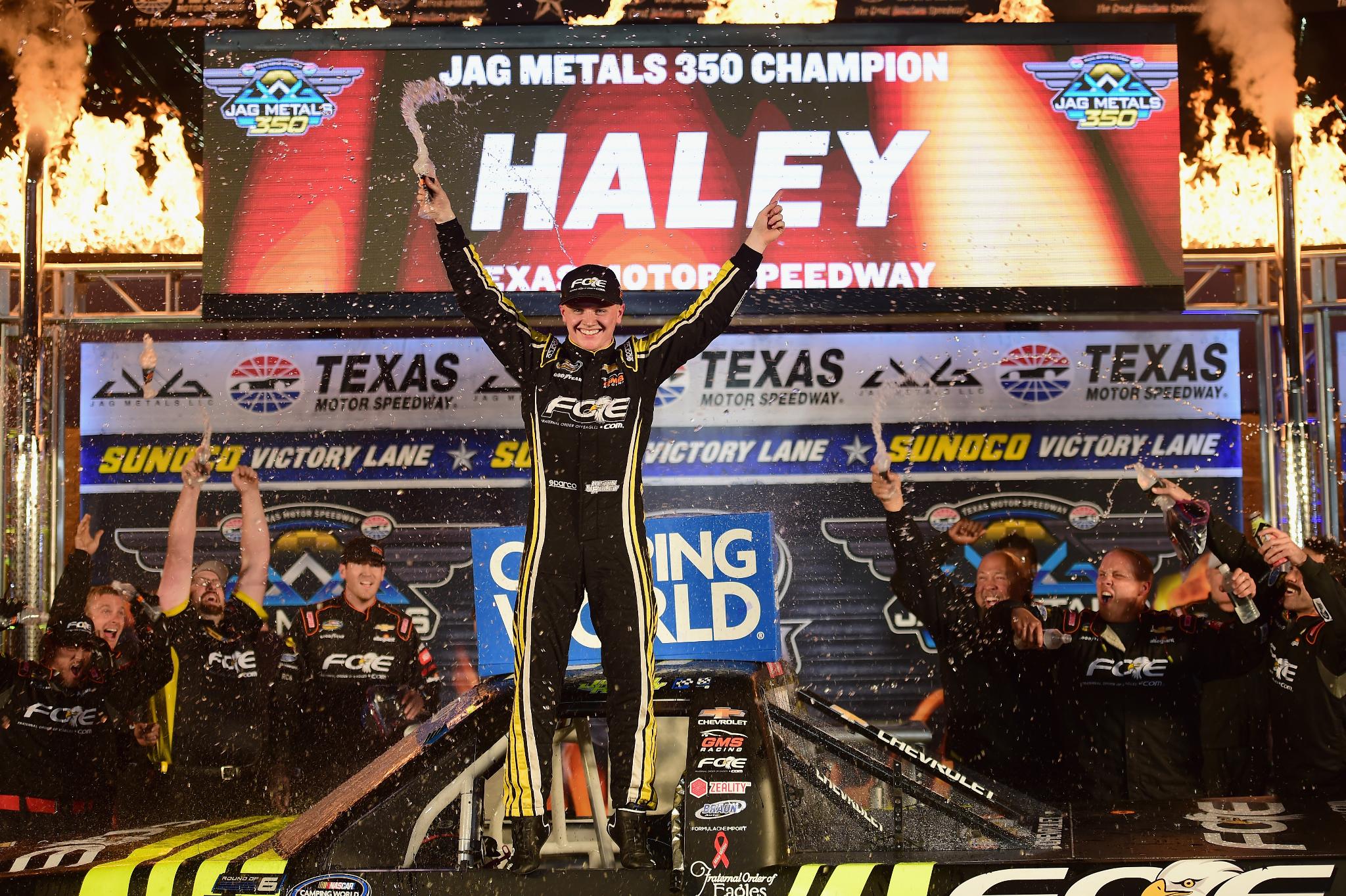 Todd Gilliland's heartbreak was serendipity for Justin Haley, who staked out his place in the NASCAR Camping World Truck Series Championship 4 race with a stunning victory Friday night at Texas Motor Speedway.

Gilliland was half a lap away from collecting his first series win in the Jag Metals 350 when his No. 4 Toyota sputtered on the backstretch and ran out of fuel. Haley, who was 1.3 seconds back on the white-flag lap, surged past Gilliland and crossed the finish line 8.133 seconds ahead of runner-up Ben Rhodes.

With his third victory of the season and his second in the Playoffs, Haley joined GMS Racing teammate Johnny Sauter for a chance to win the series title in the Nov. 16 season finale at Homestead-Miami Speedway. That leaves two spots available to the remaining six competitors.

"That was amazing," the 19-year-old Haley said in Victory Lane. "I thought we had it lost there. I didn't quite maximize my pit road (on the final green-flag stop)… This is a once-in-a lifetime opportunity. To get two Chevrolets—me and Johnny—back to back to Miami, that's what we want.

[adinserter name="GOOGLE AD"]"We've got a 50-percent chance of winning it."

Gilliland took on one can of fuel when he came to pit road on Lap 115 of 147, and his team calculated—erroneously, as it turned out—that he had enough gas to go to Lap 150. Haley stopped under green seven laps later and was five seconds behind Gilliland when the pit sequence cycled out.

Haley gradually gained ground over the final 25 laps but would have run out of time had Gilliland not run out of fuel.

"I didn't know we were close on fuel at all," said Gilliland, who hit the wall in qualifying and had to start from the rear of the field after his team made unapproved adjustments to the truck. "It's horrible. I'm incredibly disappointed. I still feel like we could have been faster if I hadn't wrecked during qualifying.

"So many things… we win and lose as a team. But I'm super proud to be in that position, to be fighting for wins every now and then. I feel like we're on the verge of being a competitor week-in and week-out. I think we're getting there every week, and that's what I'm really proud of, but at the same time, it really hurts."

Gilliland rolled across the stripe in fourth place behind playoff driver Brett Moffitt, who holds third in the Playoff standings behind Sauter (last week's winner at Martinsville) and Haley.

After a change in gear rules, Moffitt was running the crate NT-1 engine for the first time, in lieu of a Mark Cronquist-built Toyota engine.

"It's different," Moffitt said. "I wouldn't say good, bad or either, but it's certainly different… We lost a lot of track position, and it doesn't matter what you have under the hood here at Texas, you're not going to make up that many spots.

"We just have to execute a better race and move forward. It certainly helps to run good, but when you're in the Playoffs like this, you have to get back to Victory Lane."

Noah Gragson, who finished 10th, is the fourth in the Playoff standings, 18 points ahead of Grant Enfinger, who ran out of fuel on the final lap and finished 12th, and 23 ahead of two-time series champion Matt Crafton, who ran ninth.