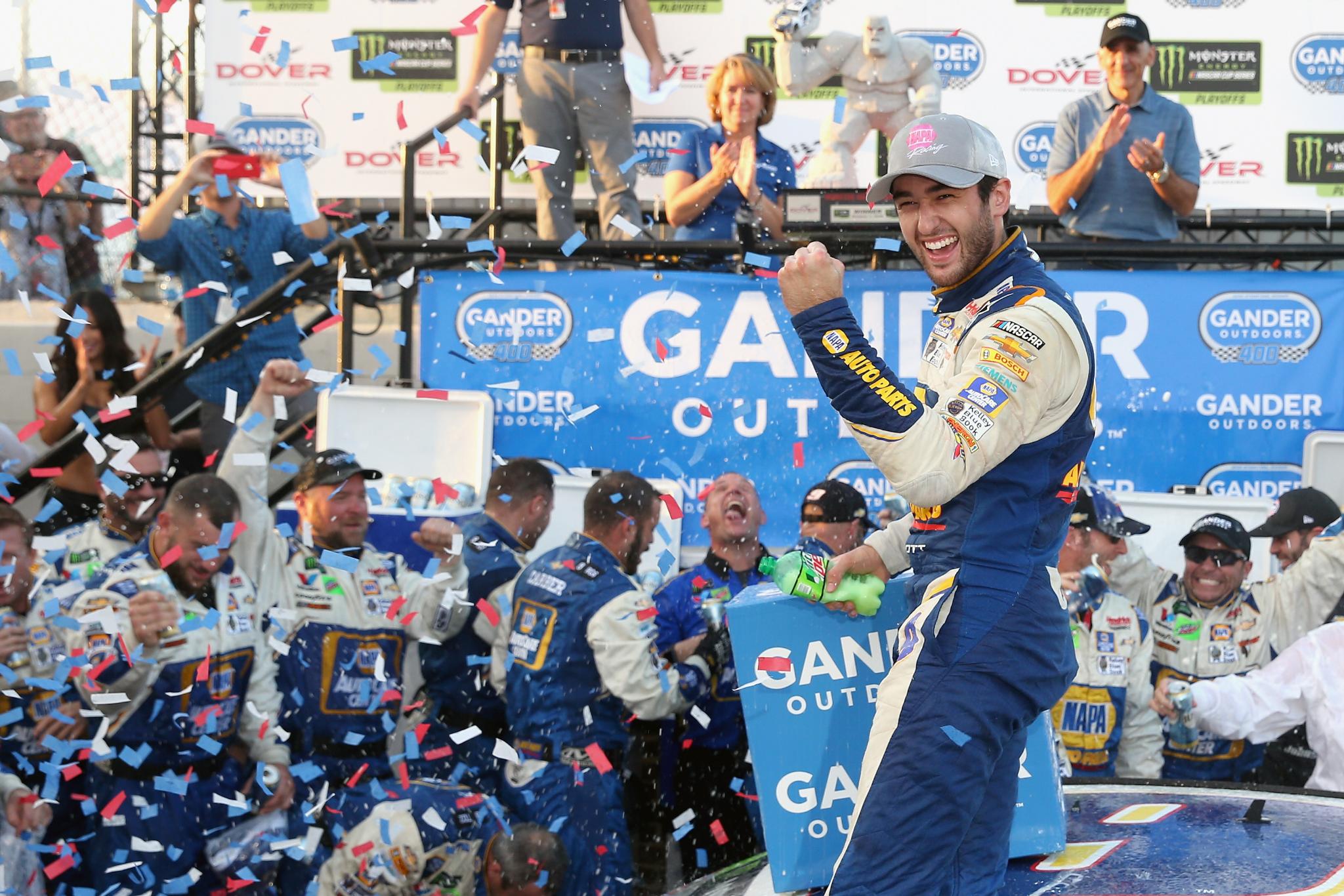 What looked like a Stewart-Haas Racing victory parade for much of Sunday afternoon ended in a wild overtime scramble, with Chase Elliott taking the checkered flag in the Gander Outdoors 400 at Dover International Speedway.

On considerably older tires, Elliott pulled ahead cleared runner-up Denny Hamlin through Turns 1 and 2 after a restart on Lap 403 and powered his No. 9 Hendrick Motorsports Chevrolet across the finish line .265 second ahead of Hamlin’s Toyota.

With the victory—his second of the season and the second of his career—Elliott punched his ticket into the Round of 8 in the Monster Energy NASCAR Cup Series Playoffs, extricating himself from the bottom four in the postseason standings.

"This was a lot about perseverance," said Elliott, who recovered from a penalty for an uncontrolled tire incurred during a yellow-flag pit stop on Lap 123. "We had a penalty early and fell behind and luckily had a good enough car and good strategy to get back (to the front). What a day!"

The win was a satisfying turnaround from the same race last year, when Elliott had victory in his sights, only to be tracked down and passed by Kyle Busch on the next-to-last lap.

"Definitely think it makes it sweeter, for sure," Elliott said. "You don't appreciate it in those moments, but to come back here and have the day we had…

"We get to move on to the next round, and I don't have to worry about Talladega next week. It's just a hell of a day."

The move that won the race was crew chief Alan Gustafson’s decision to keep Elliott on the track with tires that were more than 50 laps old, when most of the other lead-lap cars opted to pit on Lap 393 after Clint Bowyer’s Ford slammed into the Turn 4 wall one lap earlier.

Elliott led the field to a restart on Lap 397, but on the backstretch during that circuit, Aric Almirola nicked the outside wall and started a chain-reaction collision that also damaged the cars of fellow Playoff drivers Brad Keselowski, Alex Bowman, Martin Truex Jr. and Ryan Blaney.

NASCAR red-flagged the race, and Elliott outran Hamlin in an overtime that extended the event four laps beyond its scheduled distance. The only laps Elliott led were the last 11.

Kevin Harvick, on the other hand, was out front for 286 of the 404 laps in a No. 4 Ford that was the clear class of the field. Harvick swept the first two stages, as he had done during his June victory at the Monster Mile and appeared headed for another perfect afternoon, but the 2014 series champion had to return to pit road under green for an extra tire change after a flying lug nut knocked the valve stem off Harvick’s left rear tire.

Harvick regained the lap he lost under a debris caution called on Lap 339, but he couldn’t work his way back to the front before the race ended.

Joey Logano dodged the Almirola wreck and finished third, followed by Erik Jones, Kurt Busch and Harvick. Austin Dillon ran seventh, one spot ahead of Kyle Busch, who snared his top 10 despite dealing with a malfunctioning track bar adjuster throughout the afternoon.

"You use it (the track bar) a lot here because of the tire wear and tire build-up," Busch said. "Cars get loose over courses of the run. Not having that and not knowing where it was (set), I had no clue where it was throughout the whole day. We came in here poised to not run very well, and that’s how we did."

For a long stretch after a restart on Lap 248, the four Stewart-Haas drivers—Harvick, Almirola, Bowyer and Kurt Busch—ran 1-2-3-4. But Bowyer had to a pit with a flat tire on Lap 382, after racing side-by-side with Ryan Newman, Harvick had his issue on pit road, and Almirola lost his winning chances when Bowyer hit the wall late in the race.

Harvick leaves Dover with a five-point lead over Kyle Busch. After the Oct. 21 race at Kansas, the Playoff field will be trimmed from 12 drivers to eight.

YOU ARE SHAKING YOUR HEAD ALMOST IN DISBELIEF. YOU TOLD YOUR GUYS, THANKS FOR NOT GIVING UP ALL DAY LONG. HOW MUCH OF THIS WIN IS ABOUT PERSEVERANCE?

“Oh, a lot! We had a (speeding) penalty there, early, and fell behind. Luckily, I had a good enough car and a good strategy to get back. Man, what a day. Just thanks to those guys, man. And that man right there in that white shirt (Rick Hendrick). He has done so much for me. I wish my mom and dad were here, but man; it’s been a hell of a day."

HOW ABOUT THE REDEMPTION HERE IN DOVER? LAST YEAR YOU THOUGHT YOU HAD THIS RACE WON WITH A COUPLE OF LAPS TO GO

“It definitely makes it sweeter, for sure. You don’t appreciate it in those moments. But, to come back here and have the day we had, and to move on to the next round; I don’t have to worry about Talladega next week. Man it’s a great day. Thank you."

WHERE DID ALL THAT SPEED COME FROM?

“Just perseverance and good adjustments throughout the day. It was just a great effort. I appreciate everybody and all my partners, NAPA, Valvoline, Hooters, SunEnergy1, Chevrolet, Mountain Dew, and Kelley Blue Book. It’s been an up-and-down year, I feel like. To have this race slip away last year makes the day that much more sweet."

THE CALL WAS TO LEAVE YOU OUT ON OLD TIRES. WHAT DID YOU THINK OF THAT?

“I just feel like I’ve messed it up so many times. I was like hey, here’s your opportunity to make it right and to do it right. I don’t know. Today just felt different. Like in those positions, I just felt more confident and just excited about the opportunity instead of unsure of what was going to happen. It’s just amazing and I just love the opportunity that Mr. Hendrick has given me. I’m glad he was able to be here today for our second win of the year."