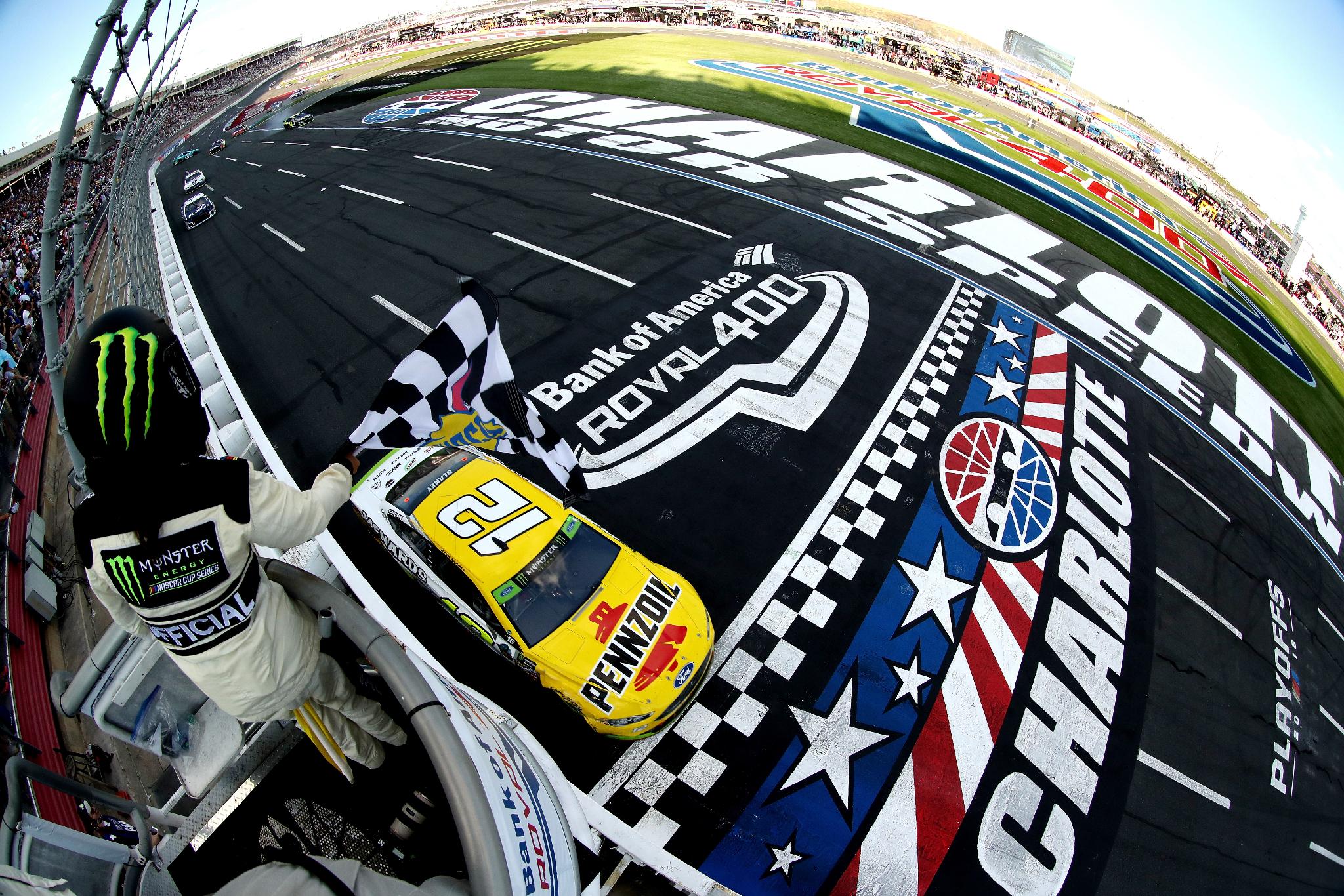 Ryan Blaney punched his ticket to the next round of the Monster Energy NASCAR Cup Series playoffs in a thrilling finish in the inaugural race on Charlotte Motor Speedway's new road course.

Blaney was in perfect position to steal the victory after Jimmie Johnson and Martin Truex, Jr. spun in the final chicane while battling for the lead coming to the checkered flag in the Bank of America ROVAL 400.

Johnson's desperation move to try and break his 51-race winless drought ultimately cost him a shot of advancing to the next round, while the battle for the final transfer spot literally came down to a single position on the track.

In a race where no one knew what to expect, it was certainly not the finish anyone imagined, but it was a finish that everyone had hoped for.

"It's cool to win the first one. Your name will be on it for a while, so that is special," said Blaney. "It's just a really cool day, a kind of unexpected ending to the day and it left us happy, so I'm sure there will be times when the tables are turned on me and I'm leading and me and second wreck each other and third wins because it all comes full circle in this deal, but it happened to work out for us today."

Blaney's victory was his first of the season and the second of his career, and it couldn't have come at a better time as he entered the race just four points above the cutoff, and now joins his Team Penske teammates Brad Keselowski and Joey Logano into the next round of the playoffs.

"Tough weekend, just kind of avoided some stuff," said Blaney. "You hate to see two guys get into it there and take out two of the best cars all day. But that's racing sometimes. We were just at the right spot at the right time. It's cool to be in Victory Lane and move on to the next round."

Sunday's wild finished capped one of the season's most anticipated events and the one that concerned drivers and team the most, considering the fact this event was also the cutoff race for the opening round of the playoffs.

The unique road course/oval layout proved to be difficult to find a perfect setup for, and NASCAR continued to make tweaks to the layout right up until race day.

From the start of the race, though, it seemed the field had figured out how to tame the ROVAL, as the opening laps went by caution free until lap 15, when Stanton Barrett became the first driver to bury his car into the tire barrier.

Up front, Kyle Larson proved to be the driver to beat, taking the lead from polesitter Kurt Busch on lap six and leading the rest of the way to win the first stage.

[adinserter name="GOOGLE AD"] Blaney, who came into Sunday's race needing to finish with 51 points or better to clinch a spot in the next round, took the lead for the first time on lap 37 after staying out on the track following a round of pit stops and parlayed that into a stage win – taking the green-white checkered to end the second stage.

Blaney was just one of seven drivers fighting for to stay alive in the NASCAR playoffs, with drivers like Alex Bowman and Austin Dillon just holding on and Johnson, Clint Bowyer and Erik Jones on the outside looking in.

Blaney, sitting uneasily 12th in points, just need to keep his nose clean, while Johnson needed nothing less than a win in order to advance.

The drivers racing for the final playoff spot got a little breathing room when Dillon fell out after hitting the wall on lap 64 and Almirola got spun on lap 70, putting his position in jeopardy.

Coming down to 10 laps to go, the drivers on the bubble included Blaney, Bowyer and Bowman going back and forth – one driver would be in the top 12 one lap, then bumped out the next.

With the final laps boiling down to a possible fuel mileage race, the ROVAL bit back.

Following a restart on with five laps to go, race leader Brad Keselowski overshot the turn going into turn one and slammed into the tire barrier, collecting Kyle Busch, Kyle Larson, Paul Menard and Bubba Wallace, while Blaney and Almirola were caught up as well.

The wreck put Larson in danger of falling out of the top 12 in points, and despite catastrophic damage to his No. 42 Chevrolet, he elected to stay out after NASCAR threw the red flag.

Truex inherited the lead while Johnson took over the second spot as the field lined up for a restart with three laps to go. A second-place finish likely would have locked Johnson into the next round, but Johnson wasn't going to be content with finishing second.

After taking the white flag, Johnson cut the gap on Truex's lead and looked to try and make a move on the backstretch but couldn't make the pass.

Coming into the final chicane, Johnson overcooked the turn, locked up the brakes and spun, collecting Truex in the process.

Blaney, running nearly a quarter lap behind, navigated between Truex and Johnson and held off McMurray to the line while Johnson recovered to finish eighth.

Larson, meanwhile, nursed his battered Camaro through the last lap, and managed to pick up a single position in the final turn when Jeffrey Earnhardt got spun out, putting him in a three-way tie with Almirola and Johnson for the final cutoff spot.

The tie-breakers when to Larson and Almirola, knocking Johnson out of the playoffs – along with Jones, Dillon and Denny Hamlin.

"He wasn't ever gonna make the corner, whether I was there or not," said Truex, who was credited with a 14th-place finish. "Just desperation on his part. Pretty stupid, really, if you think about it, because he was locked in to the next round, and now he's out. So I guess if there's a silver lining, that's it."

"(I) took myself out of a shot at the championship and obviously affected their day which I feel bad about," said Johnson. "I wish I wouldn't have been so focused on a race win and I could have transferred and kept my championship hopes alive, but we had such a good car and just one of those split-second decisions to race for the win instead of for the points and it bit me."

"Ultimately, we were in a transfer position and didn't get it. I was just going for the win. Wins are so important. And the veteran could have taken a safe route and didn't, and unfortunately took us out of the Playoffs and took out the No. 78 (Truex, Jr.)"