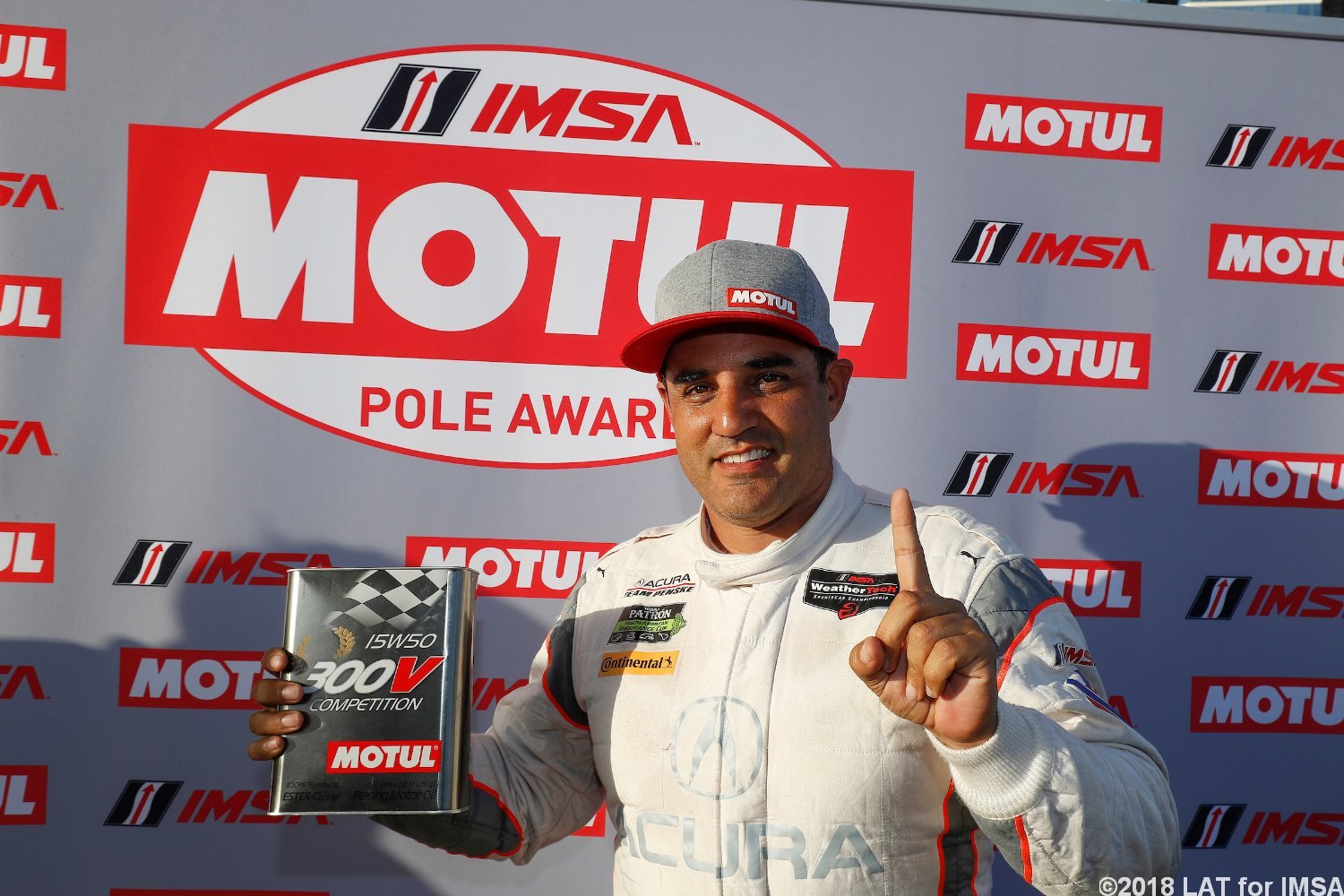 Driving the #6 Acura ARX-05 prototype he will share with co-driver Dane Cameron, Montoya was the quickest of four drivers who bettered the existing Long Beach lap record during today’s brief, 15-minute qualifying session. His best lap of 1:12.922 shattered the old mark, set just last year, of 1:13.549.

Montoya’s run is the first pole, in just the third event, for the new Acura ARX-05 prototype, and the first for Acura Team Penske in the organization’s return to sports car racing in 2018. Driving the #7 ARX-05, Helio Castroneves also bettered the existing track record, and will start his Acura from fourth, sharing the driving duties with Ricky Taylor.

Montoya was one of four drivers to better the previous Long Beach track record with a lap of 1 minute, 12.922 seconds (97.155 mph) in the No. 6 Acura DPi he co-drives with sports car veteran Dane Cameron. Ricky Taylor previously held the record, lapping the 1.968-mile street circuit in 1:13.549 in 2017 while driving the No. 10 Konica Minolta Cadillac DPi-V.R. for Wayne Taylor Racing.

“Acura and Team Penske have done such a good job on the car this weekend," said Montoya, who also scored his first career pole at Long Beach in any series. “It’s reminds me of driving a Formula 1 car, you can hustle it around and you still have to manage it. I’m really looking forward to the race tomorrow, it should be a lot of fun."

It was Hand’s second sports car pole at Long Beach, but his first in seven years. He started from the American Le Mans Series GT class pole in 2011 for BMW Team RLL, a race he went on to win alongside his current No. 66 co-driver Dirk Mueller. Overall, it was Hand’s 12th career IMSA pole position (five WeatherTech Championship, six ALMS and one GRAND-AM pole).

“We made some last minute changes before qualifying," Hand said. “We just kept tuning and tuning. Man, I work with the best team, Ford Chip Ganassi Racing. It took until the last lap. I didn’t get a good one until then, with low fuel. I knew it was the time to do it.

“I’m so happy. I love being at Long Beach. I love being on pole. My wife is here and so is my family. Look, there’s boats right there! How great is that?"

Starting second in GTLM will be Laurens Vanthoor, who looked like he’d be the class polesitter for much of the session. Vanthoor’s best lap was 1:17.013 (91.994 mph) in the No. 912 Porsche GT Team Porsche 911 RSR that he co-drives with Earl Bamber.

Starting third will be Patrick Pilet in the No. 911 Porsche, who turned in a best qualifying lap of 1:17.263 (91.697 mph). Pilet and co-driver Nick Tandy are looking for their second Long Beach GTLM victory in three years after winning the 2016 rendition of the BUBBA burger Sports Car Grand Prix at Long Beach.

Jan Magnussen, a three-time Long Beach pole winner, will start fourth in the No. 3 Corvette Racing Chevrolet Corvette C7.R he shares with Antonio Garcia. Magnussen turned in a best lap of 1:17.293 (91.661 mph).

Magnussen’s teammate, Oliver Gavin, rounded out the top five in GTLM with a best lap of 1:17.533 (91.377 mph) in the No. 4 Corvette C7.R. Gavin and his co-driver, Tommy Milner, are going for their second consecutive Long Beach victory in Saturday’s 100-minute race.

Juan Pablo Montoya (driver, #6 Acura Team Penske ARX-05) pole qualifier, first pole for new Acura ARX-05 prototype: “It’s nice to finally get a pole for Acura. Going into qualifying, we felt we had two really strong cars, and we were able to deliver the results. I just really love this Acura, it really reminds me of a Formula One car. It’s so well balanced, and so nice to drive. It’s one of those cars where you can push it more and more, and the car just takes it. You could see it today in qualifying. I put in one really good lap, and three laps later I was going even quicker!"