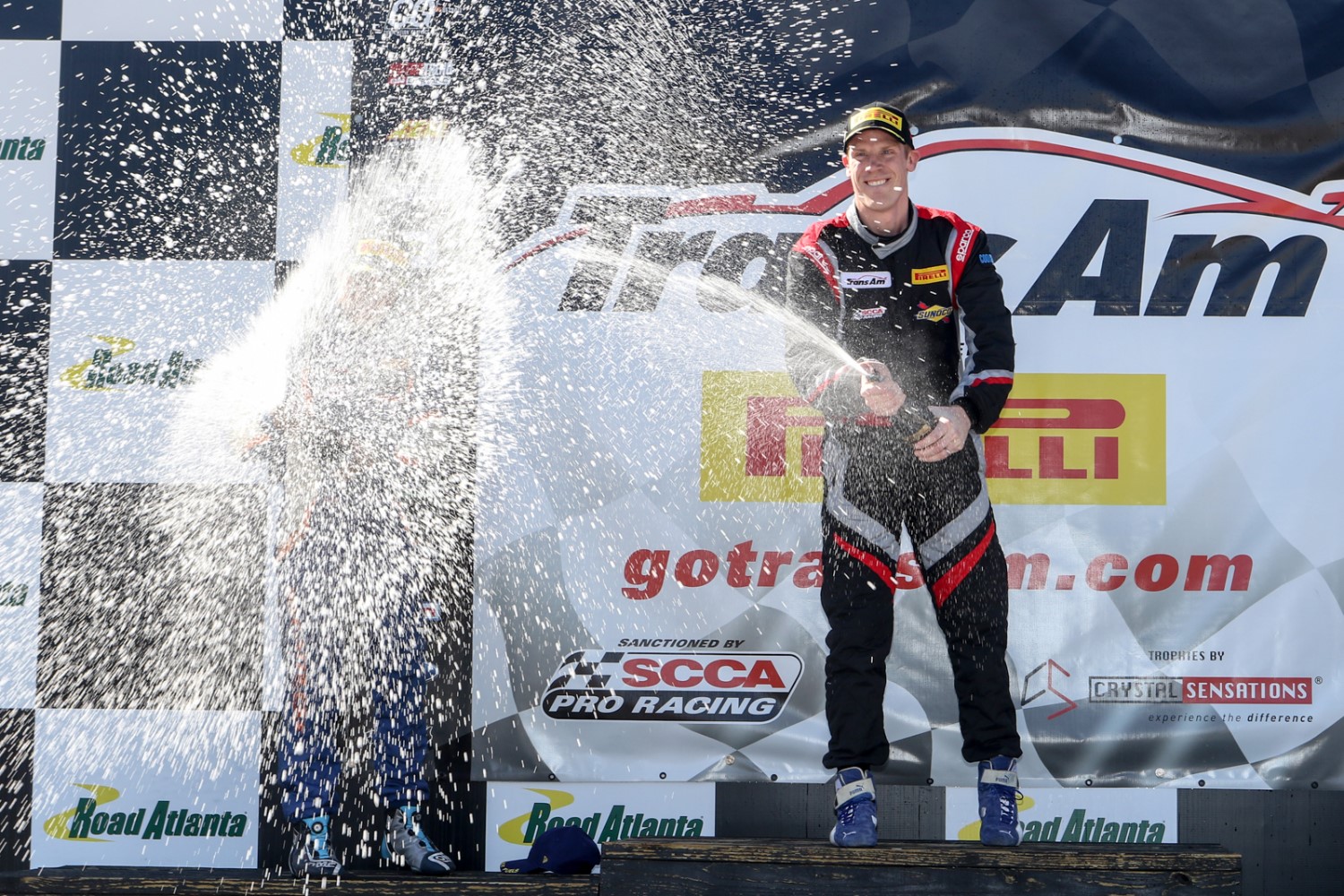 Road racing veteran Chris Dyson secured his first career Trans Am Series presented by Pirelli victory in the TA class today at Road Atlanta. Dyson was joined in the celebrations by Randy Kinsland, who secured his second consecutive TA3 class Road Atlanta win following the conclusion of the multi-class competition.

Dyson began the race in second position in the No. 20 Plaid/ CD Racing Ford Mustang but overtook pole sitter Ernie Francis, Jr., defending TA class champion and driver of the No. 98 Frameless Shower Doors Ford Mustang, before turn one of the 40-lap, 101.6-mile race around the 2.54-mile Road Atlanta circuit.

While Dyson continued in the lead, Francis would fall back to fourth by lap three, with David Pintaric, in the No. 57 Kryderacing Cadillac CTS-V, and Simon Gregg, in the No. 59 Derhaag Motorsports Chevrolet Corvette, in pursuit. Over the passing laps Francis climbed, taking third position on lap 15 and second on lap 21, then settling into close pursuit of Dyson.

[adinserter name="GOOGLE AD"]Contact between Francis and Dyson on the 37th lap saw both cars spin and Francis take the lead; however, stewards ruled the contact avoidable on the part of Francis and ordered the position be given back to Dyson with two laps remaining. Francis would yield to Dyson with the later retaking the lead. The No. 20 and No. 98 would run nose-to-tail for the remainder of the race, with Dyson holding off Francis for the win.

The win is the first for Dyson and the recently formed CD Racing team, announced only 30 days ago after a busy week of testing before Sebring.

“From where we started a month ago, I’m thrilled to be here," said Dyson. “I’m thrilled to be in the Series it has a tremendous heritage and I’m honored to come here to one of my favorite tracks– Road Atlanta. For us to win our second time out really puts us in good shape in the points battle; we went head-to-head, straight up, with Francis, Jr., who’s the benchmark. We were fortunate to come out on top–I know we’re going to have hard fights all year, and I’m really looking forward it."

While Dyson did not campaign for the stewards’ decision, he was pleased with the outcome and anticipates clean, hard racing between himself and Francis for the remainder of the year.

“It was a judgment call from the stewards," said Dyson. “I wasn’t on the radio complaining about it; frankly, I let them make those calls. Ernie and I are going to race hard all year, and I’m sure there are going to be moments like that– you just hope they don’t affect race outcomes. But this is racing and sometimes the stewards have to sort things out and that’s what they did today. It was a good hard fight, and I’m sure we can run hard and clean for the rest of the year. This is our first race with Plaid on the car and to win here near their headquarters with a lot of guests here, it’s a pretty special moment for us."

Francis would finish second, his sixth consecutive podium finish. Simon Gregg would complete the TA podium in third, his first podium appearance since Round 11 of the 2017 season. Tim Rubright, in the No. 77 BlueKnobAuto.com Ford Mustang, finished a TA class career best fourth, while David Pintaric completed the TA class top five.

In the TA3 class, Randy Kinsland secured his third career Trans Am win after a streak of mechanical frustrations that ended his 2017 championship pursuit and saw his past two appearances in the No. 11 RF Engines Chevrolet Corvette cut short.

Kinsland began the race on pole but was overtaken by 2017 champion and Sebring victor Mark Boden, in the No. 46 Fall-Line Porsche 991 GT3, on the start, eventually falling back to third position a lap later after been passed by Tim Kezman, in the No. 44 Fall-Line Porsche 991 GT3. Kinsland would take second back from Kezman a lap later, settling into the pursuit of Boden– eventually taking the lead on the 23rd lap, one he’d hold until the checkered flag.

“Wow, we’ve worked and worked on this car," said Kinsland. “We’re a small operation, a two-man crew–including me. We’ve been trying to get this car back on top and apparently it’s there. It’s really sweet to finally get back on the top step and see all of that hard work pay off.

Tim Kezman would complete the TA3 podium with Tom Herb, in the No. 16 Fall-Line Porsche 991 GT3, and Milton Grant, in the No. 55 Sentry Self Storage Porsche 991.1, completing the class’ top five.

For his pass to the lead and return to the podium Randy Kinsland was awarded the CoolShirt Systems Cool Move of the Race. The fast lap of the TA class was set by Lawrence Loshak, in the No. 2 Pennzoil/ ETE Chevrolet Camaro, a 1:23.235, while Mark Boden set the fast lap for TA3, a 1:27.460.

Earlier in the day, the TA2 class held a 101.6-mile, 40-lap contest of their own, the Trans Am Muscle Car Challenge powered by AEM, with Rafa Matos emerging victorious.

The Trans Am Series presented by Pirelli will return to action at the South Florida Sportscar Challenge, Round 3 at Homestead-Miami April 13-15.