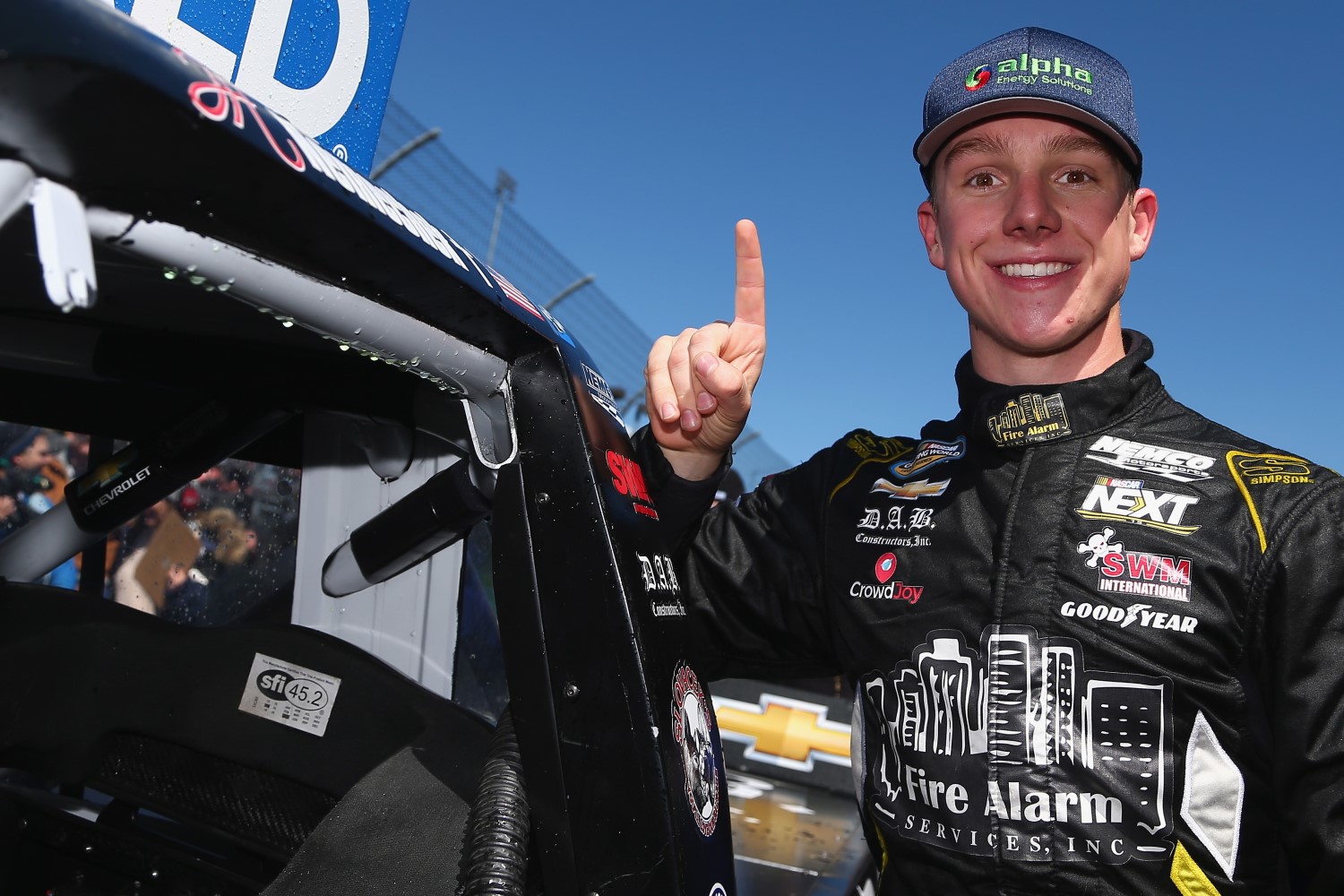 It took almost 48 hours to complete the NASCAR Camping World Truck Series race at Martinsville Speedway, but the wait only made the grandfather clock that much sweeter for John Hunter Nemechek

The Alpha Energy 250 started under threatening skies, with teams knowing it could be a race to the end of the second stage to make an official race. That didn’t happen, though, as weather came in quickly.

The first caution of the day was not for the rain and snow, but for a spinning Mike Senica. Senica had been black-flagged by NASCAR for not meeting minimum speed and ignored the directive. NASCAR stopped scoring him and then parked him for the rest of the race for his actions.

While the field was under caution, though, the rain and snow began to fall in earnest, forcing NASCAR to throw the red flag. Without a break in the forecast, the sanctioning body quickly made the decision to postpone the rest of the event, first to Sunday night and then to Monday morning when the snow created messy parking areas and diverted safely personnel to local residents.

When the action finally resumed, polesitter Ben Rhodes was still on point, with veteran teammate Matt Crafton on his outside. Crafton got the jump on the green flag, diving past Rhodes. The move may have been one we’ve seen often at Martinsville between teammates, where the leader on the inside will allow the teammate on his outside to get by so that the truck on the outside isn’t at a disadvantage. Rhodes retook the lead to win the first stage and the point that go with it.

Stewart Friesen looked to grab an advantage out of the pits with a two-tire stop, while Rhodes was frustrated with Cody Coughlin for blocking his pit box. Coughlin was penalized for pitting outside his box.

[adinserter name="GOOGLE AD"]On the restart Friesen had the preferred inside groove, but spun his tires allowing Rhodes to challenge on the outside. Friesen slipped a bit and let the field challenge his No. 52 truck, then spun off the nose of Johnny Sauter, who was pushed deep into Turn 1 by Todd Gilliland. Harrison Burton, Dawson Cram, Coughlin and Austin Hill also sustained damage in the resulting chain reaction.

Friesen’s troubles weren’t quite over as he received a two-lap penalty for too many over the wall trying to repair his damaged truck.

Rhodes led the field to green, but was challenged by Todd Gilliland, who hung with Rhodes on the outside for several laps before settling in in second. Gilliland started at the back of the field after an engine change, but his charge to the front showcased his skill and the strength of his Kyle Busch Motorsports truck. Crafton and Sauter battled in the top five with John Hunter Nemechek.

Tyler Matthews spun to bring out the third caution of the day as the stage neared its final 20 laps remaining in the stage. Matthews moved to block Stewart Friesen, who dove low and bounced off the inside curb and into Matthews’ truck, which dug the splitter into snow and mud but was able to drive away.

A few drivers opted to pit and play a bit of strategy, including Grant Enfinger and Kyle Benjamin from the top 10, which put them inside the fuel window to the end of the day and in position to lead the race after the rest of the field pitted at the conclusion of the stage.

Benjamin and Enfinger came out with the top spots for the restart, while Rhodes had a slow stop and restarted 15th, but the green flag wasn’t out for long before Matthews and Justin Fontaine went around to bring out the yellow flag at lap 159. Both the Nos. 45 and 99 had significant damage after the incident.

Benjamin settled into the lead on the restart, with Enfinger and Gilliland challenging and Brett Moffitt lurking in fourth.

Benjamin opened up over two seconds’ lead as the laps ticked down. Enfinger, on older tires, began to fade as Gilliland and Nemechek passed him with more than 50 laps still to run. Gilliland had the fastest truck, though, and cut Benjamin’s lead in half in 20 laps.

The caution erased the rest of Benjamin’s cushion with 38 to go for debris on the backstretch. A handful of drivers elected to pit for tires in anticipation of a stretch run, starting with fifth-place Moffitt, while the leaders stayed on track. The formerly dominant Rhodes had more trouble in the pits, erasing his chances to sweep the day.

Nemechek took the leaders three-wide on the restart and made it stick, taking the lead from Benjamin, who made contact with Gilliland and caused enough damage to take Gilliland out of contention for the win.

But before Nemechek could stretch his advantage, the caution flew with 26 laps remaining as Sauter’s truck lost power directly in front of Crafton, and Crafton couldn’t avoid the No. 21.

The green flag flew for Nemechek with 12 to go, with Atlanta winner Moffitt hot on his heels in third with fresh Goodyears.

Nemechek was able to hold off Benjamin and Moffitt, but the race didn’t make a full lap under green before the caution flew for the spinning No. 20 of Reid Wilson, leaving Nemechek needing to do it all over again for the win.

The restart came with just seven laps to go. Benjamin got a solid restart but was no match for Nemechek as the field jammed up behind them battling for position. Everyone made it through, and Nemechek held off a charging Benjamin to take the checkers, keeping just enough of a gap that Benjamin couldn’t get to his rear bumper to make a move. He got there coming to the checkers, but time ran out and Nemechek took the win. Benjamin finished second, Moffitt third, while Enfinger and Noah Gragson rounded out the top 5. The rest of the top 10 consisted of Matt Snyder, Timothy Peters, Harrison Burton, Austin Hill and Justin Haley.

Nemechek’s win is the sixth of his career. He is not racing for a CWTS title this season, so the win doesn’t have playoff implications.

“We had a little bit of miscommunication on that last pit stop when everyone came in and got tires," said Nemechek after the race. “Gere (Kennon, crew chief) came on the radio and said ‘pit,’ but I didn’t hear exactly what he said because of static, and I had to stay out there. I didn’t know if we were going to be able to do it, but my guys brought me a great Fleetwing / JB Services Chevrolet Silverado this weekend. I can’t thank everyone enough—Dad and everyone who outs their heart and soul into this deal. There are only four guys at our shop this year, so it’s really cool to be able to come back over here to the Truck Series…congrats to all these guys; these guys deserve it. We’ve finished second here multiple times. Tick-tock, we finally got a clock."

Despite the late-race hiccup, Sauter leaves Martinsville with a 29-point lead over Enfinger and already in the series playoffs with a win. Moffit sits third, with a win that locks him into the playoffs as well. Rhodes and Gragson finish off the top 5, with 35points separating Gragson from Sauter.