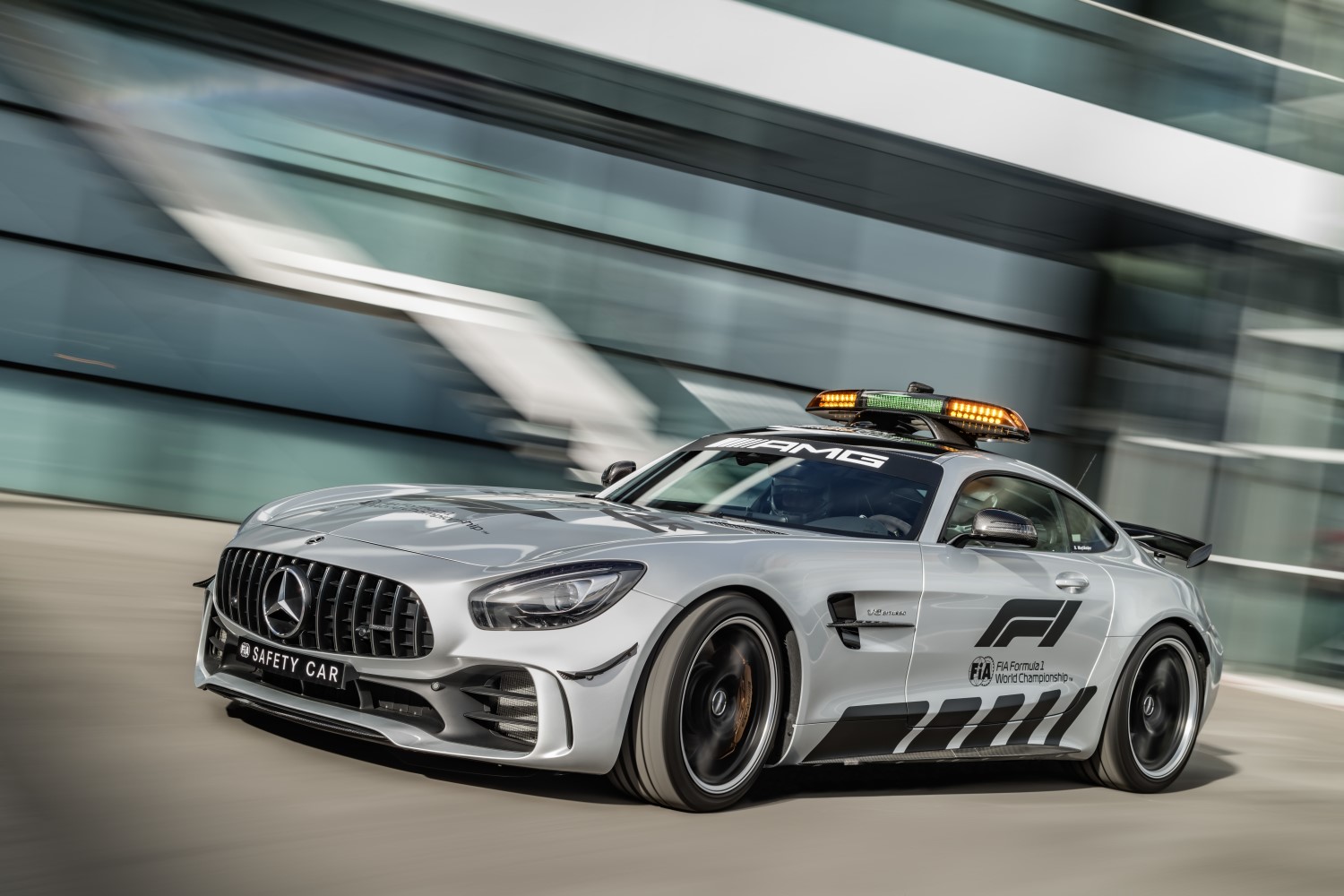 Mercedes-AMG will use the most powerful Official FIA F1 Safety Car of all time in the 2018 Formula 1 season: the 430 kW (585 hp) AMG GT R will have its debut as the Official FIA F1 Safety Car of the FIA Formula 1 World Championship at the Grand Prix in Melbourne, Australia from 25 to 27 March 2018. The top-of-the-line model of the AMG GT series will ensure maximum safety for the Formula 1 field on all 20 race weekends. The performance and sports car brand from Affalterbach has supplied the pace car in the premier racing series of international motorsports since 1996.

With an output of 430 kW (585 hp) and a top speed of 318 km/h, the AMG GT R is the most powerful and fastest Official FIA F1 Safety Car of all time: In this, the 23rd consecutive year, Mercedes-AMG will safely lead the Formula 1 field around the track when bad weather or accidents require its deployment. The AMG GT R is the ideal Official FIA F1 Safety Car, with the driving dynamics of the AMG GT3 racing car, and having spent a large part of its development time in the "Green Hell" of the Nurburgring.

"I am very much looking forward to my new company car. It is an absolute highlight in terms of driving dynamics and is one level higher up still than the AMG GT S of recent years. Of course, ideally the safety car should be deployed as rarely as possible – but when we have to safely bunch up the Formula 1 field and lead it around the track, we will be superbly equipped with the AMG GT R", says Bernd Maylander, who will again be the driver of the Official FIA F1 Safety Car in the new season.

Never before has Mercedes-AMG packed so much motorsport technology into a production vehicle as into the AMG GT R. The front-mid-engine concept with transaxle, the powerful 4.0-litre V8 biturbo engine, the elaborately designed chassis, the sophisticated active aerodynamics and the intelligent lightweight construction lay the foundations for an especially dynamic driving experience.

Wide front and rear wings allow an increased track width for optimum grip and even higher cornering speeds. The front apron with AIRPANEL active air control system and the active aerodynamics profile in the underbody, the large rear aerofoil and the rear apron with double diffuser increase the aerodynamic efficiency and help ensure optimum grip. The lightweight forged wheels are likewise designed for maximum driving dynamics. The same applies to the active rear-wheel steering, the nine-way adjustable traction control system and the adjustable coil-over suspension with additional electronic control.

As a result, the AMG GT R offers the optimal prerequisites for the tough job in the premier class of motorsports. The requirements profile of the FIA (Fédération Internationale de l’Automobile) for the Official FIA F1 Safety Car is demanding. It must be able to maintain a minimum speed level to prevent the tires and brakes of the Formula 1 vehicles from excessive cooling and the engines from overheating. With a top speed of 318 km/h and 3.6 seconds for the sprint from zero to 100 km/h, the AMG GT R poses no risk for this to happen.

The Mercedes-AMG GT R clearly has racetrack performance in its genes, as only a small number of modifications were required to transform it into the Official FIA F1 Safety Car of the FIA Formula 1 World Championship. The AMG Track Package with roll-over protection system and the ceramic high-performance compound braking system are on board as optional extras. The advantages of the ceramic brakes are a lower weight, a longer service life and even better fade resistance.

In terms of appearance, the Mercedes-AMG GT R Official FIA F1 Safety Car differs from the series production vehicle above all by virtue of the FIA and F1 car film and the light bar on the roof. The latter is positioned on a carbon-fiber air scoop that is designed to offer the least possible air resistance while at the same time providing for an aerodynamically optimized flow of air towards the rear aerofoil. The positioning and design of the carbon-fiber air scoop and the light bar are the result of extensive wind tunnel tests.

While Official FIA F1 Safety Car driver Bernd Maylander focuses on the track and at the same time keeps an eye on the field in the rear-view mirror, co-driver Richard Darker maintains radio contact with race control. Richard Darker monitors the Formula 1 vehicles by means of two iPads. The display of the left one shows the international TV broadcast. The right one can feature either an animated display of the current position of the vehicles or show current lap times. Data management for the visual communication solutions is handled by an InCar Hotspot with WLAN wireless network.

Charlie Whiting, FIA F1 Director, says: “When a Safety Car intervention is required during a Grand Prix it’s vitally important that we have full confidence in the car’s ability to lead the Formula 1 cars around the track safely. That means we need a car which is not only capable of dealing with the extreme demands a Grand Prix circuit puts on a vehicle travelling at high speed, but also one which is capable of setting a pace that allows the F1 drivers to keep tires and brakes working at the right kind of temperature so that they do not struggle while waiting for racing to resume. With the latest versions of the FIA F1 Medical and Safety Cars, that confidence is once again assured."

Alongside the safety car, the Mercedes-AMG C 63 S Estate is on hand to provide emergency care as the Official FIA F1 Medical Car of the FIA Formula 1 World Championship. It is crewed by up to three medics. At the wheel is racing driver Alan van der Merwe, whilst his co-driver is FIA F1 deputy medical delegate Dr Ian Roberts. The rear seats accommodate one or two assistant medics from a selected specialist hospital near the particular racetrack.

As on the Official FIA F1 Safety Car, the 4.0-litre V8 biturbo engine with an output of 375 kW (510 hp), the AMG SPEEDSHIFT MCT 9G transmission, the dynamic engine mounts and the electronically controlled limited-slip rear differential are on the same high level as the street-going version.