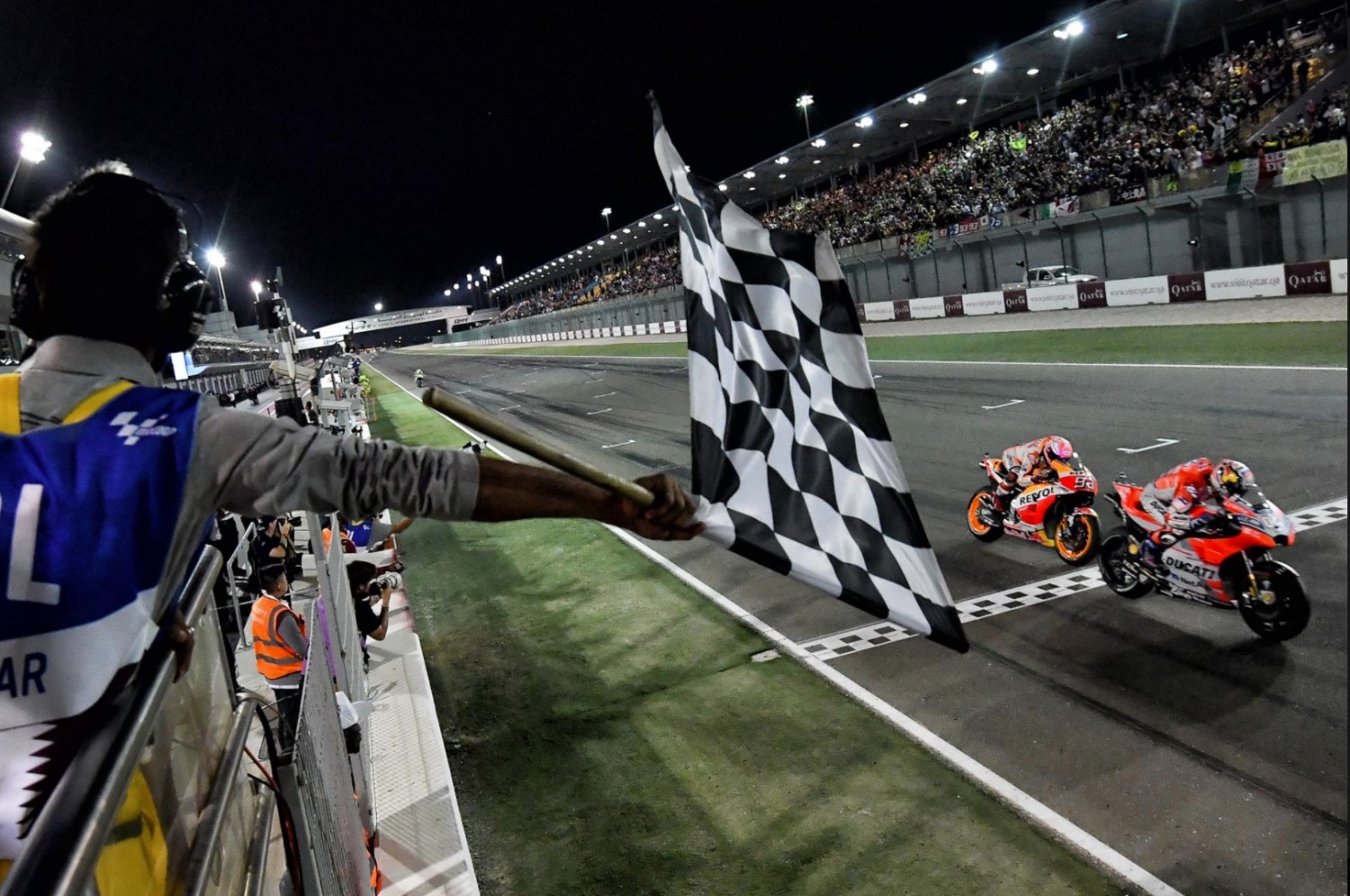 Frenchman Zarco shot off pole position to take the lead into the first corner under the floodlights of Qatar, but there was nothing to split the top ten riders in the opening laps, and it looked as if any one of them could fight for the victory throughout the 22-lap thriller. With fastest laps flying in on each lap, Zarco was still able to keep hold of the lead despite facing some tense competition.

With big battles taking place behind him, the French rider kept calm at the front whilst Rossi made his way through the field to get into podium fighting positions by the third lap, hunting down his fellow Yamaha in the lead. Marquez was never far away from the fight, sitting in the top five as soon as the lights went out. As ten laps had been completed riders were getting into a rhythm, but you could sense action was on the horizon.

Silent assassin Dovizioso moved up to third position on lap 11 as he spent the start of the race working through the field, passing his countryman Rossi who slipped back to the riders fighting for fifth. A clear battled had now developed for the podium, with Dovizioso and Marquez closing in on Zarco and they were able to make their move on the 18th lap, with Zarco losing two positions into the opening corner – as Dovizioso took the lead.

[adinserter name="GOOGLE AD"]The action was not over there, with Dovizioso and Marquez pushing themselves to the final corner of the final lap – taking no prisoners. Reigning world champion Marquez made his move through turn 15 but he was unable to make it stick, and Dovizioso led into the final corner meaning he was able to slingshot his Desmosedici over the line, 0.027s ahead.

In a similar display to the Austrian and Japanese GP’s of 2017, the duo fought to the very end, but it was Dovizioso who took the first honors of 2018, the Italian now heads to Argentina as MotoGP Championship leader.

“What a race," said Marquez!

"I’m really happy with our second place finish because this is one of the tracks on the calendar where we struggle most. After the pre-season test we knew what we could expect. With the hard front tire I was struggling a bit in the left corners but with the medium I wouldn’t have finished the race. I tried to pass Dovi in the last corner but he beat me. Honestly, I was expecting that, but I had to try the move anyway, to see if there was any way we could make it happen. In the end, Dovi had something more than me and he deserves this win.

"Even if he was a bit behind at the start, I was waiting for him–I was waiting for the red! I knew his tactic was to push at the end and when he passed Zarco I said to myself, ‘let’s go!’ I followed him and almost went wide, but it was a great race and a great show. The thing I’m most happy about is that, this time, we were able to stay with him on the straight and this is very good."

Behind the duo, Rossi fought off his rivals to secure a safe third position ahead of top independent rider Cal Crutchlow (LCR Honda CASTROL), whilst Danilo Petrucci (Alma Pramac Racing) made some strong moves on the closing laps to complete the top five.

Comeback king Maverick Vinales (Movistar Yamaha MotoGP) crossed the line in sixth, after being down in 14th on the opening lap. Making his 200th start in the premier-class, Dani Pedrosa (Repsol Honda Team) took seventh position, ahead of early race leader Johann Zarco (Monster Yamaha Tech 3), crossing the line in eighth. Andrea Iannone (Team Suzuki Ecstar) had a lonely Qatar GP in ninth position, ahead of Jack Miller (Alma Pramac Racing) who completed the top ten in his first race for his new team.

It was a bad start to the season for Alex Rins (Team Suzuki Ecstar), who crashed out of the top six fight on the 13th lap at turn two, whilst Jorge Lorenzo (Ducati Team) had a start to 2018 to forget and the Spaniard crashed out on the same lap – at turn 16. Pol Espargaro (Red Bull KTM Factory Racing) retired from the race on the 15th lap, with work to do before Argentina.

The Paddock will now pack up and head to Argentina from 6th – 8th April for the second round of what is set to be a phenomenal MotoGP season.