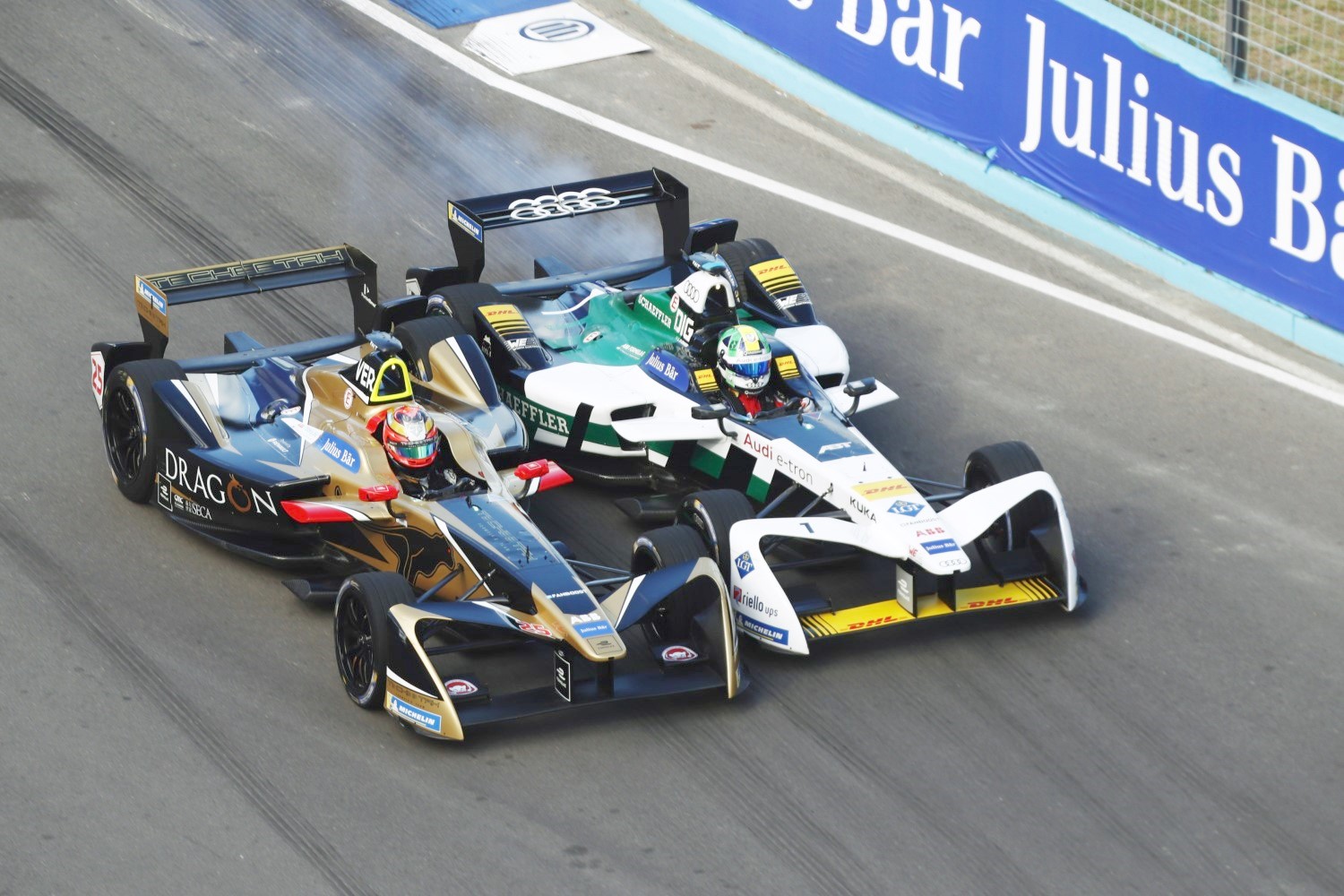 PUNTA DEL ESTE, URUGUAY – Jean-Eric Vergne extended his lead at the top of the ABB FIA Formula E Championship, narrowly edging out Lucas di Grassi in a nail-biting finish on the shores of Uruguay for the CBMM Niobium Punta del Este E-Prix.

The Frenchman stood firm with persistent pressure from reigning champion Lucas di Grassi throughout the race. Despite close competition from behind in the closing stages, Vergne kept his nerve to seal victory at the scene of his first-ever race in Formula E where he made his debut for Andretti in 2014.

It’s Vergne’s third E-Prix win and his second of the season, meaning the TECHEETAH driver now heads his nearest rival Felix Rosenqvist by 30 points at the top of the standings.

Vergne led from the front with a lightning start from Julius Baer pole position, but di Grassi didn’t let him out of his sights in a bid to win his first race of the season and re-ignite his troubled title defense.

The leading pack followed each other into the pitlane on lap 20 to make their mandatory mid-race car swap. Vergne and di Grassi were nose-to-tail as they pulled into their boxes, put they were as evenly-matched in the pitlane as they were on track – both emerging in the same order.

It wasn’t such plain sailing on the beachfront for Alex Lynn, who was leap-frogged by his team-mate Sam Bird in the pit-stop phase. Lynn had a slightly slower stop than his compatriot and ended up side-by-side in the fast lane with a hairy moment for the DS Virgin Racing team.

[adinserter name="GOOGLE AD"]Di Grassi looked to make his move on the out-lap from the pitlane on fresh tires, trying the longer route around the outside of the tricky Turn 17/18 chicane. However, Vergne defended stoutly again and squeezed the Brazilian off the racing line – nearly sending di Grassi into the barriers. Di Grassi did well to avoid contact as he looked destined to end his race in the wall.

That wasn’t enough to deter the dogged di Grassi as he reeled Vergne back in towards the closing laps of the race. Di Grassi – try as he might – couldn’t make the move stick, but left the crowds on their feet in a grandstand finish to the checkered flag.

Close in hot pursuit was Bird, making the most of the battle ahead of him. But it was too late to make any inroads with the laps counting down. It’s Bird’s first podium since the Marrakesh E-Prix in January.

In an heroic effort from the back of the field, Mitch Evans managed to pick-up yet another fourth-place finish for Panasonic Jaguar Racing. Evans was penalized in qualifying for the car not being in compliance of regimented weight distribution, meaning he was demoted to 16th-position.

Also coming through the pack was Rosenqvist in fifth place, helping reduce the damage and not allowing Vergne to disappear too far into the distance in the championship standings. Up until the race, the Mahindra outfit struggled to match the pace they’ve shown in previous events and a tricky weekend was made worse by Nick Heidfeld stopping at the end of the first lap due to a technical problem and bringing out the Qualcomm Safety Car.

Lynn – who lost time during the pits – fell back in the latter stages, but crossed the line in sixth to earn his highest finishing position of the year with a previous best of eighth in Hong Kong. Fellow Englishman Oliver Turvey couldn’t replicate his maiden podium last time out in Mexico for the NIO team and collected a handful of points a place further back in seventh.

Another storming drive to finish in the points came from Argentinean Jose Maria Lopez. The DRAGON driver sat on the penultimate row of the grid as the lights went out and fought his way through to finish in a valiant eighth position. Lopez also took the honor of setting Visa Fastest Lap and earning an extra point.

Jerome D’Ambrosio jumped up a couple of places in ninth and Maro Engel rounded-out the top-10 with the final point for Venturi. Neither Nelson Piquet Jr. or Sebastien Buemi completed the full distance, as the Swiss bowed-out early in the second stint after clipping the wall and damaging his rear suspension on his first car.

The sun may have set on proceedings in Punta del Este, but Formula E is back on April 14 for the first-ever race in the Italian capital for the CBMM Niobium Rome E-Prix – round seven of the ABB FIA Formula E Championship.

Jean-Eric Vergne, TECHEETAH, said: “I’m obviously very happy. I’m not focusing on the championship, but I’m focusing on each race. Obviously winning the race today in those conditions is to me one of the best drives. Racing against Lucas, who is the current title holder, was really tough. I don’t think I’ve won that many races but it was one of the ones I’m most happy with in terms of my driving. Today winning races proves that hard work pays off. We’re the only private team and for us to beat the other guys, we have to work twice as hard as them."

Lucas di Grassi, Audi Sport ABT Schaeffler, said: “First of all, congratulations to Jean-Eric and Sam. For Jean-Eric on the win, but for Sam to come from ninth on the grid. It was a really tough race for me, and to be honest JEV didn’t make many mistakes, I tried very hard – and I had the fastest car today. Starting second, on the dirty side, I tried very hard at the end to overtake him. I’m very satisfied with the car that I have but today we could’ve got 20 points and we only got 18. We know that in Formula E, when you get the chance you have to grab it. JEV defended very well so there was very little margin for me to attack, I think he did a small mistake coming into the last sector – we ended up touching a little bit and got super close. I tried my best, the car was super competitive – that won’t be the last time the team will fight for victories."

Sam Bird, DS Virgin Racing, said: “We were a little bit fortunate with Buemi having an issue, getting damage. I don’t know what happened to Daniel in the second stint, but that was again another position gifted to me. The pace was good today to be fair, I just wanted these two to fight a little bit more. I ran out of laps but a very strong race, it was nice to get another podium and we needed it from where we started. It was damage limitation in the championship as JEV is streaking away as he did an amazing job, and it’s great to see Lucas back on it too. One thing I would like to say is last week, Britain lost an amazing journalist – a great man who brought so much energy and fever to others. It’s not a win, it’s the best I could do, but I would like to dedicate this to Henry Hope-Frost."

– Podium presence; 11 different drivers have stood on the podium this season in only six races, highlighting once again the close competition in Formula E.

– Road range; similar to each event across the season and despite being the same specification of battery, the number of race laps has increased in Punta del Este – four more than the last event in season two and six more than the first-ever race in Uruguay.