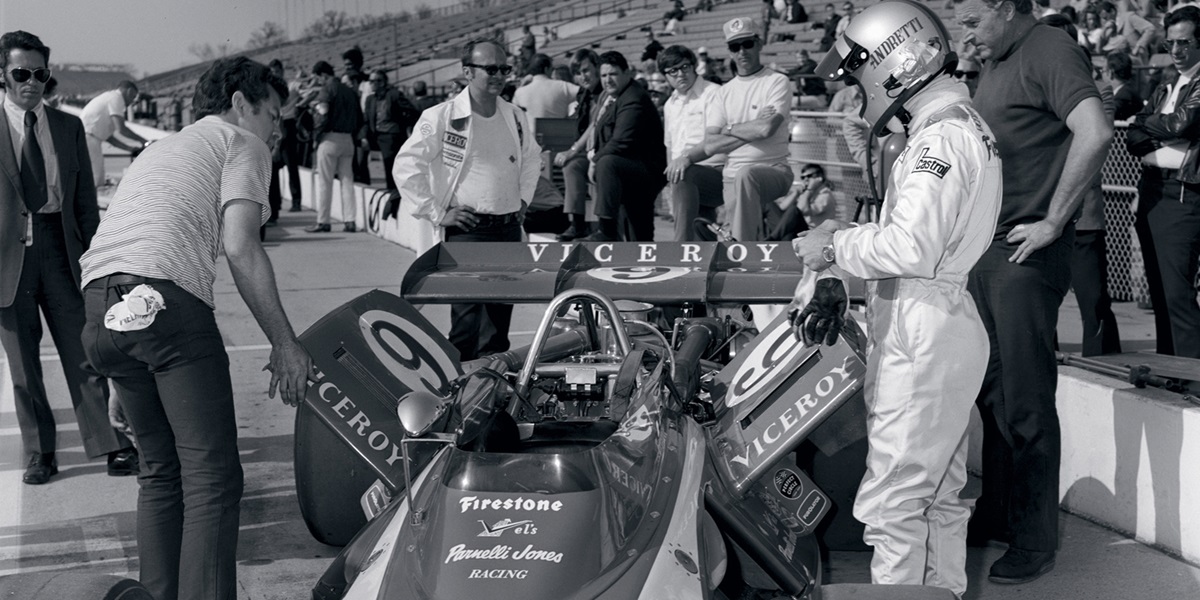 Note: This continues a series of feature stories highlighting historic milestones and anniversaries honored in 2020 leading up to the Month of May and Legends Day presented by Firestone on Saturday, May 23 at IMS.

The proving ground that is the Indianapolis Motor Speedway wrote a significant page of both INDYCAR and Indianapolis 500 history about 50 years ago with the innovation of the slick tire, thanks largely to racing legend Mario Andretti and Firestone.

As Andretti remembers, it was a Firestone tire test in December 1967 at IMS. The hallowed grounds were empty save for Andretti and Firestone engineers, some of whom were hand-cutting grooves into the tires in the garage.

Hand-cutting grooves was customary back in the day, but it took a lot of time. Indy cars used grooved tires instead of slicks back then because it was believed they offered more grip and safety. The worry with slick tires was that if there was debris or marbles on the racing surface, the tires would lose total grip, whereas grooved tires gave the driver the opportunity to recoup some of the lost grip.

As they day progressed, Andretti tested multiple different tire constructions for Firestone, all on grooved tires. As the day ended, Firestone had one more sidewall construction they wanted Andretti to test, but the engineers didn’t have time to cut grooves into the tires.

Andretti went out and turned the fastest unofficial lap ever at Indy at the time, “and that was being careful," Andretti said. When he drove into Turn 3 at full speed for the first time on the slicks, the tires gave him all the confidence he needed.

“I got immediate feedback that encouraged me to push the limit, and the car felt pretty damn stable," Andretti said. “So, you just go. You trust the seat of your pants, and there’s a certain feel that gives a driver all the confidence needed, and I loved that run."

Andretti and the Firestone team were thrilled. What an amazing sidewall construction they had come up with, they thought.

Firestone brought the same tire construction to Indianapolis the following May, except the tires were grooved. No driver in the field could duplicate the time Andretti set on the slick tires.

“The fact that, again, I set that record time and the car felt the best that it had ever felt before, somehow even in my mind it didn’t register that maybe it was the fact that we were on slicks," Andretti said. “It’s interesting that it took a while for us to realize having the slick tire had more print on the ground and that’s why you have greater grip."

After that race, the industry began to wonder if that stellar December speed Andretti put up was because of slick tires. Still, it took a few more years before the industry came around to the idea.

Still, Andretti said the progress Firestone and Indy car racing made with tires at the time was phenomenal. He argued that during a period of time, there wasn’t even a need for a new car.

“The performance of the tire was giving us enough speed to be totally satisfied," he said. “For a couple of years, we didn’t really improve the car at all, but we went faster. The tires are the most important part as far as the performance of the car any way you look at it, and that’s what meets the road."

Andretti said he is proud to be a part of the innovative history of Firestone and the Indianapolis Motor Speedway. He was always willing to be a test driver to help elevate the series, but there was also that part of him that relished the additional on-track time.

“Well, there is definitely pride in innovation, but I was personally banking so much knowledge as far as what to look forward to and how to be able to assess situations, which helped me also in setting up the race car, which benefitted me in races," he said. “I owe Firestone a great deal for the opportunity to do so much driving that helped me develop my skills and win races for them. It was a win-win situation all around. I look back to those periods with fondness and also with a great degree of appreciation."

Tickets for the entire Month of May, including the 104th Running of the Indianapolis 500 presented by Gainbridge and GMR Grand Prix, are on sale at IMS.com and the IMS Ticket Office