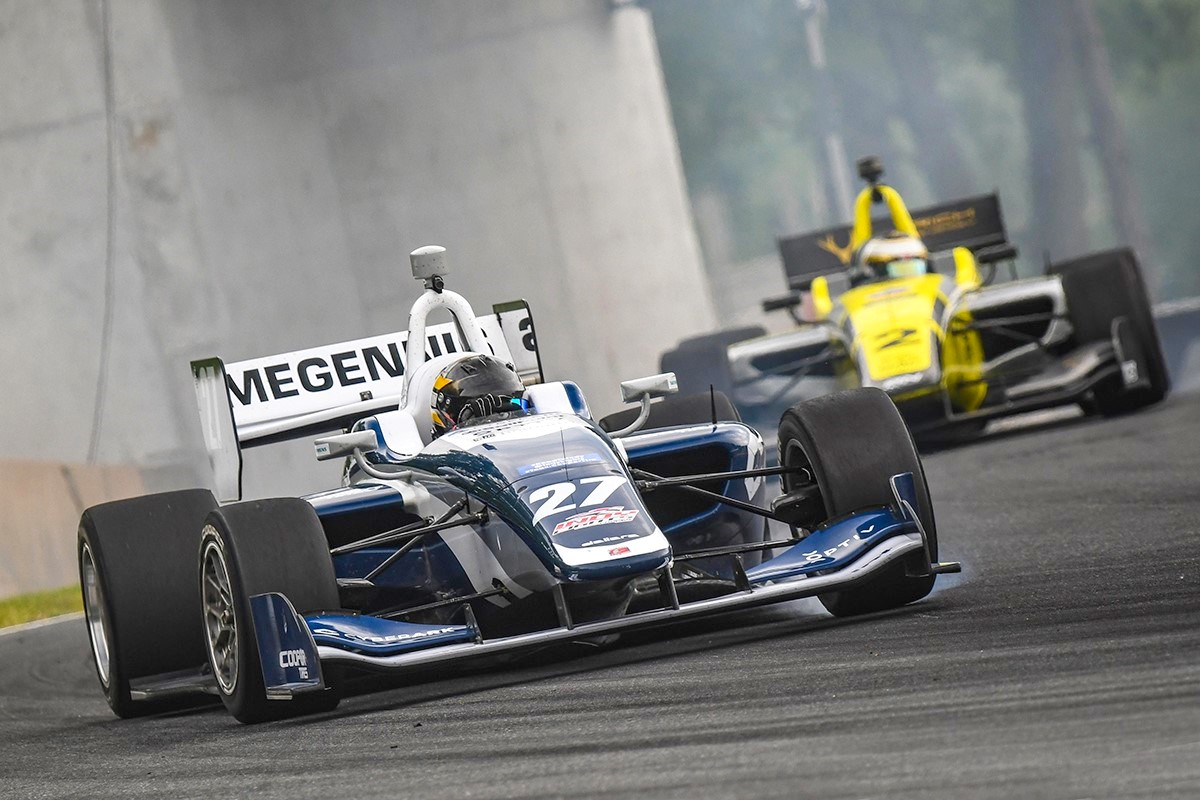 The quest for a share in over $2.7 million in scholarships and prize money that will be distributed during the 10th anniversary season of the Road to Indy Presented by Cooper Tires begins in earnest just over a week from now on the streets of St. Petersburg, Fla. Prior to that, drivers on all three levels of the world-renowned open-wheel driver development ladder will have one final opportunity to wrap up their pre-season preparations during the traditional three-day “Spring Training" outing which begins this Saturday at Homestead-Miami Speedway in Homestead, Fla.

Drivers also will benefit from a series of instructional seminars and briefings over the course of the weekend to assist in the learning process. Highlights will include media training by media veteran Barbara Burns, a roll-out of the latest Cooper Tires Hashtag program – which enters its seventh year in 2020 – and a presentation by series partner SimMetric Drivers Performance Labs, which will have a simulator on-site in the paddock.

In addition, Road to Indy TV will be recording interviews and segments to be aired during the following weekend’s extensive coverage of the opening races of the season, which will feature over 10 hours of programming. IMS Productions will also be on-site to capture pre-season interviews and footage for NBC Sports Gold.

Robert Megennis, who celebrates his 20th birthday on March 5, remains with the Indianapolis-based team after scoring one race win and two poles during his rookie campaign. He will be joined by a pair of talented rookies in Danial Nielsen Frost, 18, from Singapore, who finished a strong fifth in the 2019 Indy Pro 2000 series with a pair of victories to his name, and Kyle Kirkwood, 21, from Jupiter, Fla., who aims to become the first driver ever to win successive championships in USF2000, Indy Pro 2000 and Indy Lights.

Another main talking point this year will be the return of Santi Urrutia, who has joined HMD Motorsports in his quest for the championship and a scholarship valued at over $1 million to ensure entry into a minimum of three NTT IndyCar Series races in 2021, including the Indianapolis 500. After winning the Indy Pro 2000 title in 2015, the popular Uruguayan lost out on the 2016 Indy Lights crown by just two points to Ed Jones. He was runner-up also in 2017, to Kyle Kaiser, despite a late surge, and placed third in 2018 behind Patricio O’Ward and Colton Herta.

“I’m super happy to be back in Indy Lights," said Urrutia, who finished third in last year’s TCR Europe series, his first experience in anything other than an open-wheel car. “When I was in Europe, I missed so many things: the people, the spirit, the speed, the ovals, the fans. I’ve been working hard, because I know it will be difficult to be back in a single-seater after a season with front-wheel traction."

A pair of teenagers, David Malukas and Antonio Serravalle, will line up alongside Urrutia as the recently restructured HMD team expands to a three-car program for the first time. Malukas, from Chicago, Ill., will return for his second season of Indy Lights, seeking to build upon a pair of podium finishes in 2019, while Antonio Serravalle, from Montreal, Que., Canada, steps up from Indy Pro 2000.

Proven race-winning squad Belardi Auto Racing will enter a pair of Dallara IL-15s for second-year driver Toby Sowery, from Cambridge, England, who burst upon the scene last year by twice finishing on the podium during his St. Petersburg debut, and Swedish teenager Rasmus Lindh, who has finished second to Kirkwood in each of the past two seasons – in USF2000 following his debut Road to Indy campaign in 2017 and then last year in Indy Pro 2000.

After winning races in both USF2000 and Indy Pro 2000 in recent years, Canadian-based team Exclusive Autosport is expanding into Indy Lights for the first time with experienced Road to Indy exponent Nikita Lastochkin.

Popular Canadian Parker Thompson has just one goal for the 2020 season: to finally claim his first Road to Indy championship. Thompson, from Red Deer, Alb., who turned 22 earlier this week, has finished among the top three in the final championship standings in each of the past four years, firstly in USF2000 and then, for the past two years, in Indy Pro 2000. For 2020 he has joined Texas-based DEForce Racing, which will field additional cars for returning drivers Kory Enders, from Sugar Land, Texas, and Moises de la Vara, from Guadalajara, Mexico, and rookie Manuel Sulaiman, from Puebla, Mexico, who steps up from USF2000.

“I'm delighted to be with DEForce Racing, and back in the Indy Pro 2000 Championship for 2020," said Thompson. “The Road to Indy is close to my heart. The goal is nothing less than a championship win."

With several driver announcements coming later this week, Thompson’s mirrors will be filled with a hungry crop of returning veterans and series rookies.

Prime among them will be Braden Eves, 20, from New Albany, Ohio, who moves up one rung on the Road to Indy ladder with Exclusive Autosport after winning last year’s USF2000 title at the last gasp in a thrilling season finale.

“I have high hopes for this season," said Eves. “I feel very well prepared and had a good testing program this off-season. I think everything translates very well; the USF2000 car and the Indy Pro 2000 car are both similar. And reflecting on last year, I have infinitely more knowledge and experience, so I’m feeling much more comfortable and confident. Last year I was a little on edge from the beginning, as I didn’t feel I had a 100 percent handle on the car. This year that’s not the case and I feel I’m 100 percent ready."

RP Motorsport USA, which guided Kirkwood to a dominant championship victory in 2019, will field a pair of Tatuus PM-18s for Phillippe Denes and Lucas Petersson. Denes, from Carmel, Calif., showed well during a partial 2019 campaign, while Dubai and Miami-based rookie Petersson has amassed plenty of global experience in recent years, including the FIA F4 United Arab Emirates series, the BRDC British Formula 3 Championship and, most recently, the Toyota Racing Series in New Zealand.

Other contenders will include Artem Petrov, from Saint Petersburg, Russia, who has joined two-time defending Team Champion Juncos Racing following a partial season in 2019; Colin Kaminsky, from Homer Glen, Ill., who is stepping up from USF2000 in concert with the Pabst Racing team; Canadian Antoine Comeau, who returns with Turn 3 Motorsport; veteran Charles Finelli (FatBoy Racing!); and engineering student Sabré Cook, from Grand Junction, Colo., who will dovetail her studies this year with select races in Indy Pro 2000 and a second full campaign in the female-only W Series in Europe.

A typically strong field of drivers will chase the glory in USF2000, all with eyes set firmly on winning a scholarship valued at just over $328,000 to progress into Indy Pro 2000 for 2021. Christian Rasmussen, from Copenhagen, Denmark, will begin the year among the favorites for honors after an impressive rookie campaign which included three wins for the Jay Howard Driver Development team. Rasmussen finished third in his first season of car racing but scored more points than anyone else over the course of the second half of the season.

“I am 100 percent focused on winning the championship, and I know that the team is as well," commented 19-year-old Rasmussen. “I think we have a good shot at it and I can’t wait for the season to start."

If Rasmussen and JHDD are to achieve their goal, they will have to overcome the combined might of Cape Motorsports, which has won every one of the last nine drivers championships, and Pabst Racing, which has claimed the coveted Teams title in each of the past three years. Both have once again attracted strong lineups.

Reece Gold, 15, who is based in Miami, will continue with the Cape brothers, Dominic and Nicholas, for his second USF2000 season, alongside Michael d’Orlando, from Hartsdale, N.Y., Kyle Dupell, from Portland, Ore., and rookie Josh Green, from Mount Kisco, N.Y., who impressed in 2019 by finishing a close second in a hard-fought F1600 Championship Series and then claiming a coveted Team USA Scholarship.

Wisconsin-based Pabst Racing also has a strong lineup as it chases that elusive first drivers crown. Teenager Yuven Sundaramoorthy, from Oconomowoc, Wis., will remain with the team for his sophomore season, joined by second-generation Brazilian racer Eduardo Barrichello, whose father, Rubens, twice finished second in the Formula One World Championship, and Englishman Matt Round-Garrido, who ran partial campaigns last year in both USF2000 and Indy Pro 2000.