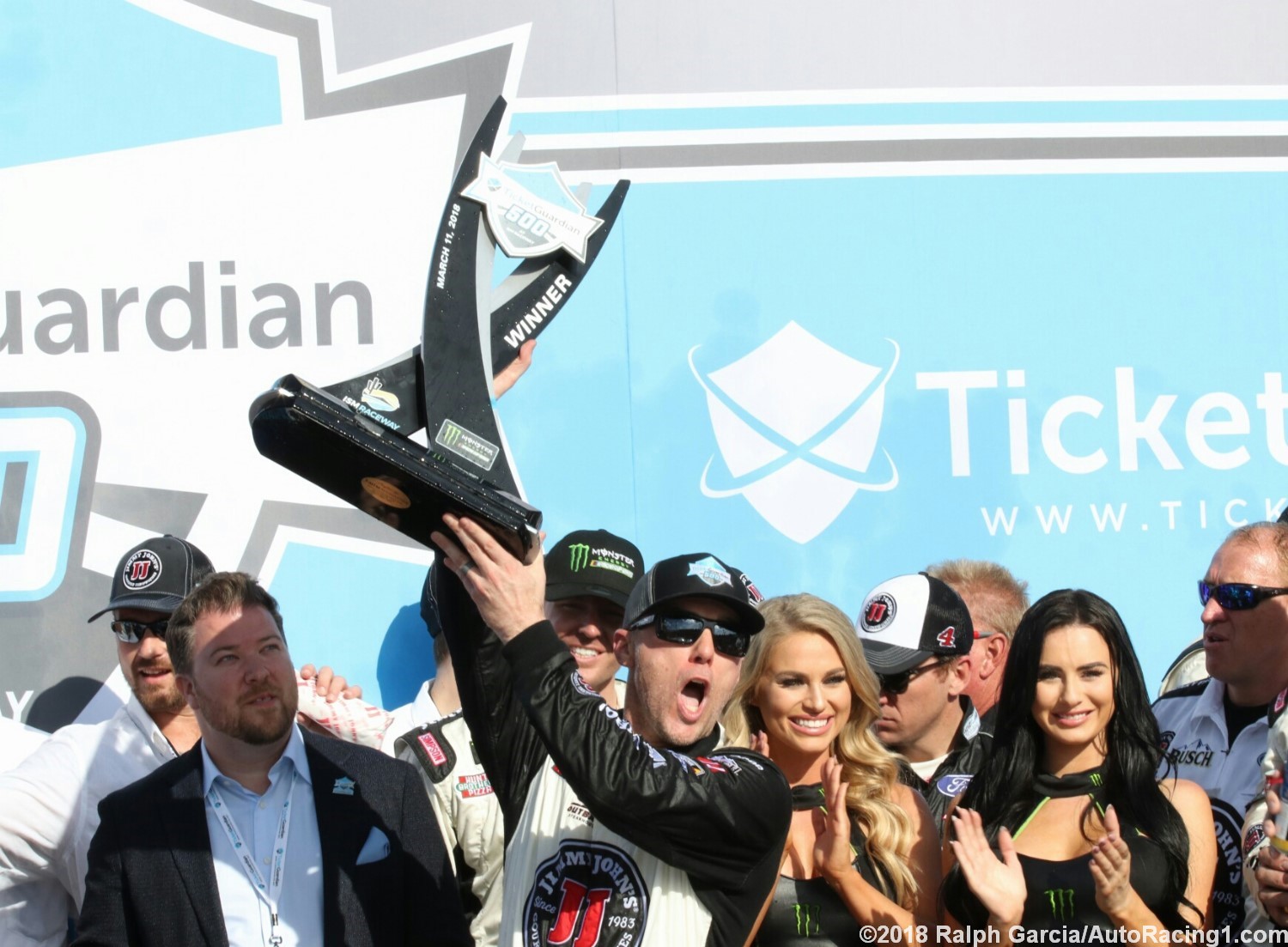 As the old aphorism goes, there's nothing certain except death and taxes.

After Sunday's TicketGuardian 500 at ISM Raceway, you can add Kevin Harvick at Phoenix to that list.

Harvick beat Kyle Busch to the finish line by .774 seconds to win his third straight Monster Energy NASCAR Cup Series of the season, the first time a driver has strung three victories together since Busch accomplished the feat at Kentucky, New Hampshire and Indianapolis.

The victory was a record ninth for Harvick at the one-mile track in the Sonoran Desert and the 40th of his career, third-most among active drivers and tied with NASCAR Hall of Famer Mark Martin for 18th on the all-time victory list.

[adinserter name="GOOGLE AD"] But the win was more than a statistical triumph for the driver of the No. 4 Stewart-Haas Racing Ford. Harvick came to Phoenix with a chip on his shoulder, stung by a midweek penalty for issues with the roof braces and right rear side skirt extension after last week's race-winning car from Las Vegas.

The infractions cost Harvick's team the benefits of the victory in Sin City and deprived him of the services of car chief Robert "Cheddar" Smith. On the flip side, it lit a fire under the whole organization.

"I've been mad as all get-out because this team does a great job," Harvick said. "This organization does a great job and we've got fast race cars. And to take that away from those guys just really pissed me off last week.

"To come here to a race track that is so good for us is a lot of fun, and everyone was just determined this week, and we just wanted to just go stomp them. We didn't stomp them, but we won. That's all that really matters. Just proud of this team. Put a fire in our belly."

As Harvick indicated, it wasn't the sort of thrashing he engineered at Atlanta and Las Vegas during the winning streak. He started 10th and didn't lead a lap until he charged past Busch through Turn 4 on Lap 179. All told, Harvick led 38 laps, a distant third behind Busch's 128 and Kyle Larson's 54.

A mistake on his final green-flag pit stop cost Busch a chance to win the race. Harvick had come to pit road on Lap 256. Four laps later Busch pitted from the lead, but the jack dropped prematurely on the left side of the No. 18 Joe Gibbs Racing Toyota, costing the 2015 series champion roughly three seconds.

Busch eventually cycled out into second place after passing third-place finisher Chase Elliott, but the pit road mistake left him too far behind Harvick. At one point in the closing laps, Busch cut Harvick's advantage to a half-second as the drivers worked traffic, but he could get no closer.

"Coming into the green flag stops, had a couple guys pit a little bit before us," Busch said. "I don't think that hurt us too bad, but the jack dropping certainly did. We lost the race on pit road today. There's been races where I've won it on pit road, too. We'll just have to go into next week and see what we can do there."

Denny Hamlin ran fourth, followed by Martin Truex Jr. and Clint Bowyer. Aric Almirola, Daniel Suarez, Erik Jones and Kurt Busch completed the top 10, as both Stewart-Haas and Joe Gibbs Racing put all four of their cars in the top 10—Stewart-Haas for the first time in the organization's history.