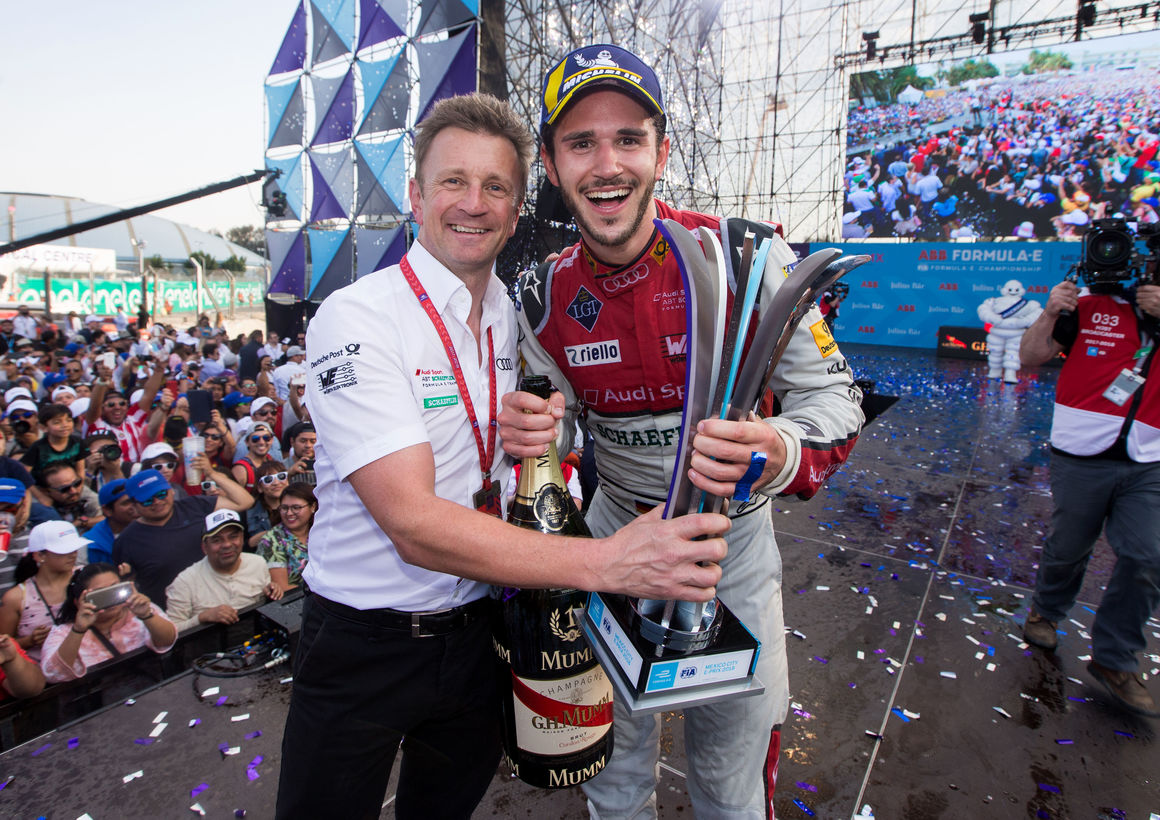 Daniel Abt clinched his maiden victory in the ABB FIA Formula E Championship in Mexico City, ending the long drought without a German E-Prix winner in the electric street racing series.

After agonizingly being stripped of a win for a post-race technical infringement in Hong Kong, Abt can now claim to be a winner in Formula E and the first from Germany in 38 races. The result in front of the fervent Mexican fans also marks the first victory for Audi as a factory team.

Abt progressed through the field during the early phase of the race from fifth on the grid and took the lead during the pit-stop window. The German inherited a place after Julius Baer pole-sitter Felix Rosenqvist ground to a halt due to a technical glitch while heading the field on lap 15.

He stuck close behind the gearbox of Sebastien Buemi, but eased his way into second spot after the Renault e.dams driver ran wide at Turn 1 shortly before the mandatory mid-race car swap.

As the cars peeled into their garages, Abt had closed the gap to Oliver Turvey and put himself in prime position to jump the NIO driver. Turvey – who looked set to win here this time last year, but retired due to a technical fault – had his eyes set on the top step again. However, Abt was strapped in quicker than his nearest rival in the pits and comfortably jumped Turvey to move into first position.

With a clear road ahead Abt looked comfortable as the chasing pack went hammer and tongs in the battle for the final podium places.

Buemi pressurized Turvey to the checkered flag but couldn’t find a way past, consolidating Turvey’s highest finishing position in Formula E and his first podium finish in second place. The 2015/16 champion continued his consistent form with a third podium in as many races – stretching back to Marrakesh.

Another driver showing similar form is Nelson Piquet Jr, coming home in what seems to be a familiar fourth place – narrowly missing out on an elusive top-three finish for his new Panasonic Jaguar Racing team. It’s the third time Piquet has crossed the line in fourth place this season.

Championship leader Jean-Eric Vergne couldn’t replicate the speed shown in Santiago and could only manage fifth. However, with Rosenqvist and Bird failing to score, Vergne has edged further ahead in the standings – 12 points clear of the Mahindra Racing driver.

Mitch Evans added to Jaguar’s points-haul in sixth, moving the outfit to third in the team standings, which is their highest position to date. Antonio Felix da Costa was a place further back despite starting from fourth on the grid, with Edoardo Mortara impressively scything his way from 18th to eighth.

Reigning champion Lucas di Grassi managed to claim his first points of the season from last on the grid. Even with the odds against him with a 10-place grid penalty for changing an inverter and a further five-second time penalty during the race, di Grassi managed a hard-fought ninth-place finish.

Fans don’t have to wait long for the next instalment of electric street racing with Formula E returning to the shores of Punta del Este in Uruguay for round six of the ABB FIA Formula E Championship on March 17.

Daniel Abt, Audi Sport ABT Schaeffler, said: “We came here knowing that we had a super-fast car and 12 points overall in the team. In Formula E, anything can happen – you have to focus on every lap. The mechanics were very, very fast today – I don't know how they were able to do that but it was key for the victory and I'm very thankful for them. We didn't give up, we kept believing in it and today was just a fantastic day. But we've seen Formula E is unpredictable – we saw that with Felix – and we just need to keep doing our best. For now, I'm just very proud of the team and it's been a great day."

Oliver Turvey, NIO Formula E Team, said: “Last year was really tough – we had pole position and then we had the issue when I was in the lead. Today, I knew that we had the pace if we had a smooth weekend to be challenging at the front. I was feeling pretty comfortable at the beginning and I was able to pull away from Sebastien. I felt confident to try and defend and I saw him coming down the inside, so I just braked as late as I could. It was a close race but I'm so pleased to get the first podium for the team."

Sebastien Buemi, Renault e.dams, said: “The first part of the race was the most difficult for me, but then in the second part of the race I was much quicker. I knew Daniel was too far ahead, so I was taking my time to try to pass Oliver and trying to wait until he was really struggling with the energy because it's really difficult to pass here. I don't consider myself in contention for the championship because I'm not quick enough, but I'm still quite happy because that's my 20th podium in Formula E and at the same time we scored points."

– Double Deutsch; Abt’s victory marks the first time a German has stood on the top step of the podium in Formula E, as well as Audi’s first win as a factory team.

– Lapping it up; this year’s Mexico City E-Prix was contested over 47 laps, which is two more than last year and four more than the inaugural event in 2016 – using the same specification of battery.