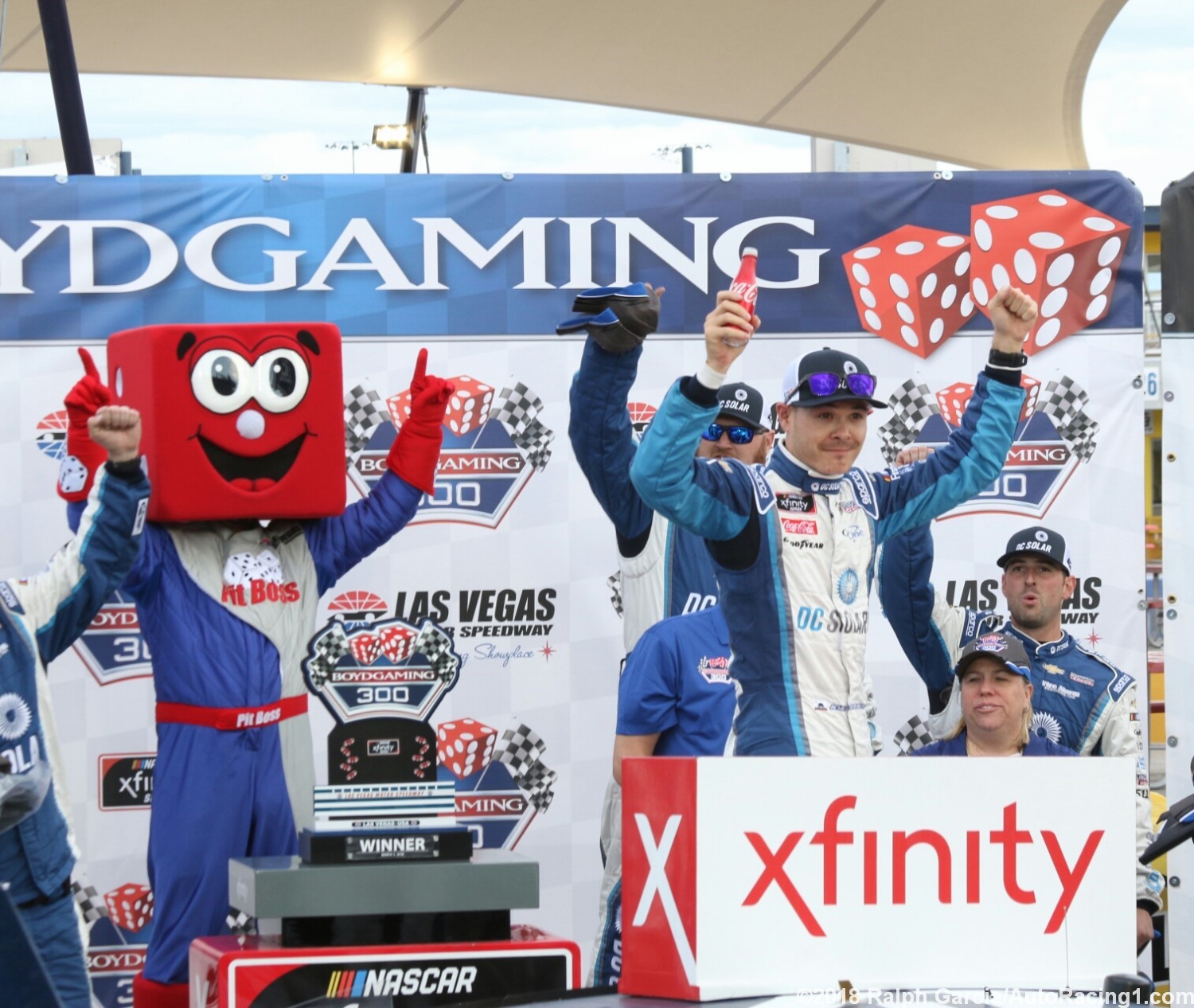 Kyle Larson pulled away from pole winner Christopher Bell after a restart with seven laps left and took the checkered flag in Saturday's Boyd Gaming 300, winning for the first time at Las Vegas Motor Speedway in the NASCAR Xfinity Series.

Larson beat Bell to the finish line by .881 seconds. The driver of the No. 42 Chip Ganassi Racing Chevrolet led 142 of the 200 laps and overcame a pit road snafu that dropped him to eighth for a restart on Lap 139 after a caution for Austin Cindric's crash in Turn 2.

The victory was Larson's first of the season and the ninth of his career.

"It was an awesome day," Larson said in Victory Lane. "This car was so fast. It was really fast last year, but you really never know, and this was my first time racing with this new (flange-fit) body, and it performed well."

Nor did it take him long to recover after the slow pit stop on Lap 135 that set him back.

"Normally my guys are some of the best on pit road," Larson said. "They said the left-rear (tire) just wouldn't come out (of the wheel well). I had been fighting a tight issue all day and then finally we got our car to turn better.

"It allowed me to get to the lead fairly easily, and then I was saving fuel in case the race stayed green."

Larson and Bell are frequent rivals in dirt-track racing, and Bell had the upper hand in last November's Turkey Night Classic and January's Chili Bowl, the marquee midget race of the season. Bell was happy to see the friendly rivalry extend to pavement.

"That was really cool, and there will be a lot more of that," promised Bell, who outdueled Larson at the end of Stage 1 but fell short after the final restart. "We were close, running second to Kyle – if I'm going to run second to anyone, I guess I would rather it be him.

"Special day, we were able to win a stage and get a Playoff point. We need to keep racking those up and get some race wins here."

But the show at the beginning and at the end was Larson vs. Bell.

"It's always fun to get to race Bell," Larson said. "He seems to beat me all the time in the dirt stuff, and he edged me out there in qualifying. We were pretty equal there… It was cool to race, though.

"That first stage kind of felt like we were dirt-track racing there, swapping lanes and stuff. I was trying to take the air off him, and he got by, and yeah, it was fun… Anytime I get to race in the Xfinity Series, I'm sure we'll be up front, battling each other."

Trying for a weekend sweep after winning Friday night's NASCAR Camping World Truck Series event, Kyle Busch fought an ill-handling Toyota throughout the race and finished 14th after his fueler drew a penalty for handling a tire during a green-flag stop on Lap 166.