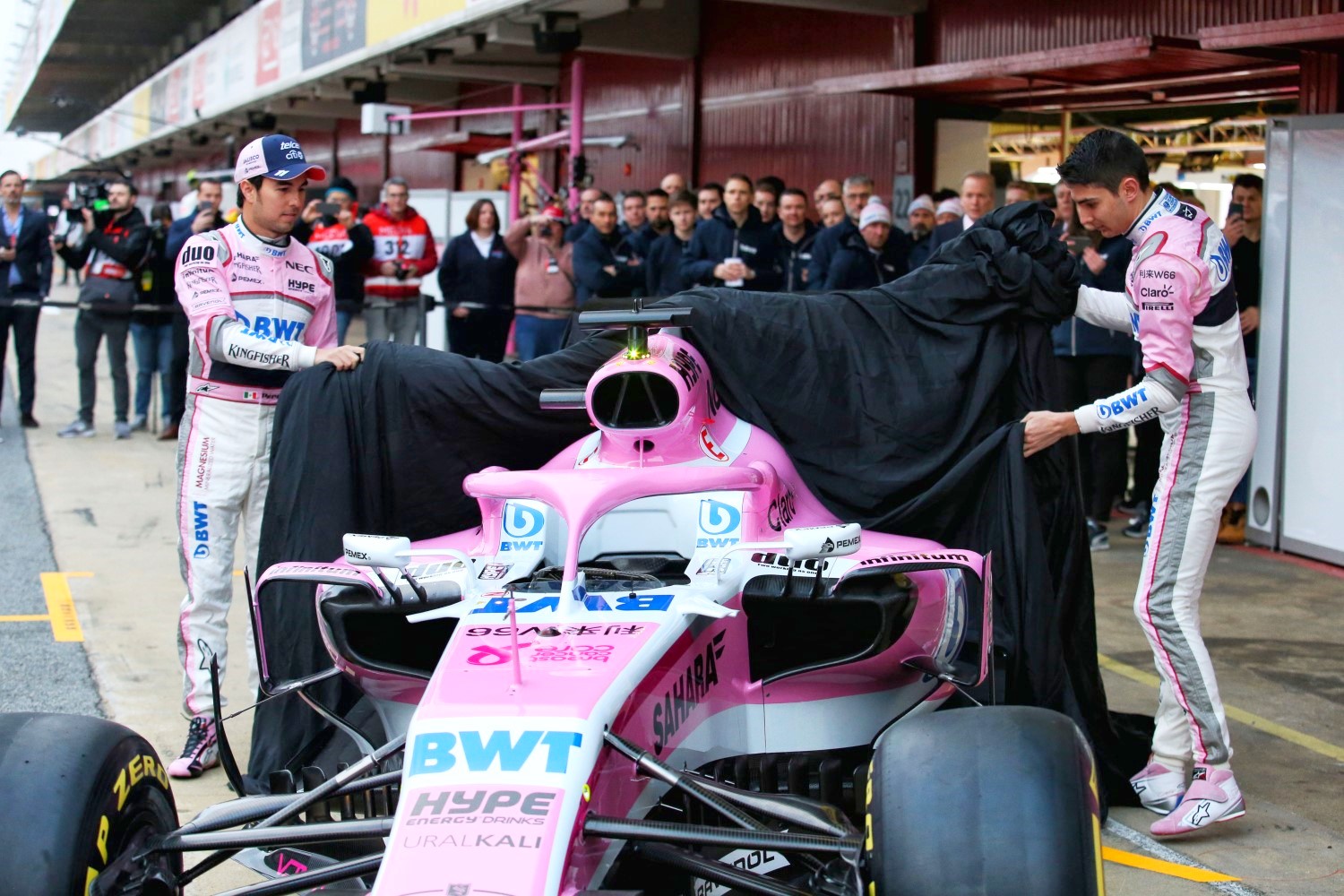 Force India unveiled its 2018 Formula 1 car an hour before the start of pre-season testing.

The new VJM11 has a pink livery for sponsor BWT – although there is now more white on the nosecone, engine cover and rear wing and around the cockpit.

Development driver Nikita Mazepin will drive Monday while regular drivers Esteban Ocon and Sergio Perez will then take turns in the car later in the week.

Reserve driver Nicholas Latifi was due to drive as well but tweeted on Monday morning that he "a serious infection put me in hospital last week and I'm now recovering at home".

[adinserter name="GOOGLE AD"]The PEMEX logos were visible on the wing mirrors of the VJM11 when Sergio Perez and Esteban Ocon pulled the covers off their 2018 car in Barcelona this morning. Branding is also present on the drivers’ suits, team clothing and other assets.

Carlos Alberto Trevino, PEMEX CEO: “We are extremely proud to announce our partnership with Sahara Force India on the eve of the new Formula One season. The team has achieved remarkable results in recent years and everyone at PEMEX is excited to support this team on the next stage of its journey. The global appeal of the sport provides an ideal stage to increase our brand awareness and to show our clients, franchisees, investors and consumers the strength and support of the brand which has entered a new open market environment. We want to begin a novel and exciting venture to show our evolution."

Vijay Mallya, Team Principal and Managing Director of Sahara Force India: “The involvement of PEMEX in Formula One is hugely significant. As one of the biggest companies in the world, it’s fitting that they have a presence on the Formula One grid through their partnership with our team. We share a similar mindset as both our organizations have big ambitions and aspire to deliver the highest quality products. It’s great to see PEMEX in Formula One and we look forward to celebrating a successful season of racing together."

About PEMEX:
PEMEX, the Mexican oil and gas company is one of the most important corporations and the largest in Latin America. It has been recognized as the most valuable company in México in 2017 as well as in Latin America in 2018 by Brand Finance (one of the most important global brand valuation company). PEMEX has become one of the few, fully integrated oil companies, by developing an entire process chain: beginning with exploration, production, industrial processing/refining, logistics and marketing. It operates under the PEMEX franchise, the gas station business model that has provided gasoline and diesel within the country under the PEMEX brand for more than 25 years. The PEMEX franchise was renovated in 2017 in order to offer new benefits and experiences to its franchisees and consumers, becoming the most competitive option in the oil and gas market.