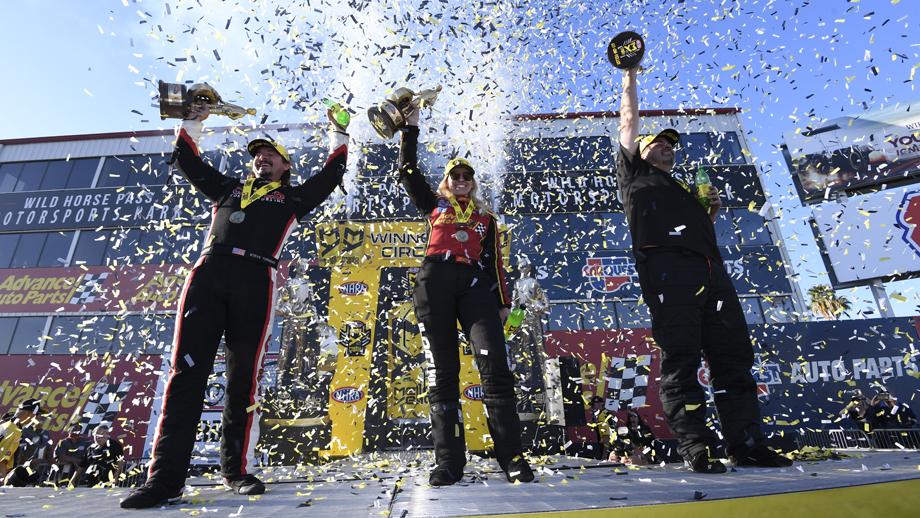 Courtney Force took home the Funny Car victory with a run of 3.834 seconds at 337.16 mph to take down Tommy Johnson Jr. in the final round. After earning the No. 1 qualifier on Saturday, Force secured her first victory since Houston 2016.

“Having [crew chief] Brian Corradi on my team and working with Dan Hood has been a great connection for our entire team," Force said. “I had the utmost confidence to get in the car today because of the job my team does on it, so to get a victory at this race and take home a Wally at the end of the weekend is pretty incredible."

Steve Torrence (Top Fuel) and Chris McGaha (Pro Stock) are also winners in their respective categories at the second of 24 events on the 2018 NHRA Mello Yello Drag Racing Series schedule.

Torrence powered his dragster to victory with a run of 3.729 at 330.72 to take down Scott Palmer in the final round. After locking down a career-best eight victories in 2017, Torrence recorded a victory in Phoenix for the first time in his career.

In Pro Stock, McGaha drove to the winner’s circle with a 6.529 at 211.59 run to defeat Jason Line in the final round. He secured his sixth career victory and first since winning the Four-Wide Nationals last season in Charlotte.