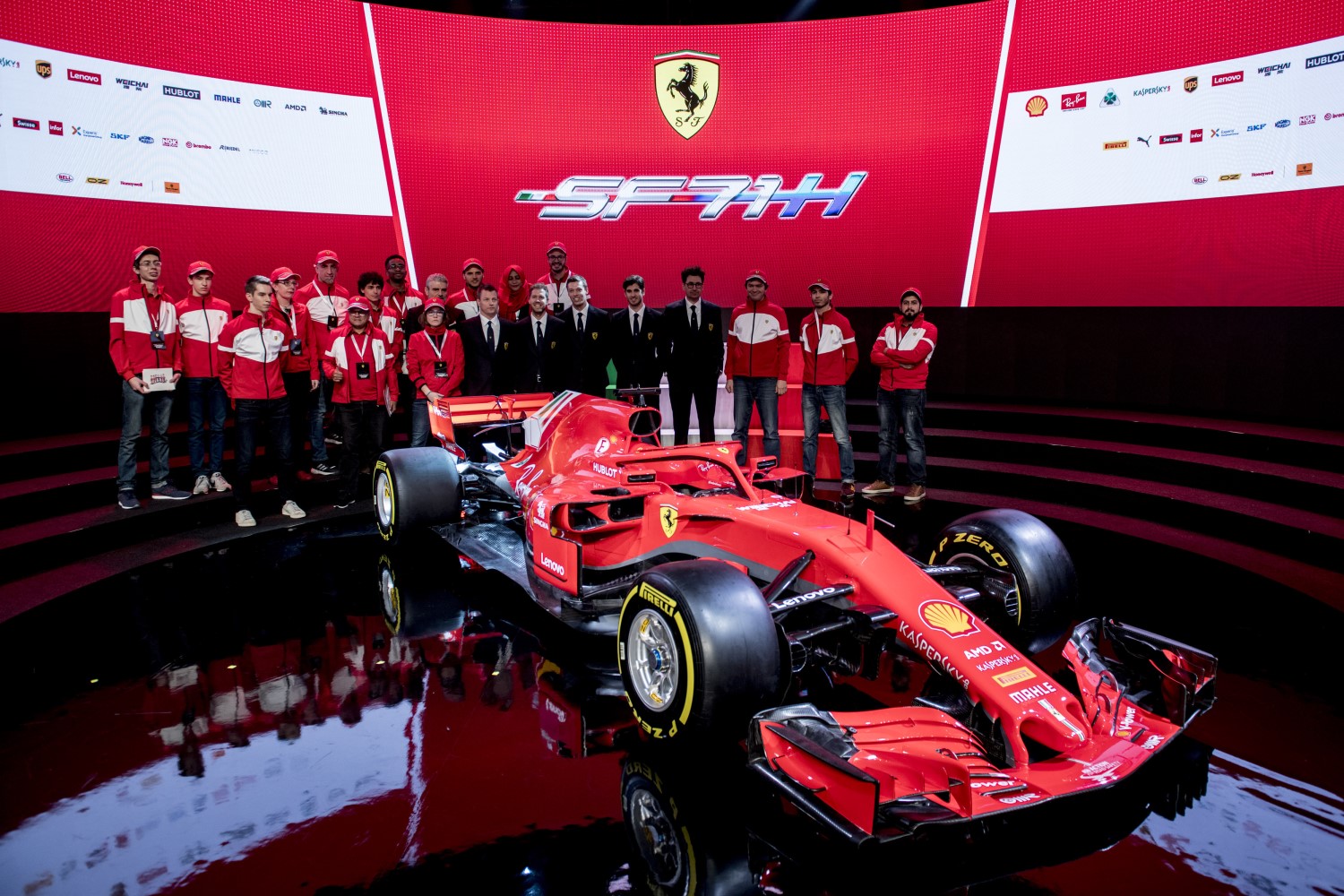 Ferrari has unveiled its latest grand prix racing car, the SF71H, ahead of the 2018 Formula 1 season and its design is a lot like the new Mercedes – a longer wheelbase this year, like the Mercedes and a much narrower car, especially at the back. The sidepods are especially aggressive and it remains to be seen whether Ferrari has caught and passed Mercedes in performance

Before Ferrari dignitaries the new car was shown off at Ferrari's Maranello base on Thursday, four days before the start of F1's pre-season testing at Barcelona.

The SF71H is the first Ferrari F1 challenger since the 2009 machine not to feature sponsor Santander branding.

The 2017 Mercedes and Ferrari were notably different design concepts, but Ferrari made clear at its launch that this year it has moved towards the longer-wheelbase philosophy favored by Mercedes. A longer wheelbase car is faster on high speed circuits and a shorter wheelbase car, like last year's Ferrari, is faster on slower circuits like Monaco and Hungary.

On the engine side, whereas Mercedes has an while new engine, Ferrari will start the season with an evolution of last year's design focusing on reliability in particular with F1 moving to a limit of three engines per season.

The SF71H (the code name for the 669 project) is the sixty fourth single-seater car designed and produced by Ferrari to compete in the Formula 1 World Championship. Rule changes introduced last season led to the introduction of significant aerodynamic modifications and wider tyres, all aimed at increasing performance.

Therefore the new 2018 Ferrari F1 car has been created to make the most of the experience gained last year. Compared to 2017’s SF70H, the wheelbase has been changed slightly, with the side dimensions also revised along with the cooling system. The suspension follows the tried and tested practice of using push-rods at the front and pull-rods at the rear, however, their design has been updated based on experience gained during the first season running the wider tyres.

The most obvious element to catch the eye is the Halo, designed to protect the cockpit area. After two years of on-track testing, it has now entered the rule book. It weighs around 7 Kg, plus fittings and this has only been partly compensated for with an increase of 5 Kg – from 728 to 733 – to the minimum car weight set in the 2018 regulations.

The number of V6 engines that can be used over the course of the season, without incurring a penalty, continues to decrease, this year from 4 to 3. The same number applies to the turbo-compressor and MGU-H – the energy recovery system attached to the turbo – while only 2 MGU-K -the device that generates kinetic energy linked to the transmission – are allowed over the year, a figure which also applies to the electronic control unit and the batteries. Therefore those in the engine department have also based their work on these new parameters.

After it’s launch on Thursday 22nd February, the SF71H will be transported to Barcelona’s Catalunya Circuit, for a filming day on Sunday 25th, followed by the start of testing proper on Monday 26th. The first session runs to the end of Thursday 1st March, while the second test takes place at the same circuit from 6th to 9th March. Both Scuderia Ferrari race drivers, Kimi Raikkonen and Sebastian Vettel will be driving.