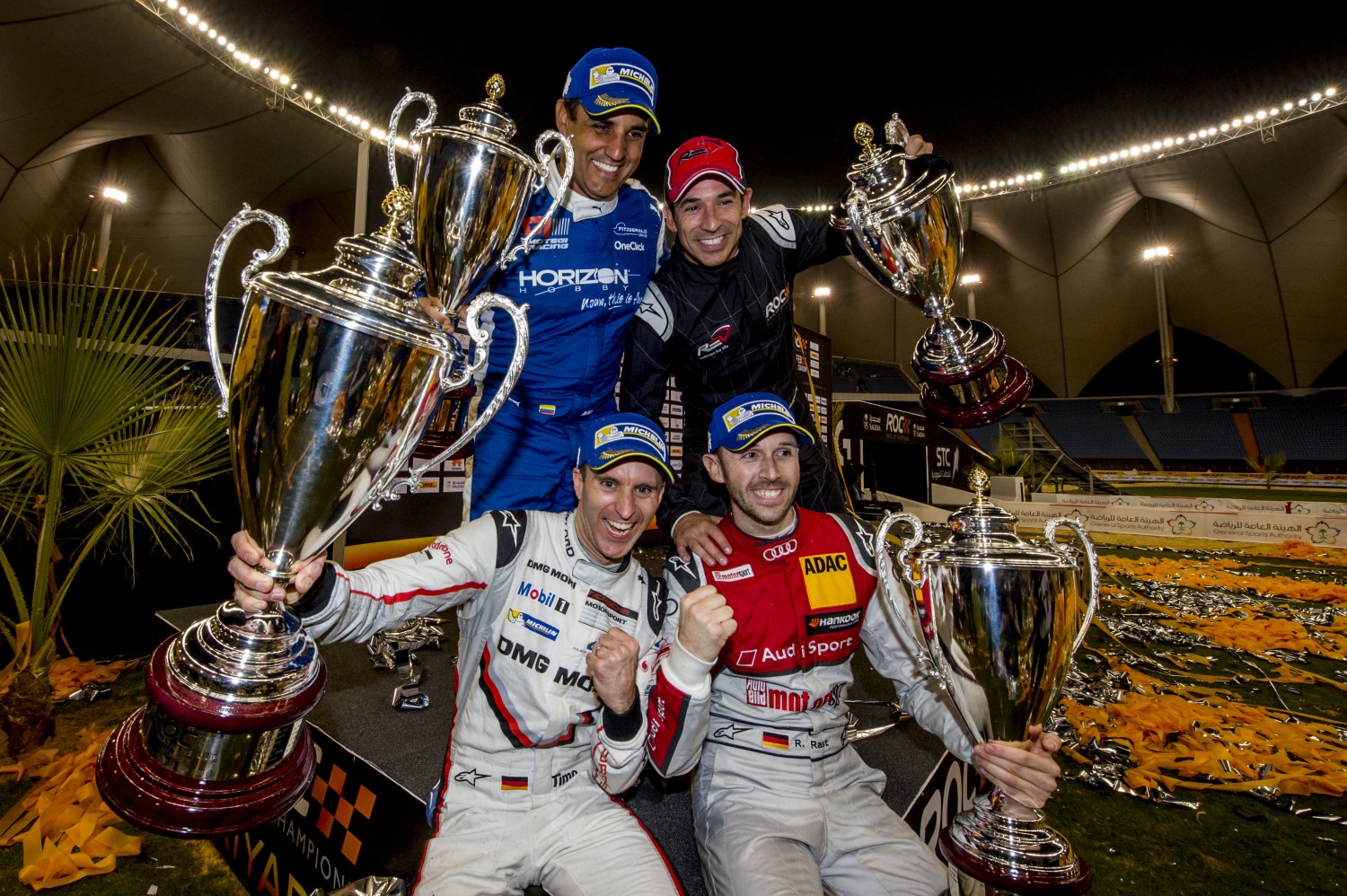 On a chilly evening in the Saudi Arabian capital, legends from the world’s biggest motor sport series teamed up in pairs to battle for national and regional pride. They raced a mix of cars – including the Vuhl 05 ROC Edition, Ariel Atom Cup, Xtreme Pickup, Whelen NASCAR, KTM X-Bow Comp R and the ROC Car – on a purpose-built parallel track featuring a unique crossover bridge.

And what an evening of action it was – as Bernhard and Rast prevailed in the final against the might of Team Latin America’s IndyCar legends Juan Pablo Montoya and Helio Castroneves.

In the first heat Rast beat off the challenge of Colombia’s Montoya. Castroneves struck back by beating Bernhard in the second heat but Rast was just too strong in the finale to win the ROC Nations Cup for Team Germany for a record eighth time.

Afterwards a delighted Bernhard said: “It was a great team effort today. We made it through to the final, then Rene put together two good heats. I was not so happy with my heat because I did a small mistake against Helio, but Rene pulled it off. We know Team Germany have a big history here at the Race Of Champions. In Germany we call the team ethic ‘Mannschaft’ and there’s something about it that also seems to correlate with motor sport. So we’re very proud to win the ROC Nations Cup.

“To be honest we didn’t have big expectations today, we just wanted to survive the first round. But now we’re very proud to be sitting here with that big trophy. I first came to the Race Of Champions with my Dad when it came to the NÃ¼rburgring in 1989. So it’s great to be here at the event for the first time. Now my name will be on this trophy. So it’s a very special honor."

Rast added: “Here at the Race Of Champions you go up against the best of the best. So there was a lot of pressure in that final race. I won my heat against Juan Pablo, then we had a very close race between Timo and Helio so it went to the finale. But the whole event is so much fun and I’ve really enjoyed being here, driving against these big stars. There are all these names that I used to watch when I was young: in Formula 1, in World Rally, all these different categories. So now to compete against these guys and to end up winning? It’s like a dream come true…"

Beaten finalists Team Latin America also had a fine evening’s work but they narrowly missed out on bringing home the trophy.

Castroneves said: “It’s been great to be here at the Race Of Champions in Riyadh. There’s been a great crowd and I really enjoy this format of racing. You have to drive on the limit but at the same time be very precise. When you see the other car on the track you just want to go faster! So yes, we all want to win and put our names on the trophy, but the main thing was to put on a great show for the public. I messed up in the final heat, but well played to Team Germany. At least I know the limit now so hopefully when we come back tomorrow I can go one step further…"

Montoya added: “The guys who win this event are the guys who adapt to any car. I thought I could beat Rene in the final but in the end he did a good job while I made some mistakes. And in those final races, mistakes go a long way. Looking ahead to tomorrow’s individual race, as always it depends what kind of job you do on the day. But the track is amazing. This stadium gives us a lot more room than last year so the track is longer, it’s a lot quicker and harder on the cars because you can see people making mistakes and hitting the wall…"

Team Saudi Arabia (Yazeed Al-Rajhi and Ahmed Bin Khanen) thrilled their home fans in the Riyadh stadium by making it as far as the semi-finals before they were beaten in straight heats by Team Germany.

The other semi-final featured an epic battle between many of the biggest names of global motorsport as Team Latin America took on Team Nordic (Mr. Le Mans Tom Kristensen and World Rallycross Champion Petter Solberg). Montoya and Solberg took a win each before the Colombian won the decisive final heat.

The evening’s action began with the 11 teams – an all-time record entry for the ROC Nations Cup – split into three round-robin groups. On a night of match-ups between global stars of world motor sport, many greats fell by the wayside at this early stage.

Team USA (IndyCar champions Ryan Hunter-Reay and Josef Newgarden) were one of the early casualties. Newgarden took two wins but it wasn’t enough to see them through a very competitive group A. The other pairing knocked out was Team Mexico (Memo Rojas and Abraham Calderon) despite their single win.

Team Germany topped Group A with five wins while Team Latin America took four wins – including three out of three for Montoya – and they progressed as the best second-placed team.

Group B also saw some huge names go out of the competition, not least Team Great Britain – despite a win apiece for David Coulthard and Lando Norris. Team Nordic and Team Sweden’s Johan Kristofferson and Joel Eriksson both finished on four wins, but the Nordic pair qualified for the semi-finals on countback of fastest times.

The revelations of the night were surely Team Simracing All Stars (Rudy van Buren and Enzo Bonito) for whom Van Buren took two wins against the professional racers, but it wasn’t quite enough to help the gamers make it any further.

Group C was an all Middle East affair and it was an incredibly tense affair, with all three teams finishing with two wins. But it was Team Saudi Arabia who thrilled their home fans by going through on countback of fastest times. That meant Team UAE (Khaled Al Qubaisi and Khalid Al Qassimi) and Team Lebanon (Karl Massaad and Mansour Chebli) bade farewell to the competition.

Earlier in the day Enzo Bonito came out on top in the first ever eROC competition between some of the world’s fastest gamers. The action took place both in real-life ROC Cars on the Riyadh track and in the virtual world of Assetto Corsa.

The Italian saw off the challenge of Britain’s F1 eSports World Champion Brendon Leigh in an enthralling final to win his place on the grid for the ROC Nations Cup and the Race Of Champions. French gamer Kevin Leaune and Germany’s Alexander Dornieden also performed well but were knocked out in the group stages.

There is plenty more action to come in Riyadh on Saturday as the drivers put their regional friendships aside and go it alone in the individual Race Of Champions. All the action starts at 4pm local time in Riyadh (UK time +3).

Territories without a live broadcaster can watch the live stream on www.raceofchampions.com and ROC’s Facebook page

The top two from each group will progress to the quarter- finals. Then it’s a straight knockout tournament all the way to the best-of-three Grand Final, in which the ROC Champion of Champions will be crowned.