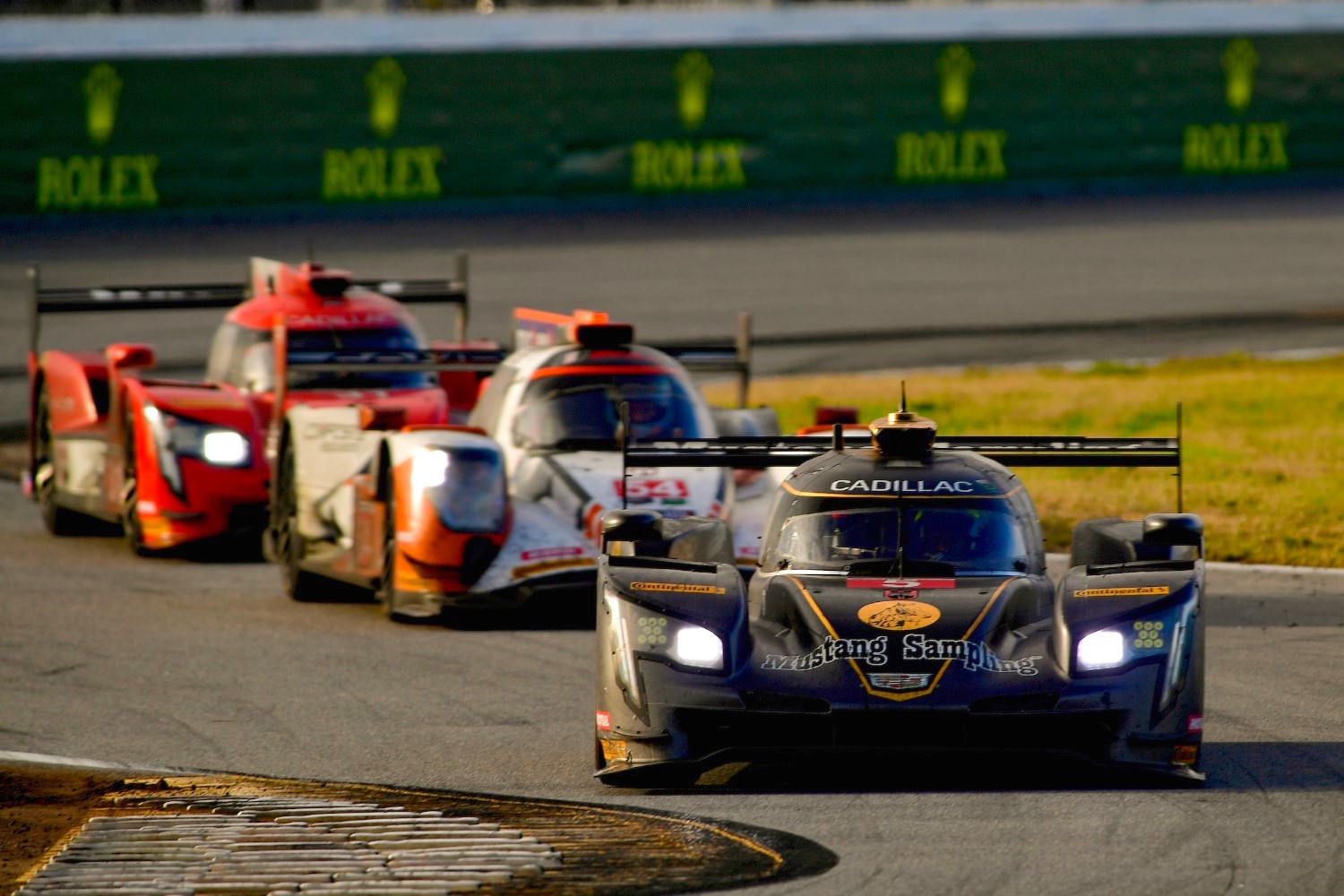 Both the Nos. 5 and 31 Cadillacs made separate trips to the garage for overheating issues in the final seven hours.

A collision with the No. 7 Team Penske Acura ARX-05 early also resulted in a nose change to the No. 31 car, and subsequent penalty.

The pair of Action Express entries beat down challenges from Acura, Nissan, Mazda and the two fellow Cadillac entries, which all hit trouble to varying degrees in the race.

It marked the team's third victory in the race and first since 2014, a race also won by co-drivers Joao Barbosa and Christian Fittipaldi.

The car completed 807 laps, beating the previous distance and lap record helped by only four full-course cautions for a total of 20 laps.

Colin Braun took the No. 54 CORE autosport Oreca 07 Gibson to a podium finish in third, benefiting from clutch issues for the No. 32 United Autosports Ligier JS P217 Gibson, which lost several laps in the closing hours.

The No. 32 United Autosports Ligier was fourth, with the No. 78 Jackie Chan DCR JOTA Oreca completing the top-five overall.

Ryan Briscoe in the #67 Ford GT held off Joey Hand the #66 Ford GT to win the GTLM class.

Ryan Briscoe, Richard Westbrook and Scott Dixon combined in the No. 67 Ford GT to lead a 1-2 finish for the manufacturer and take its second straight GTLM victory in the Rolex 24 and the car's third 24-hour triumph.

It marked the 200th race win for Chip Ganassi Racing and eighth for the team in the Rolex 24. Team owner Chip Ganassi was Grand Marshal for the event.

Corvette Racing finished third and fourth with Antonio Garcia taking the No. 3 Corvette C7.R to third while Marcel Fassler finished fourth in the No. 4 car.

Bortolotti jumped in the car with over two hours remaining held off the No. 86 Michael Shank Racing Acura NSX GT3 of Alvaro Parente and the No. 48 Paul Miller Racing Lamborghini of Andrea Caldarelli to clinch the win.

Head of Lamborghini Motorsport Giorgio Sanna has hailed the manufacturer’s first-ever 24-hour victory as its biggest triumph yet, stating it’s a “big emotion" to claim Rolex 24 at Daytona class honors in only its third attempt.

It came following a dominant performance in the second half of the race for the Italian manufacturer, which also placed third with the No. 48 Paul Miller Racing entry.

“It’s the first 24-hour victory for the brand," Sanna said.

“And to do it in Daytona with a challenging race like we’ve seen this weekend is a big emotion and a honor for the entire Squadra Corse.

“We’re proud to show our capability to the entire world.

“Our mindset and strategy is always to move step by step. Last year we won a lot of sprint races and also in Blancpain GT Endurance [Cup].

“This year, one important target was to win at least one classic race. We did it."

The signs say Daytona International Speedway, but the GTLM class podium had an all-Detroit feel as the Ford CGR winning trio of Briscoe, Westbrook and Dixon were joined by their Ford GT teammates Hand, Mueller and Bourdais, the 2017 Daytona winners. The win is Dixon’s third (two overall), Briscoe’s second (one class) and Westbrook’s first at the Rolex 24.

“It was just an amazing 24-hour race for us. Racing with your teammates, they’re your friends," Westbrook said.

“Racing that hard for 24 hours, there was nothing in it. It felt like ages we were one second apart. I thought we put on a really good show. To come away with the 200th win for Chip, and with (the late) Dan Gurney on our car made this ever so sweet."

Corvette Racing then placed its two Corvette C7.Rs in third and fourth place to kick off its 20th year of competition. Polesitter Jan Magnussen shared his No. 3 car with Antonio Garcia and Mike Rockenfeller to finish third, ahead of the No. 4 car of Oliver Gavin, Tommy Milner and Marcel Fassler.

Magnussen and Garcia (2017) and Gavin and Milner (2016) have won the WeatherTech Championship GTLM titles the last two years, and past Rolex 24 winners Rockenfeller and Fassler are added as third drivers for endurance races.

"After a triumphant return last year to endurance racing, Cadillac came into the 2018 season looking to build upon our 2017 Manufacturer's Championship. We expected formidable opposition from the world-class competitive field, and this was precisely what the season opener at Daytona has delivered. Victory at this renowned race requires speed, reliability and hard work, and the professionalism of all our teams who competed in this year's Rolex 24 Hours At Daytona was on display this weekend. "

"After a memorable 2017 season, it is great to have the Cadillac DPI-V.R. win the Rolex 24 At Daytona for the second consecutive year. Congratulations to Joao, Filipe and Christian on their outstanding drive.

"Action Express demonstrated strong race strategy and great team work. It was good to see the team deliver a one two finish at one of the most challenging races of the year.

"I am really proud of the team work between the Cadillac Racing engineers, ECR and the Action Express staff. What an exciting way to start the 2018 IMSA Prototype season."

"I was looking all the time to the water temperature and oil temperature and it is flashing on and off at the same time. I am seeing the 31 and the 54 gaining laps and laps and I had to overtake the GT cars at the same time. It was really hard to manage. When you have to back-off, it takes heat out of the brakes and you get pick-up on the tires. I started hearing every little thing with the car. In the end, the Cadillac engine behaved very well and was able to handle the high temperatures for the win."

"It was not just the last hour, but the last six hours that we had to manage a lot of things inside the car. The team did a tremendous job to manage things outside of the car. It is easier to really push than to drive slow and manage your pace. The Cadillac ran well and we made it to the finish. The team did a flawless job. With last year's disappointment, we finally got one!"

"At this stage of my racing career this win is very sweet. I am not sure how many more of these Daytona races I have left, not like Filipe who probably has 15 more years and tries. It is unbelievably sweet after what happened last year. We have been racing together for the last three seasons. I want to thank Action Express, Cadillac and Mustang Sampling. The team prepared a great a car and we delivered on the track."

"The start was pretty good for us. The opening lap I went from seventh to third, which showed the pace of our Cadillac. The Whelen Cadillac was strong from the beginning. We had the pace to be upfront most of the race. We led a lot during the 24 hours. We had to deal with some overheating. Every time just trying to minimize the effects and keep it out of the garage. There were not many yellow flags to recover laps, which made our life very difficult. A one-two finish is a great result. I am pleased with my first race with the team."

"Overall the Whelen Cadillac was strong all race long. The team performed great in the pits. We were there, at the top. Every one of us had a chance to lead. We just had some small issues. I was leading and we lost a brake light. We had to come in and fix it. Then, we had some overheating issues, had to come in again. For the team, a great one-two finish. It would have been nice to leave with a watch, but it is a great start to the season."

"The team gave us a car that had the chance to win, which is all you can ask for as a driver. Compared to last year the competition was big. It was non-stop action. Even a car 10 laps down is tough to get by as they are close in lap times. With Felipe, Eric and Stuart they all did a great job. A great day to be a part of a one-two finish with the season."

"My first time in a prototype race was fantastic. I did long stints, I was still learning the Cadillac over my time in the car. I am very happy with the result. My first time driving a prototype in a 24-hour race to come second is great. I am very thankful to the team and Sunoco for making possible."