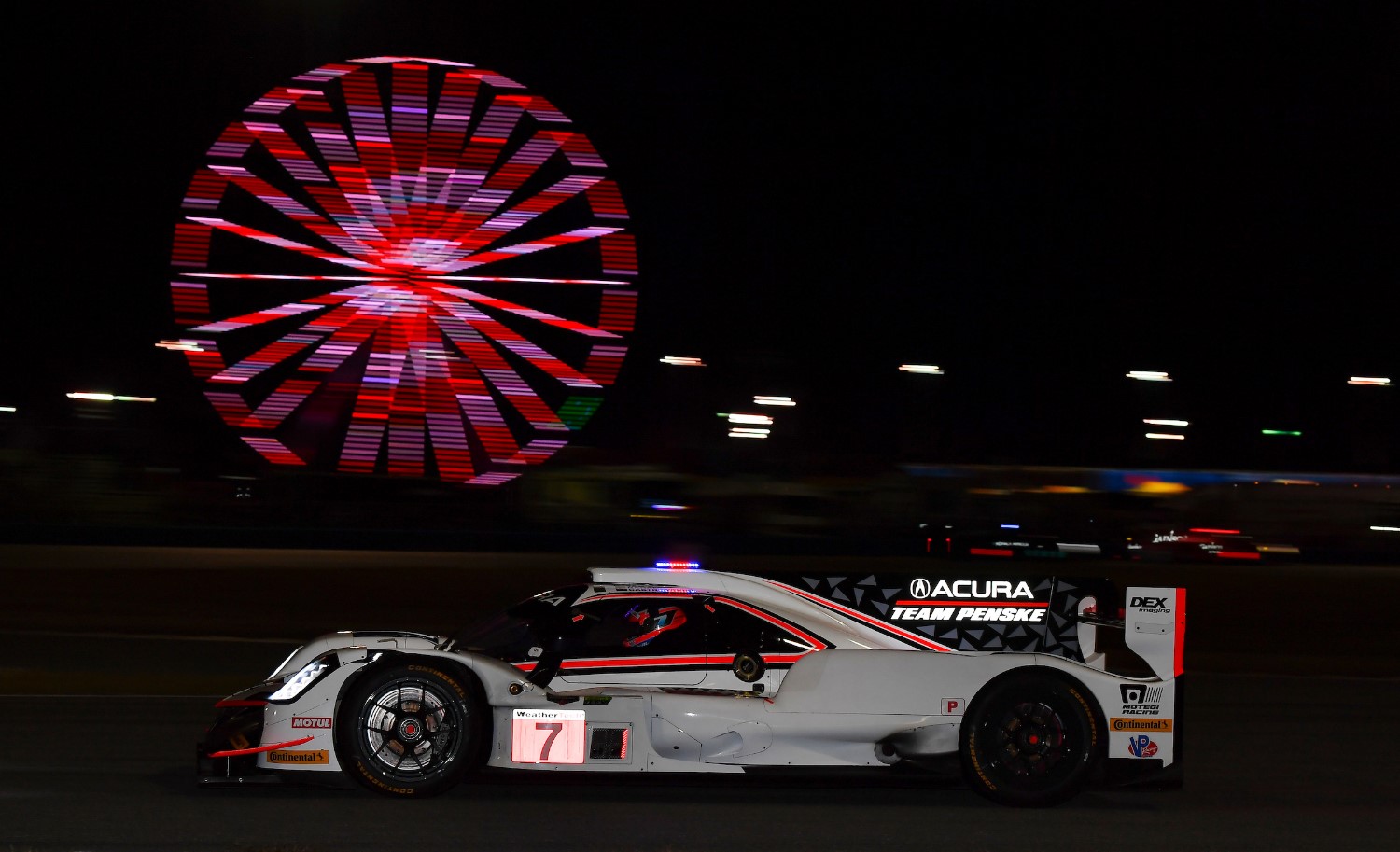 Simon Pagenaud leads the way just past the halfway mark of the Rolex 24 at Daytona after inheriting the top spot when 12-hour mark leader Team Penske teammate Graham Rahal spun in Turn 1 while leading.

Attrition has set in.

Among the contenders that ran into issues during the overnight hours was the defending race champion No. 10 Konica Minolta Cadillac DPi-V.R. of Jordan Taylor, Renger van der Zande and Ryan Hunter-Reay. Running in the second position, van der Zande went behind the wall at the eight-hour, 30-minute mark after a tire puncture led to a damaged radiator.

The team was able to make repairs, but currently sits 10th, nine laps down.

With cars falling by the wayside, the No. 6 Team Penske Acura DPi of Dane Cameron, Juan Pablo Montoya and Simon Pagenaud finds itself leading after inheriting the position from Team Penske’s No. 7 entry when Graham Rahal spun in Turn 1 with a five-second lead nine minutes shy of the halfway mark.

The GT Le Mans (GTLM) class has been all Ford with Chip Ganassi Racing’s pair of Ford GTs running 1-2 for the second consecutive segment. Last year’s Rolex 24 winners lead at the end of the second consecutive PatrÃ³n Endurance Cup segment with Joey Hand, Dirk Mueller and Sebastien Bourdais in the No. 66 opening up a two-point lead over the No. 67 of Ryan Briscoe, Richard Westbrook and Scott Dixon.

Moving into the lead in the GT Daytona (GTD) class was the No. 86 Michael Shank Racing with Curb-Agajanian Acura NSX GT3 of Katherine Legge, AJ Allmendinger, Alvaro Parente and Trent Hindman. They lead a pair of Lamborghini Huracan GT3s with the No. 11 GRT Grasser Racing Team and No. 48 Paul Miller Racing entries.

The race was slowed by its second caution when the No. 52 AFS/PRI Mathiasen Motorsports Ligier LMP2 of Roberto Gonzalez spun in the race’s 14th hour and could not continue.

– The hometown favorite Spirit of Daytona Racing team was the first entry to retire from the race. The team went to the garage shortly before the nine-hour mark with an engine misfire that could not be diagnosed or repaired at the track.

– The No. 23 United Autosports Ligier LMP2 went behind the wall in the race’s 11th hour with a brake issue. Prior to that, Fernando Alonso raced from three laps down to within one lap of the leaders after the car suffered a tire puncture in the eighth hour. The team now sits 15th, 25 laps down.

– One of the contenders in the GTLM class ran into trouble when the No. 911 Porsche 911 RSR of Nick Tandy went off course in the chicane and made contact with the tire barrier shortly into the race’s ninth hour. The car later returned to the track, but sits eighth in the nine-car GTLM field.

– The No. 2 Tequila PatrÃ³n ESM Nissan DPi also suffered mechanical issues with Ryan Dalziel going behind the wall with just over 14 hours remaining with a possible gearbox issue. Dalziel was running fifth.

– During the 11th hour of the race, the No. 29 car, which was leading the GTD class, was assessed a stop plus five minutes penalty for a violation of Attachment 2: Balance of Performance of the 2018 IMSA Sporting Regulations & Series Supplementary Regulations.