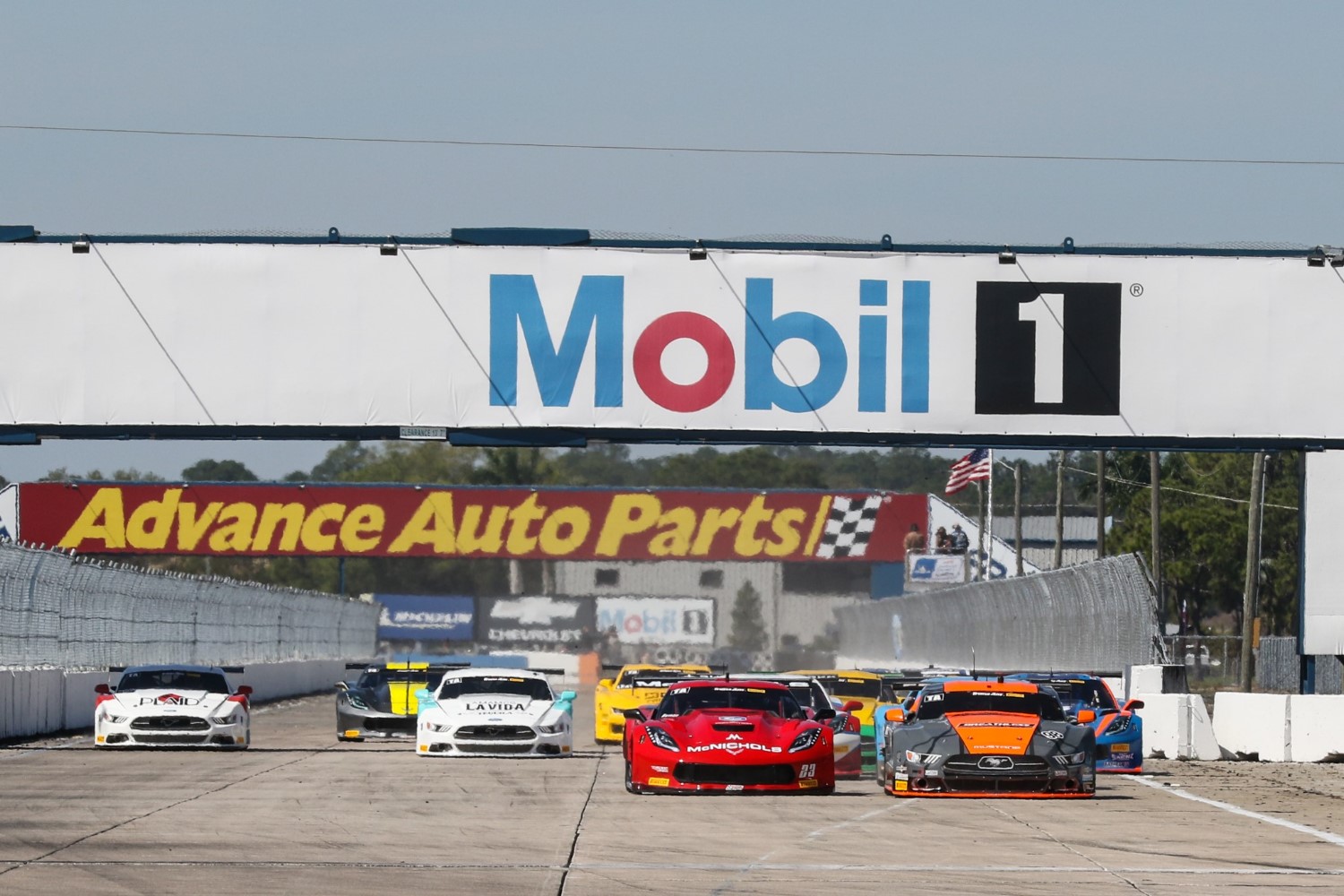 Ernie Francis Jr. kept the action in his rear-view mirror Sunday at Sebring International Raceway, beginning his quest for a seventh-consecutive Trans Am Series Presented by Pirelli title with a flag-to-flag victory in Sunday’s 2020 season-opening race.

Driving the No. 98 One South Florida Wealth Advisor Ford Mustang, Francis was joined on the podium by Tomy Drissi in the No. 8 Lucas Oil Chevrolet Camaro, followed by Amy Ruman in the No. 23 McNichols Co. Chevrolet Corvette.

Erich Joiner became the first winner in the new Trans Am XGT class, taking sixth overall in the No. 10 Championship Coffees and Tool Porsche 911 GT3 R. SGT went to Lee Saunders in the No. 84 Landsearch LLC Dodge, while Steve Davison led GT in the No. 22 Davinci Plastic Surgery Aston Martin Vantage.

“My team gave me a great car, and it was fast right off the trailer," said the 22-year-old Francis, who took his 20th overall (and 44th career) Trans Am victory. “We had the pace all the way to win this race. It was awesome for the first race weekend of 2020, and I can’t wait for the rest of the season. My new sponsor – One South Florida Wealth Advisors – was here supporting me all weekend. This was a great event, and now I can’t wait to get to Road Atlanta."

Francis led from the pole and managed to pull away on two restarts, with the race ending under the checkered flag due to a late incident. Humaid Al Masaood (No. 21 Mustang) and Simon Gregg (No. 59 Corvette) rounded out the top five.

The race featured a pair of charges from the back of the TA grid by Drissi and Chris Dyson.

Drissi experienced transmission troubles in qualifying on Saturday and gridded 11th for the season opener. Launching from the back to a podium finish also earned Drissi the Cool Shirt “Cool Move of the Race" award.

“I tried to use some wise aggression to move up from the start," said Drissi. “We had gremlins in qualifying, so I had to baby the car a little bit. I had a good battle with Adam Andretti and Chris Dyson, I’m sorry they weren’t able to finish the race. I want to say that the SGT and GT class drivers did an awesome job in the traffic, and it is great to be up here with two champions, Amy (Ruman) and Ernie (Francis Jr.)."

Dyson joined Drissi on the back row due to a hard impact hit in Saturday morning practice. After the CD Racing squad labored through the night to be ready to race, Dyson was ready to repay that work with a big result. Passing seven cars on the opening lap, Dyson was quickly up to third. On lap seven, Dyson made a bid for the lead on a restart following a brief caution, going three wide in an attempt to get by Francis and Andretti. Dyson came up short but continued to run in podium position until his day came to an end when he pulled off just past the midway point.

“After that restart, the engine note was not the same and it was just off a bit," Dyson said. “So I was just trying to get it home to get points. I’m really happy for Humaid Al Masaood to get fourth. Great consistency from him and we got a top-five out of it. This was a monumental effort (from his team to have the car ready to go), it was a tough weekend, but we will focus on the positives from the weekend."

The caution waved for a second time on lap 20, when several cars went off in Turn 6, with the No. 41 PF Racing Ford Mustang of James Pesek coming to a stop. Under the caution, Andretti retired the second-place No. 43 ECC Anchor Bolt & Screw Dodge Challenger due to mechanical issues. Daniel Urrutia Jr. also went out with a clutch issue on top-five running No. 3 Ferrea Racing/SAENZ/Mustang Vac Chevrolet Corvette.

The second caution set up a potential five-lap shootout to the checkered flag, with Ruman challenging Drissi for second. However, a race-ending caution arrived moments later when Tim Kezman crashed in the final turn in the No. 44 Lemons of Love Porsche 991 Porsche GT3 Cup while battling for the SGT lead.

Jon Leavy in the No. 18 info@morprinting.com Chevrolet Camaro took the Masters Award in the TA class after a solid seventh-place finish.

“I spent hours on the simulator before coming here," Joiner said. “I thought I could get it down quickly, but I was shocked when I got here. It’s very technical in the slow stuff, and it’s extremely fast in the first and last turns. I was blown away, and every lap was a learning experience. It was like going to school for me this weekend. I have to say- the whole Trans Am group and the way they put this on, and all the fans-it was a great weekend. Just driving around on the cool-down lap, there were fans all around the track standing up on motorhomes and clapping and waving. It was a fantastic race and experience."

Saunders added to his Sebring success after he prevailed in SGT competition, followed by Mark Boden in the No. 46 Beverage Flavors International Porsche 991.3 GT3 Cup and Adrian Wlostowski in the No. 96 F.A.S.T. Auto Racing Ford Mustang, who scored his first career podium finish despite a fire only 10 minutes prior to the call to the grid.

“It looked like it was going to be a shootout at the end," Saunders said. “I was extremely worried, because Tim [Kezman] was strong. We were trading the lead several times, and he was wearing me out. Mark [Boden] was right there, too. I was scared we were going to go green again, and I would be right back in the trap. I hope we can win some more, but I’m sure Mark will get the best of me more than I will him."

Larry Bailey in the No. 02 LogicalSystems/SamPierceChevy Chevrolet Corvette received the SGT Masters Award.

“I have to thank Automatic Racing, because I broke my car," Davison said. “So right now I’m on borrowed time, borrowed money and a borrowed car. Great start to the season, I really appreciate Trans Am and the awesome crowd support."

He was followed by Billy Griffin in the No. 14 Griffin Auto Care/Sheenan’s Towing Ford Mustang. Horrell led the opening half of the race before pulling off in the No. 45 Breathless Racing Porsche GT4 Clubsport, finishing third in the class.

Next up for the Trans Am Series Presented by Pirelli will be at Michelin Raceway Road Atlanta on Sunday, March 29.