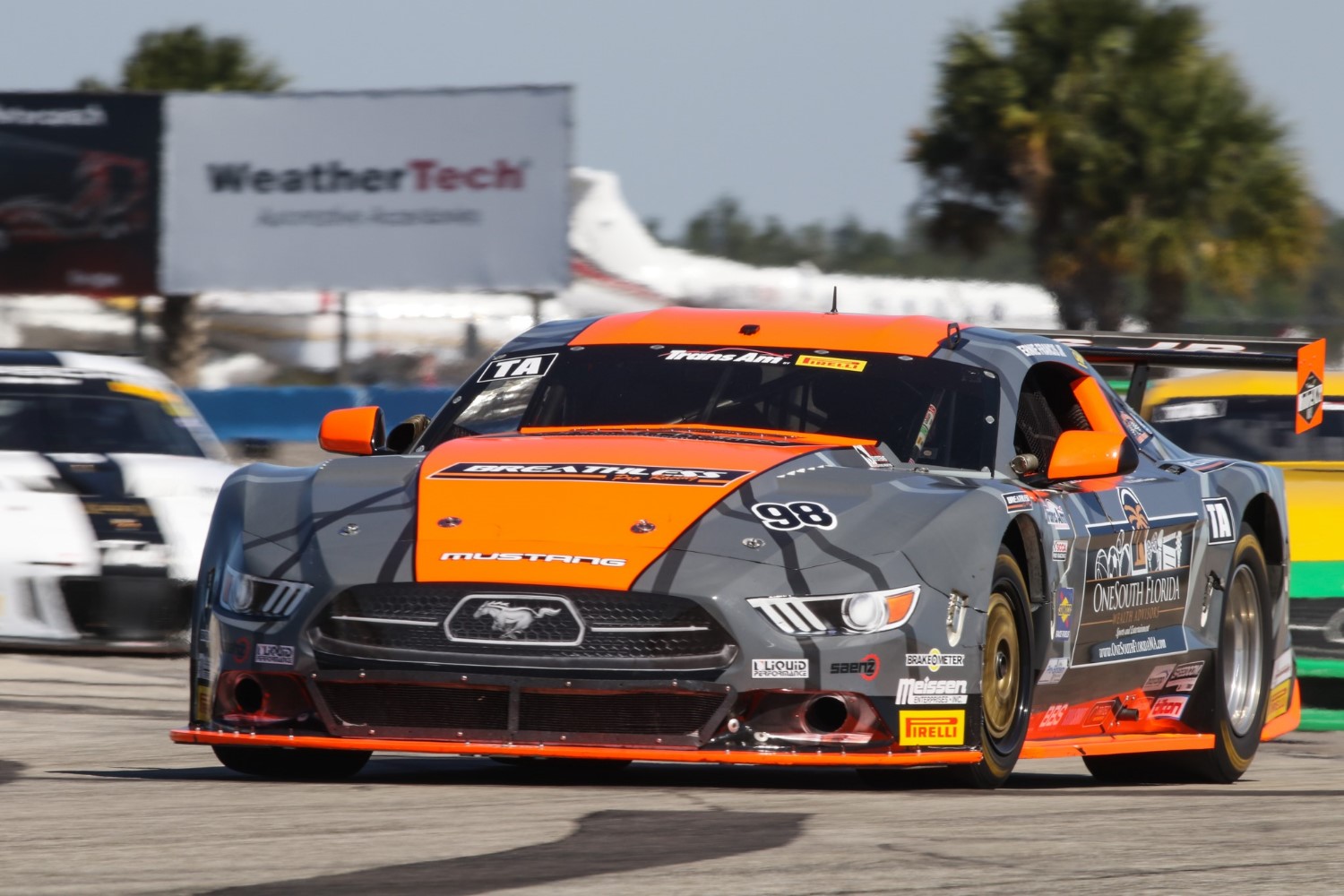 Large fields filled with deep talent set a highly competitive tone during the first qualifying sessions of the Trans Am Series presented by Pirelli season on Saturday (February 29) at Sebring International Raceway. Eight different teams representing four manufacturers slotted into the top eight positions during the Trans Am qualifying.

Reigning TA champion Ernie Francis Jr. captured pole position for the opening Trans Am race of the 2020 campaign, turning a fast lap of 1:59.266-seconds in the No. 98 One South Wealth Advisors Ford Mustang on his Sebring home track. Bolting to the top of the time sheets early in the session, Francis Jr. broke the two-minute barrier at Sebring for the first time in Trans Am history.

"I feel really good to get back on track at one of my favorite places that we run all season," said Francis Jr. “It felt really good around here. We tested here a few weeks ago and clocked in some really quick laps. We knew in yesterday’s practice that we’d rolled off the trailer with a very fast car. This qualifying session showed it, and we were able to set the pace for the race and I think we are going to set the pace for the rest of the season."

Francis will share the front row with 2015 Sebring pole and race winner Amy Ruman, who ran a fast lap time of 2:03.04-seconds in the No. 23 McNichols Co. Chevrolet Corvette. Adam Andretti qualified third with a time 2:03.259-seconds in the No. 43 ECC/Anchor Bolt & Screw Dodge Challenger that is carrying a tribute livery to the late John Andretti. Joining Andretti on the second row is Simon Gregg, driving the No. 59 Derhaag Motorsports Chevrolet Camaro.

Tomy Drissi, who was second fastest in practice earlier in the day, returned to the pits following just one qualifying lap after experiencing mechanical issues. The Burtin Racing driver will start 11th, sharing the sixth row with 2019 Trans Am Vice Champion Chris Dyson. Dyson did not qualify after his No. 20 Plaid Ford Mustang was badly damaged in an incident late in Saturday morning practice. The New Yorker expects to have the car ready for Sunday’s 100-mile race.

The TA2 Powered by AEM class qualified late in the day on Saturday, and as the sun sank into the Florida horizon, it caused visibility issues early in the 15-minute qualifying.

But Stevens Miller Racing driver Mike Skeen rose to the occasion, shattering the three-year-old Sebring International Raceway track record with a lap of 2:06.513-seconds to take his Trans Am career pole. Skeen will lead the field to the green flag at in the class’ season debut behind the wheel of the No. 77 Liqui Moly/Turn 14 Chevrolet Camaro.

“It feels awesome to get the pole," said Skeen. “We had high hopes when Joe Stevens called me to drive the Liqui-Moly car. It was super competitive, there are a lot of really good guys here so we were not sure where we’d end up. But I’m really excited, and really impressed. The Stevens Miller team put a really good car together and I’m happy to represent them up front here already and hopefully we can do that again tomorrow."

Making his return to Trans Am, two-time champion Cameron Lawrence took second in TA2Â® qualifying with a fast lap of 2:06.809-seconds in the No. 8 3-Dimensional Services Group Chevrolet.

Sharing the second row in the 100-mile race will be Thomas Merrill, 2:07.224-seconds in the No. 81 Diehl-Merrill Racing/HP Tuners/MCR Ford Mustang; and Louis Philippe Montour, 2:07.606-seconds in the No. 13 Montour Ltd Chevrolet Camaro.

“The sunset played a huge role in visibility," commented Merrill. “There were several areas on the back straight where I had to dip down in my seat to see the track better. I got caught up in traffic and took the third fastest time. We are good from behind so I have confidence we can turn that starting position into a win tomorrow."

The new Xtreme GT class made its debut at Sebring International Raceway with a first-time Trans Am Series entrant taking top honors in qualifying. Erich Joiner won the pole, running 2:06.030-seconds in the No. 10 Championship Coffees and Tool Porsche 911 GT3 R. He edged out Ken Thwaits, 2:06.728-seconds in the No. 5 Franklin Road Apparel Audi GT GT3 Ultra, and Marc Montour, 2:07.272-seconds in the No. 27 Montour Ltd Aston Martin Vantage GT3.

Tim Kezman led the SGT competitors with a lap of 2:10-seconds in the No. 44 Lemons of Love Porsche 991 GT3 Cup, but he will have his work cut out for him on Sunday with heavy hitters Lee Sunders and Mark Boden starting behind him. Saunders, who has the most wins at Sebring in the SGT category, was second with a flying lap of 2:10.340-seconds in the No. 84 Landsearch LLC Dodge Viper, followed by 2019 SGT champion Mark Boden, (2:10.832-seconds) in the No. 46 Beverage Flavors International Porsche 991.1 GT3 Cup.

In his maiden GT qualifying, Tim Horrell broke the GT track record, with a time of 2:15.399-seconds in the No. 45 Breathless Racing Porsche GT4 Clubsport.

“It feels pretty amazing to go out there and put up the numbers that I knew I could do, and for that to translate into a pole position with my teams help. This feels great," said Horrell. “I’m looking for a steady constant race for a strong result tomorrow!"

Championship-driver Steven Davison will start off pole, clocking a 2:16.008-seconds in the No. 22 Davinci Plastic Surgery Aston Martin Vantage while Billy Griffin, 2:16.528-seconds in the No. 14 Griffin Auto Care/Sheehan’s Towing Mustang will lead the efforts from Row 2.

The 54th Trans Am Series presented by Pirelli season debuts Sunday, featuring two 60-minute races with the mixed class of TA/XGT/SGT/GT taking the green at 11:10 a.m. followed by a massive TA2Â® powered by AEM field lining up at 1:20 p.m. ET.

Fans can start streaming the action LIVE from the FREE Trans Am by Pirelli Racing app five minutes before the start of each race. The app is available for download in the Google Play and IOS App Store.