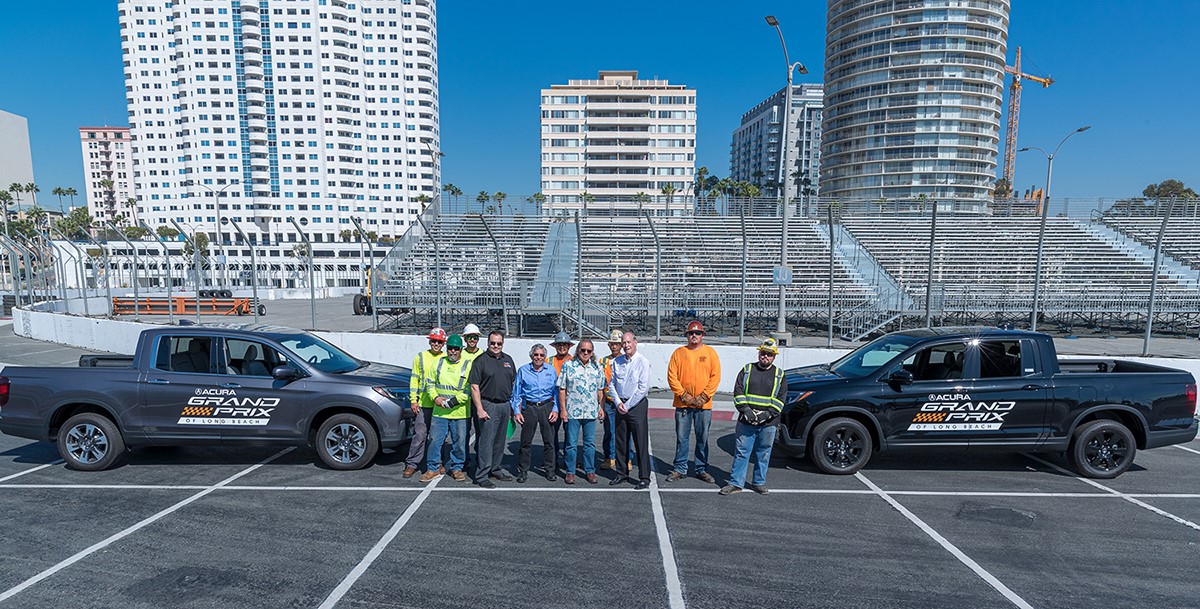 Construction has begun on the world-famous Acura Grand Prix of Long Beach race circuit in preparation for the April 17-19 race weekend.

Over the next 52 days, more than 2,400 concrete blocks that anchor the safety system around the 1.97-mile, 11-turn racing circuit will be placed along with 14 large grandstands that line the racecourse.

The first full day of track construction kicked off today with Acura giving two new Honda Ridgeline trucks to the Grand Prix Association of Long Beach’s Operations Department to assist with construction activities. In addition, management and workers from the Laborers International Union of North America (LIUNA), who help to build the racetrack, were on-hand to commemorate the start of construction.

“We’re entering our second year with our title sponsor Acura and we’re delighted with the relationship," said Jim Michaelian, president and CEO of the Grand Prix Association of Long Beach. “And we’re happy that LIUNA is back as a sponsor this year, as their skilled laborers have helped to build our racecourse for the past four decades. Our fans are going to once again see a first-class facility with three action-packed days of world-class racing and amenities."

All businesses along the race circuit, which includes Shoreline Drive, Aquarium Way and Pine Ave., will remain open during construction of the racetrack.

The Acura Grand Prix of Long Beach will be headlined by the third round of the 2020 NTT INDYCAR SERIES, as well as the third race of the 2020 IMSA WeatherTech SportsCar Championship. In addition, the weekend will include the Super Drift Challenge under the lights on Friday and Saturday nights; SPEED Energy Stadium Super Trucks, the powerful sports cars of the Pirelli GT4 America SprintX series and the new-for-2020 Historic Formula Atlantic Challenge. There will also be a Fiesta Friday concert with a well-known Latino band, as well as Saturday evening’s ASM Global Presents Bret Michaels. Both concerts are free to that day’s race ticket holders.

Fans can select and pay for their Grand Prix seats, parking and paddock passes online at gplb.com. Ticket orders can also be placed by calling the toll-free ticket hotline, (888) 827-7333. Also featured on gplb.com is the latest Acura Grand Prix of Long Beach news and racetrack information, photos and ongoing announcements of special race week activities.