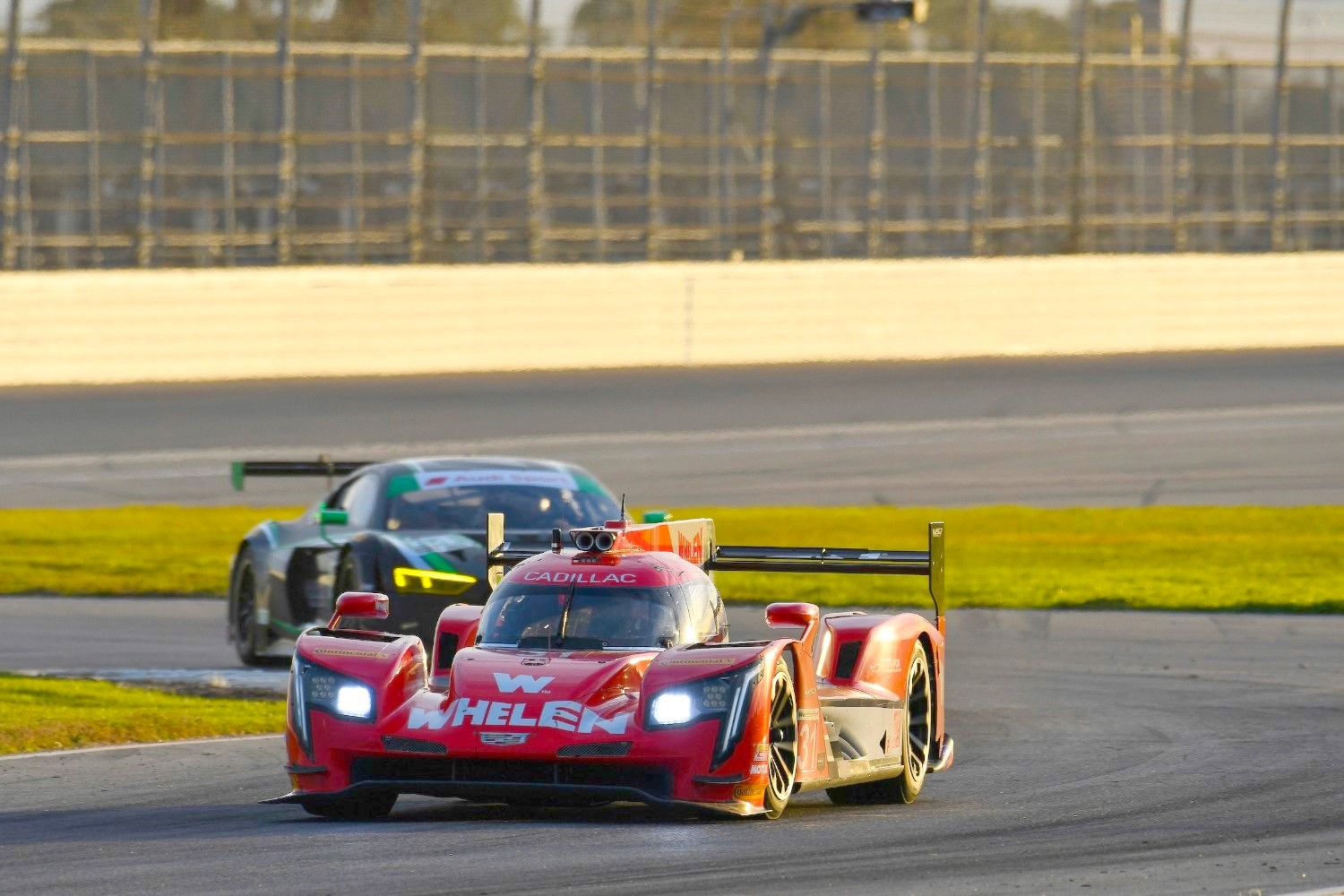 DAYTONA BEACH, Fla. – The strong pace shown by Cadillac, which led every session throughout the first two days of the Roar Before The Rolex 24 At Daytona test, carried into Sunday’s inaugural Roar qualifying session. The new-for-2018 qualifying sessions establish the garage and pit locations each team will use during the Rolex 24 At Daytona race weekend on Jan. 25-28.

Leading the way in a back-and-forth 15-minute session for the IMSA WeatherTech SportsCar Championship Prototype class was Brazilian driver Felipe Nasr in the No. 31 Whelen Engineering Cadillac DPi-V.R with a best time of 1 minute, 35.806 seconds (133.764 mph). Nasr was first in a top-four sweep for Cadillac, which is looking for its second consecutive Rolex 24 win after taking its debut race last year.

“All I have to say, is we as a team, Action Express and Cadillac, we brought the car out there to run the most amount of laps," Nasr said. “We were really getting into it and preparing for the race, because we know this weekend is more a part of what is going to come at the end of the month. We all felt pretty confident. We felt the car was behaving well.

“Today in qualifying, all I have to say, is myself and Filipe (Albuquerque), that was driving our sister car, we gave everything we had. The times were pretty close. There are some cars out there that aren’t showing fully what they can do, but I know we are. I’m pretty happy with what we have right now."

[adinserter name="GOOGLE AD"]Nasr is pleased to be back racing in the Rolex 24 At Daytona, a race that put him on the map somewhat when he earned a ride in the 2012 race as winner of what was then the “Sunoco Rolex 24 At Daytona Challenge" by taking the 2011 British Formula 3 title.

His performance in that race, which netted a third-place result, was impressive and paved the way for a career that ultimately took him into Formula 1. This year, he will race full-time in the WeatherTech Championship alongside 2016 Prototype champion Eric Curran in the No. 31 machine. For the Rolex 24, they welcome Mike Conway and this year’s Sunoco Whelen Challenge winner, Stuart Middleton, who is following in Nasr’s footsteps.

“There’s so many other things I got to experience here in a positive way – the racing, the people – it really opened up the doors for me here," Nasr said. “I became friends since then with everyone. I knew with a phone call to my American friends that I could be coming back to the race and that’s what I thought early on. As soon as I had a brief adventure in F1, let’s put it this way, I had great fun, but I knew this championship was always going to go up.

“I feel this year we have such a strong lineup of teams and drivers and everyone pushing each other that it’s going to be great. For a racing driver to be in an environment like this, and teams pushing each other, there’s nothing better than that. It’s really great to be involved."

Second quickest in Prototype qualifying was Tristan Vautier in the No. 90 Spirit of Daytona Racing Cadillac DPi-V.R with a time of 1:36.037 (133.442 mph). While the team has participated for several years in the WeatherTech Championship Prototype class, it is a newcomer to the Cadillac camp in 2018 after fielding LM P2 race cars last year. Vautier is sharing the car with full-season teammate Matt McMurry and endurance driver Eddie Cheever III.

“It was good," Vautier said. “All the Caddy teams, we came here with a good spirit. We want to show IMSA what we have and we pushed flat out the whole test, just because we want to maximize everything for the race and we think it is the right thing to do. We all pushed each other. I think it’s good because it helps us all to learn about the car and go get those last tenths we can find in the setups. For us at Spirit of Daytona, it’s been good, because the first time the car hit the ground was January 2. Things have been pretty straightforward."

Albuquerque was third in the No. 5 Mustang Sampling Cadillac he shares with Joao Barbosa and Christian Fittipaldi with a best lap of 1:36.135 (133.306 mph). Renger van der Zande was fourth at 1:36.481 (132.828 mph) in the No. 10 Konica Minolta Cadillac, co-driving with past IndyCar champion and Indy 500 winner Ryan Hunter-Reay, and defending race and series champion Jordan Taylor.

In three weeks, Joey Hand, Dirk Mueller and Sebastien Bourdais will go for their second consecutive Rolex 24 At Daytona victory for Ford Chip Ganassi Racing in the No. 66 Ford GT. The title defense got off to a strong start at the Roar, as Hand was the fastest qualifier in the GT Le Mans (GTLM) class with a best lap of 1:43.610 (123.688 mph).

“You’re always trying to win practice, but especially trying to win qualifying," Hand said. “We went for it. We struggled with our balance of the car a little bit this weekend from the December test. We really liked it. Dirk and Seabass (Sebastien Bourdais) and I were just bouncing it all weekend. We got it closer this morning, we think maybe it’s the temperature, and we made a change right between the practice and qualifying.

“We wanted to see how aggressive we could get. It was a better car, but it still needs to be a better race car. We’re happy with the progress. To finish out the Roar, I think we’re OK looking to come back. You never know what temperature you’re going to get when you come back, so you don’t want to really tune too much here, but you do want to learn some things that are right and wrong, but yeah, I’ll take it. Somebody’s got to do it, so I guess I can handle it."

The top six GTLM cars qualified within one second.

Lamborghini Huracan GT3s have been at or near the top of the time charts throughout the Roar Before the Rolex 24, including the class’ fastest overall lap of the weekend of 1:47.104 (119.653 mph) set in Friday’s first session by Rolf Ineichen in the No. 11 GRT Grasser Racing Team entry.

It was more of the same in Sunday’s qualifying session in which Ineichen’s teammate, Mirko Bortolotti, posted the fastest time of 1:47.374 (119.352 mph), securing prime garage space and pit selections for the No. 11 team that also includes drivers Franck Perera and Rik Breukers.

“It’s good to be back at Daytona," Bortolotti said. “We are not a regular team for the season, but for me, it’s already the third time coming back to Daytona, so it’s always good to be here. For the team, it’s the second time after the race we did last year. We’ve got a good garage spot for the race. Let’s see what kind of benefit we will have out of it.

“Obviously, the race is in two-and-a-half, three weeks’ time, so we’ve got a lot of work in front of us. Hopefully, we can keep this up and go for a strong result."

The top 18 cars in GTD – all but one of the 19 to participate in the qualifying session – were covered by less than one second.