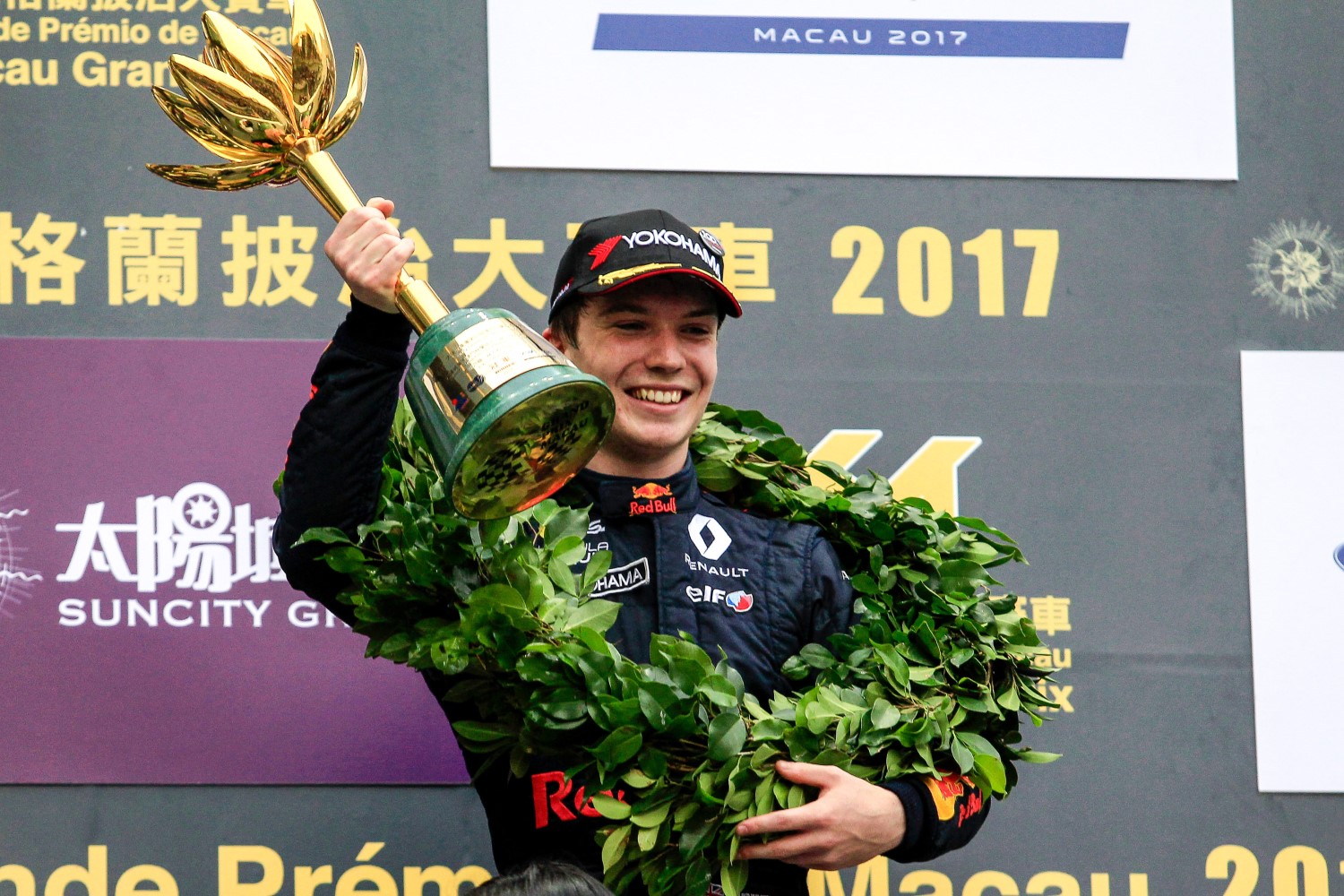 Red Bull junior driver Daniel Ticktum claimed victory at the Macau Grand Prix, pulling off a four-abreast move on Lando Norris and Maximilian Gunther simultaneously into Lisboa with two laps remaining, and then leaders Sergio Sette Camara and Ferdinand Habsburg crashed at the final turn on the final lap and Ticktum was through for the win.

At the line Ticktum was just 0.568 seconds in front of Norris (See video of finish below).

“Some people might say that the win is a bit lucky but I’ve got to say that I deserved it because of my pace through the weekend," asserted Ticktum. “Then there was that overtake, that was the move that did it for me."

A change of fortune

Until the race, the cards had fallen against the Motopark driver who was robbed of a great grid position when the second qualifying session was red flagged while he was on a very quick lap leaving him 6th on the grid for the qualifying race. From there he started picking off places only to have the tyros go away and he slipped back to eighth but recorded the fastest lap of the race.

So that was where he started the 15 lap final. “The start in the qualifying race was pretty poor, I’d only done a couple of practice starts, In the final I did a bit better, not great but I held onto my place. There were a couple of full course yellows and restarts and I took opportunities where I could but there weren’t many."

The big one
“I got up to fifth but I coming to the end of the race I knew that I was going to have to do something special if I was going to get a decent result. I was watching Lando as he was going after Max and just put myself in the position to make something of it if I could. I did a similar move I’m pretty sure last year and I knew what it would take."

“I’m pretty confident on the brakes and I have a marker for where my last place to brake is and I kept that in the peripheral as I went alongside. I braked, if I’d had to go any deeper I would have been in trouble but it was enough."

The last one
“I thought, OK, the podium is not bad but then I couldn’t believe the last corner, one into the wall going in and then as I came out there was another, I just couldn’t believe it as I crossed the line, what a race."

“It’s been an incredible event, a great race, great people and I have to thank everyone who gave me this opportunity, everyone including my dad, Dr Marko and the Motopark team who did a fantastic job of adapting the car after the qualifying race which wasn’t disastrous but we needed a better car for today and the guys produced it."

How the race unfolded
The race began with Joel Eriksson slipstreaming poleman Callum Ilott on the run to Lisboa to take an early lead, but a full-course yellow was called on lap two after Marino Sato crashed at the kink before Fishermen’s Bend.

Ticktum started from eighth position on the grid and gained one spot off the line.

The green flags waved as the field were on the long straight to Lisboa, and Ilott and Eriksson collided giving Ilott a flat tire and handing the lead to Sette Camara, as Ticktum moved into fifth.

After the subsequent Safety Car period, due to Eriksson's stranded car, and a couple more laps featuring yellow flags, the race heated up during the closing stages.

Habsburg slipstreamed second-placed Maximilian Gunther, completing the move before Lisboa, as he set off in pursuit of Sette Camara, who had opened an advantage up front.

As Habsburg closed on Sergio Sette Camara up front, Gunther and Norris scrapped for third, though their duel became a three-way fight courtesy of Ticktum.

Gunther and Norris battled but Ticktum made it three-wide on the approach to Lisboa and seized the outside line, out-braking his rivals before sweeping around them, and into third spot.

Up front, Habsburg reeled in Sette Camara and the pair scrapped for the lead as they began the 15th and final lap, with the Brazilian hanging on after retaining the inside line on the run to Lisboa.

Habsburg remained glued to the rear of his Motopark rival through the technical middle sector of the lap, and his speed forced Sette Camara to defend the inside line into Fisherman's Bend.

Habsburg consequently carried greater speed through the right-hander and, though Sette Camara held the inside line along the short straight, Carlin's Habsburg inched ahead on the entry to the final corner.

However, Habsburg carried too much speed into the corner and hit the outside wall, while behind him, Sette Camara's compromised line resulted in him also understeering into the barriers.

Ticktum thus picked his way through the debris to collect a dramatic victory, ahead of compatriot Norris, while Ralf Aron stayed out of trouble and made gains to record a podium finish, having started from 13th place.

Habsburg crawled his damage car across the line in fourth position, as Gunther took fifth, in front of Pedro Piquet and Sacha Fenestraz.