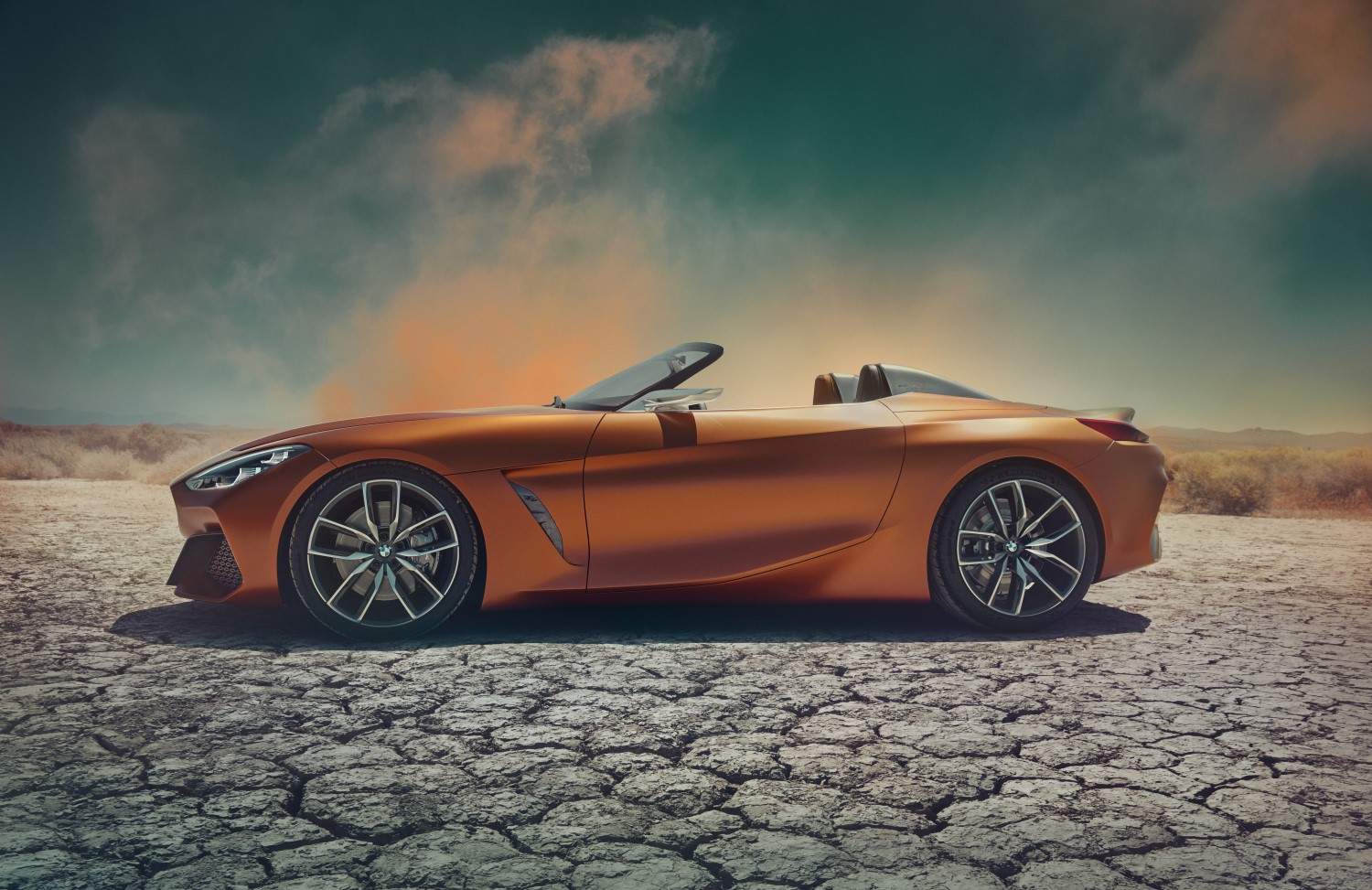 Pebble Beach, CA – BMW today unveiled two concept vehicles during its annual Monterey Car Week Press Conference at the Lodge at Pebble Beach Concours d’Elegance Reviewing Stand. The first concept car unveiled is the BMW Concept 8 Series that was first shown at the Concorso d’Eleganza Villa d’Este in May. The second is the World Premiere of the BMW Concept Z4. Both concepts are previews of the series production cars set to be revealed over the course of next year.

The BMW Concept Z4 Roadster is sporty and progressive BMW design study encapsulating the BMW Group’s vision of a modern roadster. According to Adrian van Hooydonk, Senior Vice President BMW Group Design, “The concept expresses the new BMW design language from all perspectives and in all details. From the dynamic-looking front to the striking flanks to the clean-cut tail end: a few lines and the subtle interplay between surfaces are enough to generate a sense of power and emotion.

The BMW Concept Z4 Roadster adopts classical roadster design cues, such as a long wheelbase, a low-slung, stretched silhouette and a compact rear end, wraps them in a fresh, confident package and enriches them with the contemporary BMW design language. A shorter bonnet and crisp overhangs ensure the driver sits closer to the center of the car than in previous BMW roadsters. This gives the new proportions a focused, sporty and agile feel. The outline of the car follows a distinct wedge shape, which fills the BMW Concept Z4 with dynamism before it even pulls away. The large domes stretching out rearwards from the cabin elegantly integrate the function of rollover bars and provide a sporting conclusion to the low-to-the-road silhouette at the rear.

After an eighteen year hiatus, the ‘8 Series’ name returns to the BMW portfolio with the BMW Concept 8 Series that serves as a preview of a forthcoming BMW model – the new BMW 8 Series Coupe, slated for launch in 2018. “The number 8 and cars like the Z8 Roadster and i8 have represented the pinnacle of sports performance and exclusivity at BMW," explains Chairman of the Board of Management of BMW AG Harald KrÃ¼ger. “The forthcoming BMW 8 Series Coupe will demonstrate that razor-sharp dynamics and modern luxury can go hand-in-hand. This will be the next model in the expansion of our luxury-car offering and will raise the benchmark for coupes in the segment. In the process, we will strengthen our claim to leadership in the luxury class."

The BMW Concept 8 Series is immediately recognizable as a BMW, but also displays new design ideas and form-building techniques. “The design of the BMW Concept 8 Series provides a fresh interpretation of iconic BMW styling cues," adds van Hooydonk. “And it also showcases a new approach to the use of forms which is reflected particularly prominently in the car’s surfacing. A handful of crisp lines mark out clear surfaces, and the car’s volumes are powerfully sculpted. Together, these elements make a forceful statement and create a model brimming with character. In short, this is a driver’s car."

In addition to the various concours d’elegance activities, BMW will once again run two classic race cars in the Rolex Monterey Motorsports Reunion this year driven by notable drivers. The famous #25 1975 BMW 3.0 CSL IMSA Group 4 will, one last time, be driven by retiring BMW of North America President Ludwig Willisch as a retirement gift from BMW. Meanwhile the #21 1972 ALPINA BMW 2002ti will be raced by none other than Adrian van Hooydonk, BMW Group Head of Design. Both cars will race in Group 4A on Saturday August 19th.

The Rolex Monterey Motorsports Reunion this year celebrates the 60th anniversary of Laguna Seca raceway and BMW is honored to be displaying its #42 BMW V12 LMR for the 60 years display tent. In the seven races in which it competed during 1999 season, the BMW V12 LMR dominated with 10 podiums and five victories including the1999 24 Hours of Le Mans, the 1999 12 Hours of Sebring and the Monterey Sports Car Championship at Laguna Seca. In total, there are only four V12 LMRs in existence of which one was the basis for the fifteenth BMW Art Car created by American Artist Jenny Holzer.