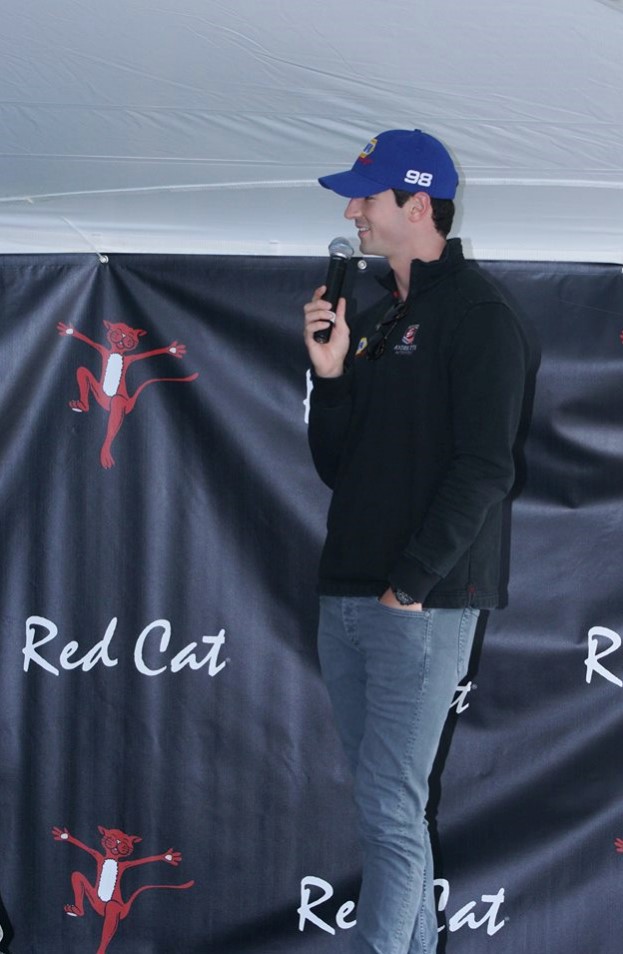 Sunday morning, when I saw the media availability schedule at Watkins Glen, to my complete and total surprise was the name Alexander Rossi. The 2016 Indianapolis 500 winner was at the track promoting the upcoming INDYCAR Grand Prix at The Glen on Labor Day Weekend and visiting with fellow NAPA – sponsored driver Chase Elliott.

As regular readers know, we've referenced on these pages Rossi's emergence in 2017, my Mid – Ohio Postscript being one such example. While the four Penske cars, Scott Dixon and Graham Rahal seem to be a notch above Andretti Autosport at the moment, we have noted how Rossi has quietly begun to vie with longtime Andretti Autosport ace Ryan Hunter – Reay for preeminence within the team.

Anyway upon seeing Rossi would be available to the media, I sent AR1 President Mark Cipolloni a text sarcastically noting, "this should be thrilling."

Joking aside, I was certainly not expecting to come away with a 1600+ word feature article.

Remember, last season Rossi signed to run IndyCar just a few weeks before the season opener at St. Petersburg, after chasing a Formula One ride most of that offseason. And due to the fact Rossi had long stated F1 was his ultimate goal (he had previously stated IndyCar was of no interest to him), the arrangement in IndyCar seemed to be something of an awkward one, which many believed would be short lived. Rossi had stayed on as a test driver for Manor/Marussia during 2016, with his sights still firmly set on F1. The perception – or reality – that he longed to be elsewhere was not lost on many fans.

This uncomfortable dynamic was also exacerbated by Rossi himself. I say that not as a criticism of the 25 – year – old Nevada City, California native, rather as a commentary. Fair or unfair, Rossi's naturally shy demeanor and unwillingness to be forthcoming were perceived in some circles as the then – rookie being cold and aloof. I, for example, witnessed some of the short, uninformative answers he provided other members of the media, and decided for myself, there was little reason to make any effort with him.

And if you want to go a step further, all of the above was not mollified but arguably exacerbated by his surprise Indy win. Having suddenly won the most – anticipated IndyCar race in years, the naturally reticent Rossi was thrust into the spotlight and asked to be the face of a sport that wasn't on his radar mere months before. Further, with IndyCar stalwarts like Josef Newgarden, Carlos Munoz, Tony Kanaan coming painfully close to victory, a driver who had been in IndyCar for all of five hot minutes, who was openly longing to be elsewhere winning the sport's biggest race in decades, didn't sit well with many of the diehards.

In short, due to a host of very unique factors, 2016 was a year of very sudden changes for Rossi. Oddly, one could argue his success made things not easier, but in a sense more difficult. And the adjustment to these changes showed, resulting – again whether fair or unfair – in a lukewarm reception by fans and media, meant Rossi didn't let too many people in.

[adinserter name="GOOGLE AD"]But given the luxury of hindsight, it's almost as if 2016 was going to force Alexander Rossi to be an IndyCar driver – whether he wanted it to, or not. Things dried up on the F1 front, and opportunity that frankly no one could have reasonably foreseen came about in IndyCar.

Fast forward to Sunday, and there was not the slightest hint of such awkwardness during his meeting with the media. Much to my surprise, a previously shy and reserved Rossi was friendly and expansive when it came to fielding questions from the media. At Watkins Glen Sunday as an ambassador for IndyCar of sorts was something Rossi seemed to be not shying away from, rather, embracing it.

One story he told referenced him taking the checkered flag at Indy. Because the No. 98 Napa Honda had run out of fuel coming out of turn 4 the engine shut off before Rossi coasted across the finish line. With the engine shut off, Rossi could hear the roar of the crowd in a way that he was not able to hear during the race. So not only was winning the 100th Indianapolis 500 special, Rossi noted that the victory lap was extra unique given the circumstances, which resulted in him hearing the crowd in a way most winners do not.

I also asked during the presser about his future in IndyCar, and such questions can be tricky. For one, you have to respect the position of the driver, which due to contractual obligations means they most often cannot answer such questions directly. Therefore, you cannot come across too strong and phrase the question in a manner that pins the driver down, which this not only serves to tick him or her off but also results in no meaningful answer. At the same time, you can't merely ask some cream puff question that doesn't demand a substantive answer.

My tactic was to ask if the perception Rossi was attached to Honda was true, with the subtext being whether it would be the manufacturer or team that determined his future.

"The short answer is both," was Rossi's quick answer, and the realization that my line of questioning probably provided too much of an out. He did go on to say that he was appreciative of Honda's support and that he had a very good relationship with Honda, HPD, etc. The sense I got (again, just a sense and nothing firm) is: all things being equal he will be with a Honda team going forward; at the same time, he wouldn't blow off a phone call from Roger Penske if and when that time came.

I also got the chance to speak with the driver of the No. 98 NAPA Auto Parts/Curb Honda one – on – one for about 5 – 10 minutes following his presser.

"Honestly, it's the car," said a characteristically succinct Rossi, when I asked why he has adapted so well to oval tracks during his two seasons in IndyCar. Remember not only did Rossi win the Indy 500 in his first try but he led 23 laps in this year's race, and was in contention for the win before a fuel issue put him back in the pack, before he came back to finish 7th. He went on to note Andretti Autosport's record at tracks such as Iowa and Indianapolis that preceded him, saying that he has merely been the beneficiary of a very strong team. He also noted oddly, that one track he would really like to race was interestingly, Chicagoland.

Speaking of ovals, I asked Rossi about this year's Texas race and the 'pack racing' we saw. Rossi qualified third at Texas, but a lap – 36 accident resulted in a 22nd – place finish. Only six cars managed to finish on the lead lap in a crash – filled race.

While not being critical, "eye – opening" is how he described Texas. And what made it eye – opening according to Rossi wasn't the racing as much as it was the element of surprise. Rossi noted that the teams tested and practiced during the day in conditions that did not at all resemble the night race. Also, in recent years, Firestone has brought a tire that degrades at Texas, which as Rossi says breaks up the pack after 10 laps or so. However, the combination of the repaved surface and the cooler night temperatures meant that the tire degradation was not significant enough to create separation.

Although, he did not compete in the famed Fontana race two years ago, I asked Rossi whether the element of surprise had any comparisons to Fontana, in which cooler temperatures resulted in a race different from what was expected. He noted that the difference between Texas and Fontana was the number of grooves. Whereas, massive risk was needed to open the second lane at Texas, Fontana, with its five legitimate racing lanes, allows a driver much more freedom.

Another thing complicating matters was what Rossi described as "different agendas," amongst the drivers. While not passing judgment on the value of one agenda relative to another, Rossi noted the fact those agendas being in close such proximity at high speeds, helps explain the heavy amount of carbon fiber we saw in Texas.

I also asked if the new car would change the racing we saw at places like Texas. Rossi was unsure of that pointing to the numerous variables that go into a track, car, weather, tires, etc. And regarding the new car, Rossi also pointed out that while it will move around more than the current car, he wanted to debunk the perception that the heavy downforce makes the current car easy to drive. With incredible cornering speeds, Rossi says the current version of the DW12 takes a commitment level in the corners people do not understand.

Essentially, he described the challenge between the cars as not being a matter of harder or easier, rather "different."

The Nevada City, CA native also interestingly noted that he was happier with his second IndyCar season, despite not visiting victory lane. "Much more consistent," is how Rossi describes 2017 relative to 2016. While the breakthrough win hasn't necessarily come yet in 2017, a seemingly process – oriented Rossi has much more of a grasp on where the team stands and what needs to be done to take that next step.

"It's the road courses," said Rossi, again very succinctly, about where Andretti Autosport needs to make up the gap to the top teams.

Overall, I greatly enjoyed my time with Rossi, and found him very thoughtful. As we saw in his rookie season, he is naturally direct, but such directness should not be mistaken as being cold and aloof. It is anything, refreshing.

From suddenly finding himself in IndyCar then finding himself in victory lane for a historic installment of the world's most iconic race to now searching for the performance to become a regular winner and contender, Alexander Rossi's racing journey over the past 18 months has been far from linear. However, a driver who seemed so uncomfortable in his new surroundings a year ago, has certainly seemed to come of age in 2017. Further, if recent performance is any indication, a coming of age behind the wheel seems very much in progress.

And you have to think we've yet to see the best from Alexander Rossi.