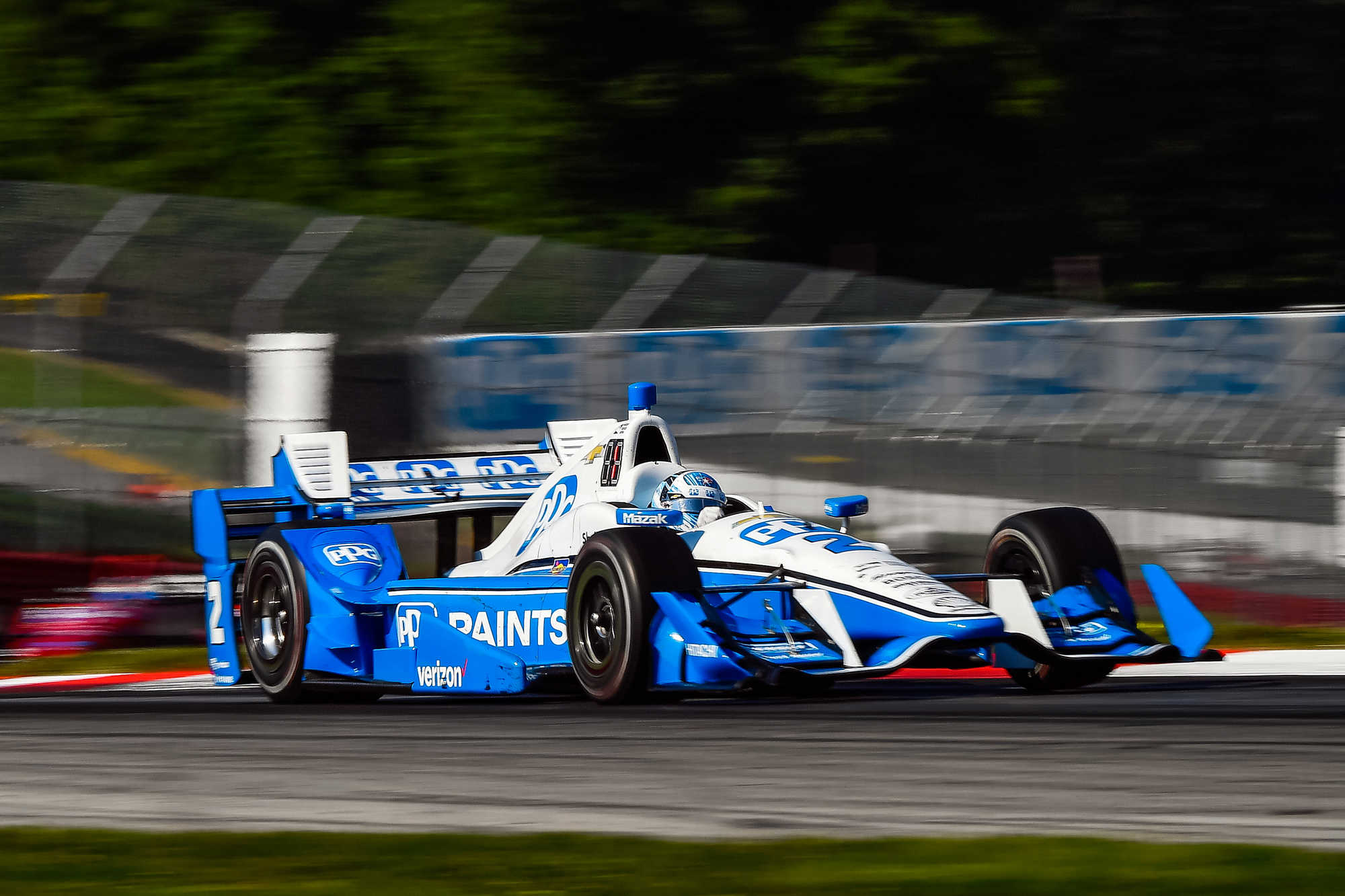 On the one hand, I can sit here and wax poetic about Newgarden’s very impressive drive to victory in Sunday’s Honda Indy 200 at Mid-Ohio. The pass on teammate Will Power, pulling away from the field, not overdriving the car when it wasn’t necessary, and the outstanding work by the No. 2 team on pit road (which stands in sharp contrast to some of the shoddy pit service Newgarden has received in prior years), there was no question: Newgarden and Team Penske were aces Sunday.

But you saw all of that. Plus, what I’ll remember most about Newgarden and this year’s Mid-Ohio race is the post-race press conference in what we’ll politely refer to as Mid-Ohio’s cozy and rustic media center.

As usual there were some pointless, awkward, ‘I’m asking a question for the sake of asking a question’ questions. What I found different from typical press conferences was the manner in which the questions were received.

[adinserter name="GOOGLE AD"]Newgarden was comfortable and humorous, yet not unprofessional; interesting, yet not controversial; he had just finished kicking everyone’s ass and was rightfully confident, but not the least bit arrogant; polite and relatable; without any hint of phoniness.

He talked about his sponsor but not in the standard name-dropping or listing way most drivers do. Rather, he pointed out that everyone wanted to drive the sleek, super-fast PPG car, which of course catered perfectly to the brand of the automotive refinish company.

If one of those pointless or repetitive questions was asked Newgarden didn’t pause clumsily, or look away with an awkward smirk. No, the Verizon IndyCar Series championship leader would simply pivot the question to something still relevant yet interesting.

And if you want to say I am slurping up to Newgarden, go right ahead. Sunday, I could not have been more impressed on or off the track with Newgarden. What I witnessed was the all-American kid from Hendersonville, TN, who worked his worked his way to the top of the sport without the sugar daddy some drivers enjoy, has now, in partnership with the sport’s most storied team, fully arrived. Yes, Newgarden was Penske Perfect in a way, I didn’t think one could be Penske Perfect.

I hate the fact that I have to write these ‘looking for the Savior,’ type stories. But the reality with 0.13 live TV ratings, is IndyCar desperately needs good stories the public at-large can potentially wrap themselves around. And if that means a savior, well then, so be it.

While a lot of drivers do the P.R./media stuff because they have to (this is not a criticism, some people are simply not as inclined to the spotlight as other you get the sense, Newgarden and some others like James Hinchcliffe and Graham Rahal actually like it.

Simply put, if the series is to have any hope of growing, Newgarden is currently the best hope. The story of his rise to the top needs to be told, and his personality put in front the biggest audience the series can possibly find. Whether it’s Dancing with the Stars, a cooking show, whatever: IndyCar has a potential American hero with all the attributes one could want. They need to utilize him, and dare I say, HOPE he wins this year’s championship.

It was a decent if not spectacular weekend for Newgarden’s teammate Helio Castroneves, who started fifth and finished seventh. The Brazilian remains very much alive in the championship battle, a mere 9 points behind Newgarden.

Of course, the big focus these days with the three-time Indianapolis 500 winner centers on his future in IndyCar. While a wrench was thrown in the speculation regarding Castroneves’ future, with Racer.com reporting he has possibly spoken with Chip Ganassi about a 2018 IndyCar ride (given the rivalry between the two teams, this would be a story), it is expected that Castroneves will pilot Team Penske’s new Honda IMSA effort in 2018.

The Ganassi revelation by Racer could explain the delay in confirming Castroneves’ 2018 plans is coming from Castroneves and not the team. The only thing I’ll say is that if/when the decision is made that Castroneves is driving sports cars next year, do everyone a favor and announce it. The Brazilian has had his critics over the years, but is unquestionably an IndyCar great. He and his fans (and he has a fair amount of them) deserve the opportunity to say a proper goodbye during these remaining four races, and not some random mid-week announcement sometime in October.

Listen, I think the world of Ryan Hunter-Reay. The 2012 series champion seemingly has an ability to almost will himself to win, in a way I’ve seen with few drivers. Of course, it’s been a difficult past few years for RHR, as he is now approaching the two-year anniversary of his last win at Pocono in 2015.

Sunday, Hunter-Reay found himself on the short end on contact in turn 4 with teammate Alexander Rossi. He was none too happy with Rossi, and reportedly team owner Michael Andretti made the 2016 Indianapolis 500 winner apologize to his veteran teammate.

In fairness to Andretti, I didn’t read the report linked above as him saying Rossi was in the wrong, or catering to Hunter-Reay’s moodiness as many seemed to believe. Rather, it seemed Andretti saw the contact as something of a racing deal and was trying to keep things copacetic within a team where the dynamic seems somewhat tenuous at the moment.

Now, there could be many reasons for this, but one might be that Rossi is seriously starting to challenge Hunter-Reay. Remember, since Tony Kanaan left Andretti Autosport following the 2010 season, RHR has been – save for an impressive 2013 by James Hinchcliffe – mostly unchallenged with the AA stable. However, Rossi has finished ahead of Hunter-Reay in 6 of the last 8, and out-qualified him in 4 of the last 5. While it’s maybe gone somewhat overlooked largely because the team hasn’t been contending for wins, I can assure you it has not gone overlooked by RHR.

This isn’t a criticism. Hunter-Reay wouldn’t have the record he does if such things didn’t matter to him. But with the team currently unable to consistently challenge Penske, Rahal and Dixon, right now, the most interesting fight for Andretti Autosport exists inside and not outside the building.

Another thing about AA…

I’ve said this for a few years and been shot down regularly by those who insist the team’s issues exist on a technical level. I don’t dispute this claim, and clearly the aero kit era has not been as kind to Andretti Autosport as it has others. But I also know they haven’t been the same since James Hinchcliffe left the following the 2014 season. While I’m not saying Hinchcliffe is Senna, I believe he filled a key role within the team during the years he was there (keep in mind he replaced the brooding Danica Patrick). The likable Canadian was and is good enough to win a race on his day, yet also has the personality to bring a certain levity to a team when things didn’t go as planned. Whatever sterling qualities Marco Andretti, Rossi and RHR do possess, I don’t think anyone would describe either as the ‘sun will come out tomorrow’ type. While Takuma Sato seems to take disappointment more in stride than his teammates, he is not the ‘make the entire room laugh out loud on a moment’s notice’ type Hinchcliffe is.

Anyway, I suppose the team’s inability to regularly challenge Dixon, Rahal and Penske could be technical. Also, happiness tends to be a function of winning, more so than the other way around. That said, I still wonder if Andretti Autosport misses James Hinchcliffe more than they or anyone realizes. And if I’m Michael Andretti (not that he listens to me even a little bit), and I plan to bring Marco and RHR back, finding someone who can help the chemistry within the building is something I consider seriously in a driver hire for 2018 and beyond.

If you followed our updates from the weekend and/or watched the video I did with Mark Cipolloni this week you know that the 2018 Indy car has been met with unanimous approval. While we can talk about why the series didn’t go to a sleeker look earlier, credit should be given to Mark Miles, Jay Frye and the gang for not doubling-down on the failed aero kit concept. With a lot invested in the kits, it might have been easy for the series to be stubborn about the concept and surge forward. Give them credit for acknowledging their mistake – albeit not directly – and adopting a better solution going forward.

I don’t think anyone ever needed a mistake-free 14th place finish more than Mikhail Aleshin Sunday.

Conor Daly’s 10th place finish was much needed as well.

There was a lot of talk about the ‘closing the pits’ rule this weekend. Drivers and teams seem to be in universal agreement that something needs to change. Look for a change this offseason.

I had the pleasure of meeting Art Wilmes, the founder of Rising Star Racing Sunday morning. Look for an article on Wilmes and what he is trying to do with Rising Star soon. I think you will find it enjoyable.