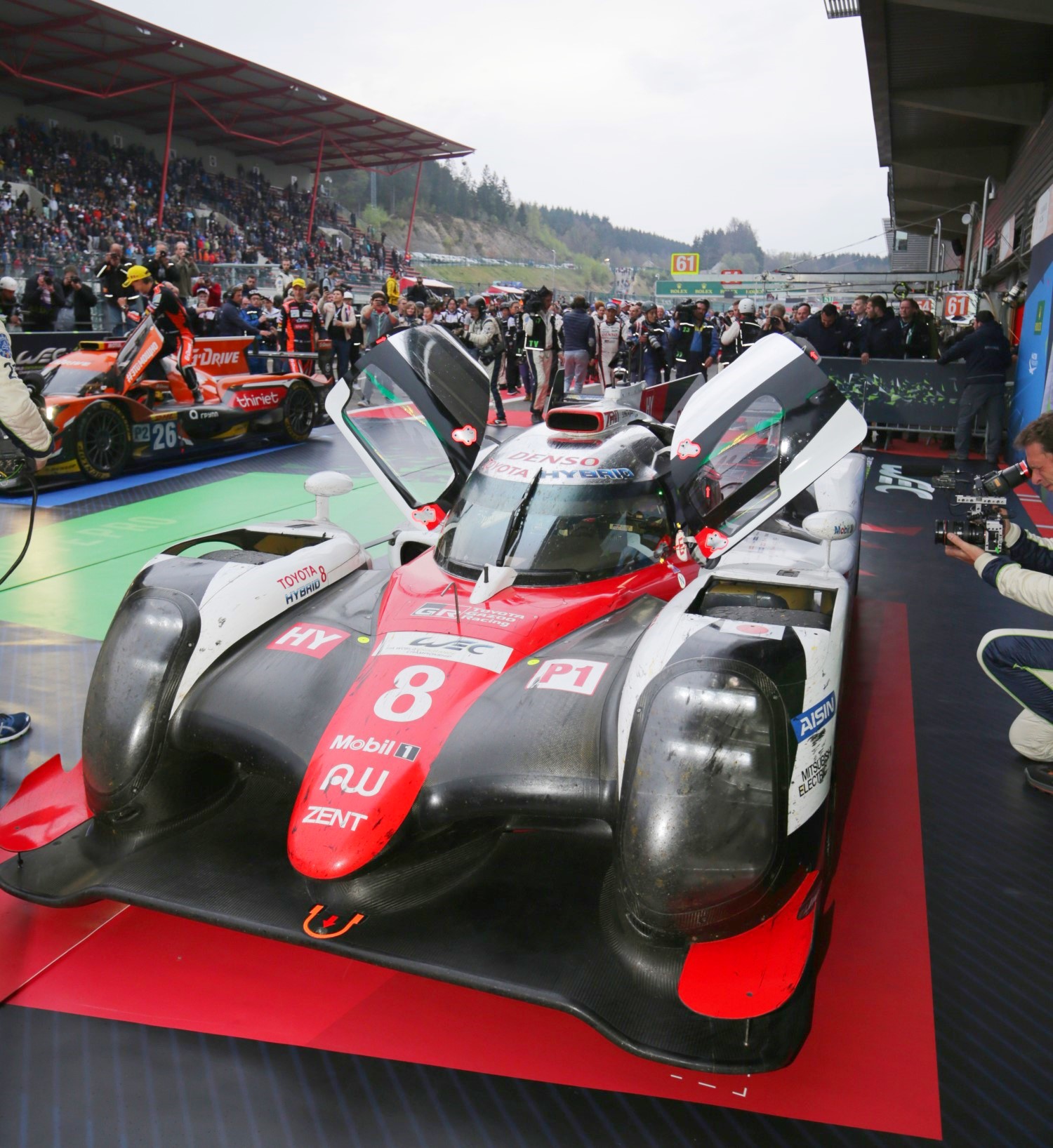 TOYOTA GAZOO Racing took its second consecutive victory of the 2017 FIA World Endurance Championship (WEC) season with a one-two in the 6 Hours of Spa-Francorchamps.

Silverstone winners Sebastien Buemi, Anthony Davidson and Kazuki Nakajima, in the #8 TS050 HYBRID, again took top step of the podium to extend their lead in the drivers’ World Championship to 17 points.

In a dramatic race, the #7 of Mike Conway and Kamui Kobayashi finished just 1.992secs behind in second place, for the team’s first one-two since Shanghai in 2014. That moves TOYOTA into the lead of the manufacturers’ World Championship, by 8.5 points from Porsche.

The #9 crew of Stephane Sarrazin, Yuji Kunimoto and Nicolas Lapierre, competing together for the first time, completed a trouble-free race to finish fifth and gather valuable experience with the low-downforce TS050 HYBRID.

Right from the start, the TOYOTAs were challenging for the win, with first Sebastien then Mike putting the pole-position #1 Porsche under pressure. On the 10th lap, Mike took the lead, while Sebastien took second three laps later.

[adinserter name="GOOGLE AD"]At the first driver changes, Yuji took over the #9 in fifth for his first-ever racing laps at Spa. He showed consistency and maturity throughout his two stints to navigate safely through the lapped traffic; a key stage in his acclimatization to WEC racing.

Kamui was consistently building a lead for the #7 as the race passed the halfway point, with Anthony in the #8 in second. But the race soon took a significant turn with two full course yellow periods.

The #7 was unlucky to be already in the pits on both occasions. Other cars pitted after the yellow flags and therefore conceded far less time due to the 80km/h limit around the lap. Mike, whose stops were made when the competitors were driving at racing speeds, lost around one minute.

Kazuki initially took the lead during the first full course yellow then extended it significantly during the second. Mike on the other hand found himself in a fight with the #2 Porsche, dropping to third.

A further twist saw the #2 Porsche lose time due to accident repairs meaning Sebastien held a half-minute lead going into the final hour over Kamui, now second in the #7.

Kamui closed the gap but held position in the last laps, crossing the line just behind Sebastien, who took TOYOTA’s 13th win since its WEC debut in 2012. Nicolas completed a clean run for the #9 car, taking the flag in fifth, two laps behind.

TOYOTA GAZOO Racing now makes the short journey back to Cologne to accelerate preparations for the Le Mans 24 Hours on 17-18 June when the team expects a challenging and close fight with Porsche. Before that, all teams participate in the official Le Mans test day on 4 June.

Toshio Sato, Team President: “This was a dramatic race; I hope the fans enjoyed it. We are delighted with the result after another intense fight with Porsche. The #7 was unlucky with the two full course yellows. These things can happen in endurance racing but it’s really frustrating for Mike, Kamui and the car crew. They had the quickest car today in the race and didn’t make any mistakes. Well done to the #8 car; they never gave up and got their reward. It’s also been a very productive weekend from a technical point of view; having the chance to get data on the low-downforce package with the #9 is helpful for our Le Mans preparations. Le Mans is our big target and we will now make the final push to be ready."

Mike Conway (TS050 HYBRID #7): “I’m a bit disappointed but it’s a great team result. The car has been very good all weekend and the team did a fantastic job. In the first part of the race we were really quick and built up a nice lead but we got the two full course yellows at exactly the wrong times. That’s racing sometimes. We have to take the positives from this weekend and carry that into Le Mans."

Kamui Kobayashi (TS050 HYBRID #7): “Our car was really fast today; we just lost the race due to bad luck. At the end I caught up with Sebastien but in the last laps it’s not fair to attack when we are running one-two so I just followed him. It’s nice for the team to score maximum points from the race, especially in one of our home races; it was a good effort from everyone."

Sebastien Buemi (TS050 HYBRID #8): “Today we were not the fastest TOYOTA; car #7 deserved the win more. They lost so much time with the full course yellows. Our car didn’t quite have the pace so it’s nice in a way to win without actually being the quickest; maybe it’s a good sign. Last year we were leading by a lap when we had a technical problem so fortune has really turned around for our car here."

Anthony Davidson (TS050 HYBRID #8): “We certainly had some luck today because those two full course yellows gave us around a minute in total on the #7 car. Mike and Kamui were blindingly quick from the start of the weekend and we didn’t have an answer, so they deserved the win. But for the team it’s a fantastic result and great preparation for Le Mans."

Kazuki Nakajima (TS050 HYBRID #8): “It was a difficult race on our car and I have mixed feelings to be honest. I’m happy to be on the middle step of the podium but car #7 was really unlucky. In the end it was a great result for the team and it’s good to know that our car is getting a bit of luck this year after having none at all in 2016. Now we head to Le Mans with a good feeling."

Stephane Sarrazin (TS050 HYBRID #9): “It was a difficult race for us in the low-downforce car due to the tire degradation. I enjoyed the race; I pushed and the pace was pretty good. It was important for Yuji to experience a WEC race for the first time and it was important to finish. So all in all it’s a good weekend for us and the low-downforce car is a good base; it has big potential for Le Mans."

Yuji Kunimoto (TS050 HYBRID #9): “I enjoyed my first race weekend in WEC, and my first race here at Spa. There is a lot to learn and it was good to do a lot of laps today to experience things like traffic and tire management. The result was not the main target today; it was an important step for us all to prepare for Le Mans so I am pretty happy with it."

Nicolas Lapierre (TS050 HYBRID #9): “It’s a great day for the team and a great result. Unfortunately on our car we were lacking some downforce, which is normal for the Le Mans-spec car, but it meant we had a lot of tire degradation so we couldn’t fight. It was a good learning for Le Mans and the most important was to finish the race and from that aspect it’s been a positive weekend."