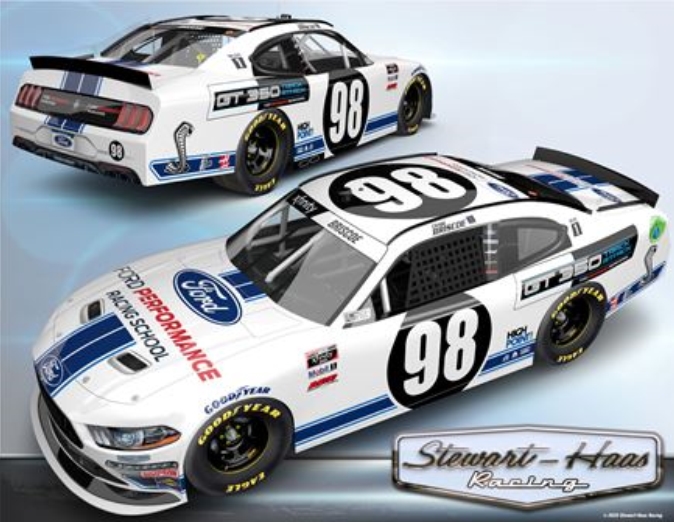 Ford Performance Racing School has partnered with Stewart-Haas Racing (SHR) to become a primary sponsor of its No. 98 NASCAR Xfinity Series entry with driver Chase Briscoe.

The No. 98 Ford Performance Racing School Ford Mustang will debut Feb. 21-22 at Las Vegas Motor Speedway and will be seen 15 more times as Briscoe competes for the Xfinity Series championship after winning rookie-of-the-year honors in 2019. The 25-year-old driver from Mitchell, Indiana, is a two-time Xfinity Series race winner and the 2016 ARCA Racing Series champion.

“The word ‘performance’ is more than just a name when it comes to Ford," said Briscoe, who drives a magnetic gray Ford F-150 Raptor when he’s not wheeling his No. 98 Ford Mustang in the Xfinity Series. “The success Ford has earned on the racetrack has gone directly into the development of its road cars, and its line of Ford Performance vehicles is the best of the best. The Ford Performance Racing School is an extension of that, providing Ford Performance vehicle owners the knowledge and skills to get the most from their car, truck or SUV."

Ford Performance Racing School is the only school to wear the Ford oval, and Ford is the only full-line vehicle manufacturer to offer product-focused experiential driving programs exclusively to the owners of its complete line of performance vehicles, from cars to trucks to SUVs.

“When you have a racing school featuring the latest Ford Mustang GTs, there’s no better way to market our performance driving instruction than with a professional driver who races Mustangs," said Dan McKeever, president, Ford Performance Racing School. “Chase Briscoe speaks the same language as our customers and demonstrates the capabilities of his racecar in every race he enters. His knowledge of how to operate his Ford Mustang didn’t happen overnight. It came with instruction and repetition, giving him confidence and understanding of his car’s features. That’s what we do for attendees of the Ford Performance Racing School, whether it’s with a new Ford Mustang on the racetrack or a Ford F-150 Raptor on the trails."

Established in 2006, Ford Performance Racing School operates out of two venues – a dedicated off-road complex in Tooele, Utah, for the Raptor Assault owner program and an at-track operation at Charlotte (N.C.) Motor Speedway. There, a fleet of Ford Mustang GTs modified with Ford Performance Parts is used for the high-performance driving school, while Fiesta STs, Mustang Shelby GT350s and GT500s are available for their respective track-based owner programs. Each regional facility has a satellite operation featuring Ford Performance SUVs, with locations in Park City, Utah, and Asheville, North Carolina.