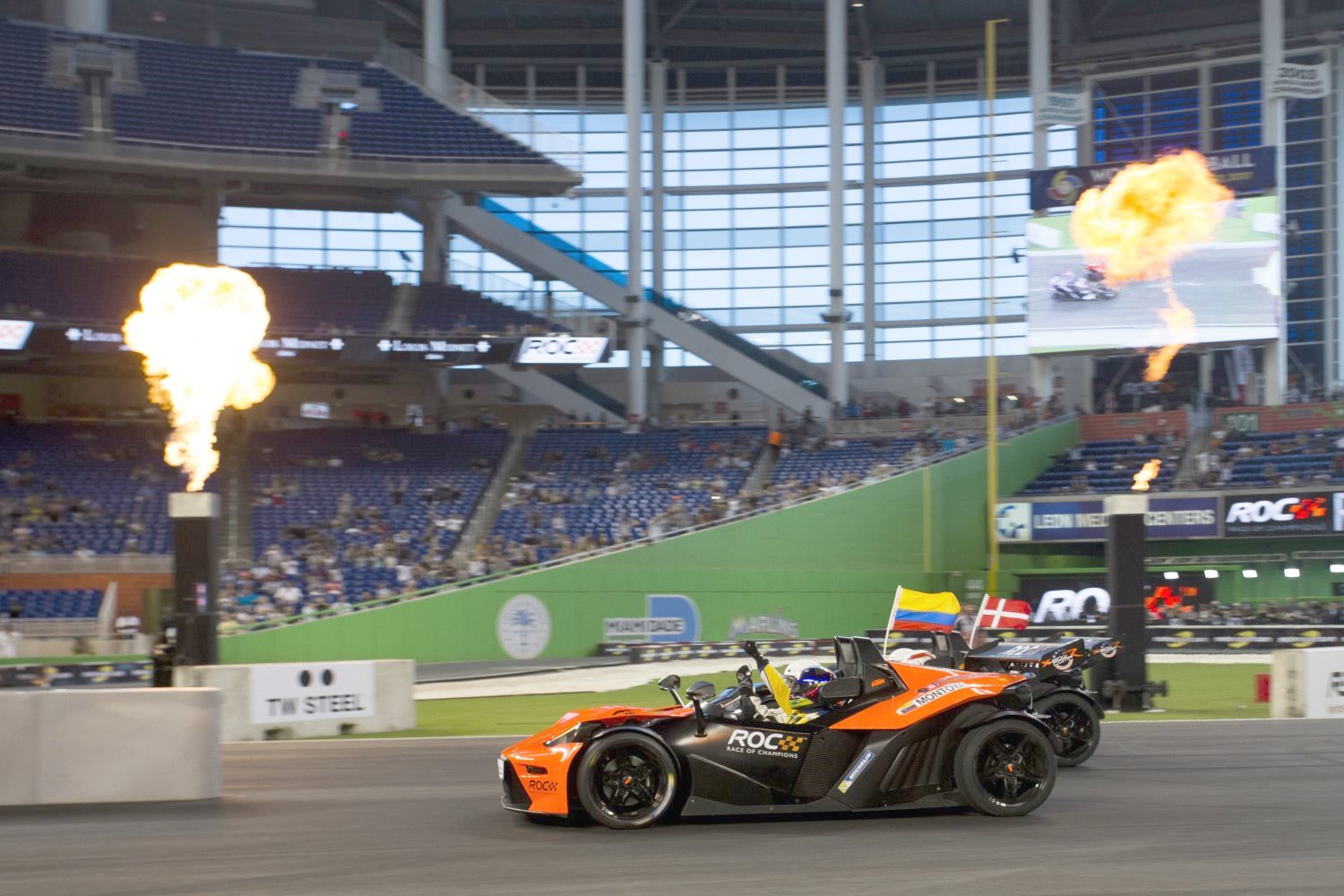 IndyCar driver and 2015 Indy 500 winner Juan Montoya gave the locals something to cheer about by winning the 2017 Race of Champions in Miami. Montoya is from Miami and he narrowly beat Tom Kristensen in the best out of three races in the finals. But to get to the finals both drivers had to defeat the best drivers in the world from Formula 1, NASCAR, World Rally, RallyCross, WEC and IndyCar. In the end IndyCar had something to cheer about as one of their drivers proved to be the best of the best.

ROC organizers paved a crossover course within the Miami Marlins baseball park and turned more than 20 drivers from Formula One, NASCAR, IndyCar WEC and World Rally loose in a variety of cars.

The American contingent included NASCAR champions Kurt Busch and Kyle Busch, Indianapolis 500 winners Ryan Hunter-Reay and Alexander Rossi and rallycross stars Scott Speed and Travis Pastrana, but none of them made it to the finals.

[adinserter name="GOOGLE AD"]"It's very difficult to jump in each car and try to get the most out of it," Hunter-Reay said. "Each one is different — left-foot or right-foot braking, sequential gearbox, paddle shift or H-pattern. Everything is always different, and you're always kind of naturally reacting to it.

"It's a unique situation, where everybody is out of their comfort zone, and it's fun to see everyone like that."

Today’s individual Race Of Champions pitted many of motor sport’s biggest names in identical cars on a brand new figure-of-eight track. On a hot and sunny day in Miami, the best-of-three Grand Final boiled down to a battle between two of the biggest stars of world motor sport. But in the end ROC debutant Montoya saw off ‘Mr Le Mans’ Tom Kristensen in two straight heats to become Champion of Champions in front of 15,000 race fans in Miami.

Kristensen was making a record-equalling 15th consecutive Race Of Champions appearance, matching the mark set by rally legend Stig Blomqvist. The Dane, a nine-time winner of the Le Mans 24 hours, has now reached the Grand Final no less than five times but he has never won the big prize. By contrast Montoya was making his ROC debut here in his home town Miami.

Montoya said: “First I want to thank all the fans who came out today. Fredrik Johnsson and everyone at the Race Of Champions have put together an amazing event, it’s unbelievable. Today I’m regretting not having done this before. It has been an amazing experience.

“It’s not our job, it’s a fun event. But when you go to the grid you want to warm the tyres and the brakes. You think about how to drop the clutch, what to do in the first corner. It’s unbelievable how focused you are. It’s like qualifying. I don’t know what gave me the edge. I don’t have pride, I just kept asking people what they were doing. That way I kept adding things to the database of what I needed to do. I spoke to David Coulthard just before the final to ask whether I had to change gears in the cars because I had no idea. It went well… must be beginner’s luck!"

Kristensen added: “I’m proud to have made it to the final and I enjoy it immensely to be here. I’ve been retired for two years but coming here of course you don’t forget what you live for. We are racing drivers and to be invited to the Race Of Champions brings the best out of us. If you’re too cautious you don’t win but if you are too brave you can get it wrong so easily. But the camaraderie is special. You try to do your best and in the end all the races are extremely close so you never know beforehand who will win. So well done to Juan Pablo. I’ve known him for many years and I always knew he would have an exceptional career."

"I never did the race before, didn't want to fly 15 hours to some other place in the world. Now, you tell me I've got to fly 15 hours to go, I'll probably do it," he said. "It's been an amazing experience. It's really cool because it's not our job today. But it's unbelievable how focused you are, and the track is so little, it's like qualifying — whoop, whoop, whoop, you're done."

In the semi-finals, Montoya beat 11-time Formula 1 grand prix winner Felipe Massa 2-0 after the Brazilian earned a time penalty for contact with the wall in one of the heats. Kristensen won through over 2014 Champion of Champions and Formula 1 star David Coulthard by the same margin.

In the pick of the quarter-finals there was almost nothing to split Kristensen and 2009 Formula 1 world champion Jenson Button. But the Dane won the third and deciding heat by just 0.06 seconds to progress. Coulthard knocked out NASCAR champion Kyle Busch, putting paid to the hopes of an American winner for the Miami crowd.

01/21/17 In round 1 race 1 in the Slingshot car, American Alexander Rossi defeated American Scott Speed by 1.1 sec.

01/21/17 AR1.com is live from Miami today where we will be bringing you updates from inside the Miami Marlins Baseball Stadium where America's best drivers will be going head-to-head against some of the very best drivers in world. Can the Americans show the foreign drivers how it's done or will the Americans get the lunch handed to them? Stay tuned right here as we bring you updates as well as some videos. The groupings are as follows: