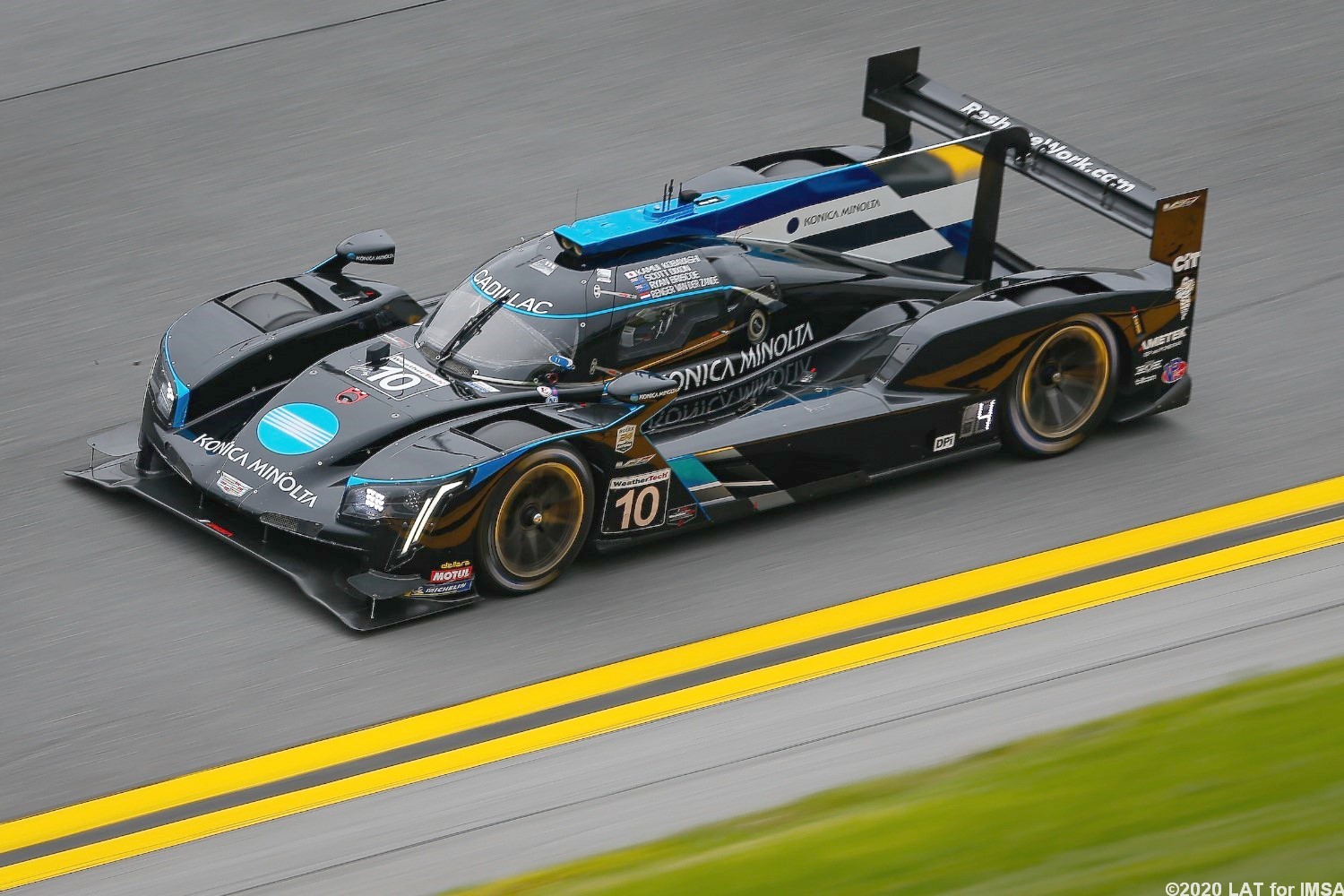 At the drop of the green flag at 1:40 p.m. on Saturday, the pace of the 58th running of the Rolex 24 At Daytona was torrid. The teams had to focus on adjusting the Cadillac DPi-V.R to changing weather conditions of 70ÂºF on Saturday to low 40s through the night. There was a stint of seven hours and forty-minutes of green flag running through the night.

With a comfortable lead, Van Der Zande handed the wheel of the No. 10 Konica Minolta Cadillac DPi-V.R over to Briscoe just before 8 a.m. Soon into his stint, Briscoe had the car shut off on course. He was able to recycle the ignition and continue as he drove through the pits. He returned to pitlane and the crew fixed the issue. However, upon exiting, he did not see the red light at pit exit and blew through it resulting in a stop plus 60-second penalty sending them down the order to fourth and costing them a lap.

This temporary issue gave the overall lead to the Mustang Sampling Cadillac team. Drivers Joao Barbosa, Sebastian Bourdais and Loic Duval kept the black and gold Cadillac on the lead lap all race, but not able to match the nighttime pace of the Konica Minolta Cadillac. The consistent driving and team performance had them in a position to capitalize on the penalty to the No. 10.

The Wayne Taylor led Konica Minolta Cadillac team used strategy and strong pit work to get the car ahead of the Mustang Sampling Cadillac on pit road to take back the lead back with four hours to go. Briscoe handed the car to Kobayashi, who had the honor of doing the final stint in the black Cadillac to the finish. For Wayne Taylor Racing, it is their third win in the IMSA DPi era, 2017, 2019, and 2020, and his fifth as a combination car owner and driver.

"It means a lot to be a part of this win. It is stressful with this team. They go 100 percent all of the time for the win. Wayne is even hard on us with the driver change practice. With the Konica Minolta Cadillac, you always have a chance to win. It is the best car I have ever driven around this track. You could push everywhere."

"I was going down the back stretch and the car shut off. I did the ignition and the car came back to life without power steering. I came to pit lane and I hit the breaker and then the steering came back. I didn't come to a complete stop and I kept going. We then pitted under yellow, fairly routine. I exited the pit box never even thinking there would be a red light. I pulled out and was checking my mirrors and kept going. It was red and I should have stopped. We were leading most of the night and then I thought, what have I done? We served our penalty and the yellows fell our way and were able to get back on the lead lap and back to the lead of the race. I didn't panic and just went back to work, there was still a long way to go in the race. We were able to get by the No. 5 Cadillac in the pits. The Konica Minolta Cadillac is fantastic. It has been the whole race. It is very consistent over the long run. We adjust the balance with the brake bias and roll bars to keep it handling. We can pass cars when we need to and put in fast laps.

"We struggled a little bit in qualifying and even at the Roar. We found out something from the Roar and we made the car better for the race. I am really happy with the team. This win is for the whole team and everyone at Konica Minolta. It feels like a good family win."

"It has been amazing. The whole race and how we got together. We were on in July and then off. I am so happy to work with Wayne. Chip [Ganassi] appreciated that I would be able to race with Wayne and I have to thank him for letting me. The Cadillac DPi-V.R was flat-out from the start. We had some problems along the way. We went a lap down then came back. We had the raw speed. You can't go wrong with the reliability and performance of the Cadillac."

"I'm on top of the world. No one single person wins this event, it is a team win. Thanks to Cadillac and Konica Minolta. To do this is quite historic. I drove my whole live, I am a five-time winner and now I want to win it every year.

"We all discussed the pace of the Mazda and Acura. You don't know the work that they have done behind the scenes. They have great balance of performance and they are run by a good team and have good drivers. We have been around longer than everyone else and I think that makes a difference."

"What a performance by Wayne and his team to get Cadillac's the fourth consecutive Rolex 24 Hour At Daytona win! Congratulations to Renger, Ryan, Scott and Kamui on their outstanding drive and consistent pace over a full 24 hours of competition. Wayne Taylor Racing portrayed excellent race strategy and delivered the winning performance. The Cadillac DPi-V.R team comprised of our Cadillac and GM race engineers, our partners at ECR and Wayne's team all combined to give us a great start to the 2020 IMSA Prototype season."

"It is amazing that we have won the Rolex 24 Hour At Daytona four times in a row! Wayne Taylor Racing together with Cadillac power put together a complete day of racing for the win. Renger, Ryan, Scott, and Kamui set a torrid pace and ran a near perfect race. To be undefeated at Daytona with the Cadillac DPi-V.R is a testament to the hard work and resilience of our team's and drivers, as well as everyone who supports the program from Cadillac engineers, GM Propulsion, our technical staff and suppliers."

"Congratulations to Wayne Taylor Racing on their third Rolex 24 Hour At Daytona win in four years. Tremendous focus, great driving, great execution in the pits. Complete teamwork! Incredible job by Wayne, the team and the drivers. This is a tremendous accomplishment in a class as competitive as DPi."

The No. 5 Mustang Sampling Cadillac team had a strong run to take the third position on the podium. The 2018 winning team chose use just three drivers during this year's Rolex 24, Joao Barbosa, Sebastian Bourdais and Loic Duval. The trio drove a strong race, but just couldn't match the pace of the front-running Konica Minolta DPi-V.R.

"The last couple of hours seemed like they took forever," Barbosa said. "I want to thank Mustang Sampling and Cadillac for doing an amazing job. This whole deal with JDC-Miller and Mustang Sampling really came together at the last minute. These guys do an excellent job. We didn't have great speed, but Cadillac was right there with the ultimate pace with the No. 10. I am very proud of our effort this weekend."

The No. 85 JDC-Miller Motorsport with drivers Juan Piedrahita, Matheus Leist, Tristan Vautier and Chris Miller had several small issues throughout the race that cost them valuable track position and time in the pits to have them finish in fifth, eight laps down.

"It is a good," Piedrahita said. "We had a lot of ups and downs. The Cadillac DPi-V.R is the most reliable car out there over 24 hours. It keeps going like it is nothing. I am very happy to be driving the JDC-Miller Cadillac. We had a few small issues like a broken fuel hose, some drive thru penalties, just small things that cost us track position and laps. I think if we didn't have those small things, we would have been driving for a podium."

The No. 31 Whelen Engineering Cadillac team was running in the top four most of race and led some laps into the night. As the sun rose on Sunday, Pipo Derani took over the car and soon after taking fuel and four fresh Michelin tires he radioed that he had a flat tire. He had to go around more than half of the 3.56-mile Daytona International Speedway modified road course at pit lane speed of 35 mph. This cost the team nearly three laps. Just 20-minutes later Derani reported he had lost gears, able to only run in third. The gearbox issue continued to get worse, so the team had Albuquerque drive the car to the garage for an internal gear change. The time spent in the garage cost the team nine laps and sent them down the finishing order resulting in a seventh-place finish.

"Unfortunately, today was not meant to be," Derani said. "We had many issues. From a simple sticker from the windshield sticking up through the air intake, to flat tires and the gear box problems at the end. A big thanks to the crew for all of their hard work. They did an amazing job considering everything. The car was always quick when we didn't have those issues. Even though we finished seventh, we can carry those points towards the Championship and fight back at Sebring."