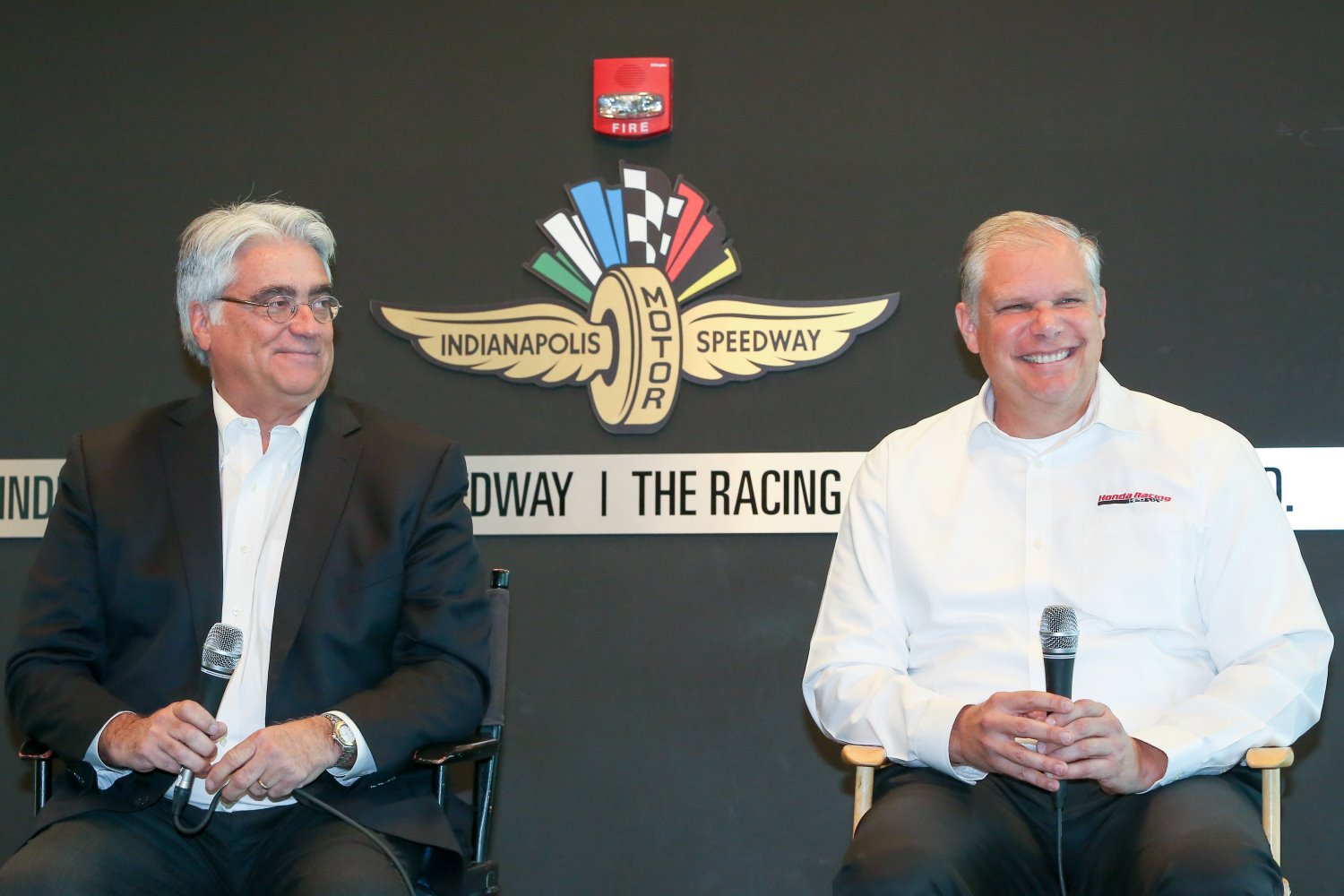 THE MODERATOR: Good morning, everyone. We now welcome on the dais a special announcement from Honda Performance Development. We have Mr. Art St. Cyr, and Mark Miles.

ART ST. CYR: I'm here to probably announce the worst-kept secret in the IndyCar off-season. This is in addition to us winning the 24 Hours At Daytona, by the way, this weekend. Get that in there. It was our signing of the engine supply agreement with IndyCar to supply engines to our IndyCar teams, to continue our long and uninterrupted streak of open-wheel racing here in North America.

THE MODERATOR: Mark, as Art said, an important announcement, not well-kept but one that will continue the tradition in the IndyCar Series.

MARK MILES: This is something we've all assumed was going to happen for the last several months. Everything that would normally be happening for the '16 season has happened. Honda and the teams are ready to roll.

It's good to have the agreement signed and to see that going forward.

I think it's open-wheel racing since '94, 13 years with the IndyCar Series, something we value deeply.

Honda, as I've been told by Art and leadership in Japan, has racing in its DNA. We like to think that means a perfect platform for them to show what they do so well. So we're very pleased that it's now official and we're looking forward to a great year in 2016.

I also want to say how much we value Honda not only as the engine supplier role that they fill so well, but also as the sponsor of I think three of the Verizon IndyCar Series races, events. They support the series in the commercialization of the series in so many ways. It's a partnership we value as much as any. We're delighted that it's inked.

THE MODERATOR: We'll open it up to questions.

Q: Obvious question is, how long is the agreement for?

MARK MILES: It's a two-year agreement with Honda, having an option for three years beyond that. I think we would say that the understanding about that is it's really important for the IndyCar Series and for Honda to know what's next in terms of future development of engines and cars, which we think we'll have a lot of clarity on within that first year or two years of the extension. We're comfortable with that.

ART ST. CYR: One thing that's important to clarify, this is a very complicated series, right? As we move forward, how do we work to try to expand the series? How do we work to get more teams?

[adinserter name="GOOGLE AD"]Q: Could you clarify, Mark, when the new engine came out, how many years the original contract was?

MARK MILES: I'm not sure I can give you the full history. The two years are '16 and '17, with the extension being the following three years.

Q: This agreement from Honda's perspective, obviously you're very bullish on the series. Talk about where you want to see the series go, not just for Honda but overall. We're seeing more fans, attention to the series. Where do you think this is going to go in relation to the agreement?

ART ST. CYR: That's a very open-ended question on that one.

Obviously, as Mark said, Honda, we want to race. This is a premiere series in North America, so it's very important for us to have a presence in this type of racing.

Now, what we want to do and what we're trying to do with this agreement, and agreements beyond this, is to really create a foundation that has a good platform to have exciting racing, to have exciting personalities, to make it effective so more teams and potentially more partners can join this series.

There's some flexibility built into that to allow for growth that all of us crave so much.

Q: I'm glad you got the deal done, because I can't imagine Honda not being here since you supported the series since 2003. Talk a little bit about the aero kits. I know there were some allowances possibly made. I think Honda submitted some ideas to IndyCar. I don't know where that stands. Did some of the ideas you submitted get approved? Are you still waiting to hear? You need to know soon.

But part of the whole process, and we knew even going in with the aero kits, there was a possibility of an imbalance on how things happened. So last year was a little bit of a struggle for us. It's pretty common knowledge there.

In the process, in the rules process, it allows us a chance to redevelop and re-homologate some areas. We did have a list of requests that we submitted to IndyCar. They didn't approve all of them.

We don't have a final ruling yet on that one. I think Marco was here before, saying they were still worried about some of these tracks as well. I think we have a common understanding of where we're going with this stuff. I think that our expectation is that we can be competitive this year.

Hopefully that answered your question.

Q: Will your Honda package look like the Chevy package?

ART ST. CYR: One of the things with this package that we have right now is that we have taken the development, design development of this aero kit, from outside Honda to inside Honda. We have utilized our internal Honda resources.

Our car will look very similar to our old Formula One cars in Honda. A lot of the features are similar. We're not the sole holders of good ideas, so some of the elements may look similar, but that was not the intent.

MARK MILES: I'm going to take a minute and elaborate on the process because I think it's important that folks understand what we're going through and where we stand.

The rules provided for an ongoing competition, Section 9.2. We're looking forward to what that looks like for 2016. The rules also have a section that provide if there was an issue with respect to the competitiveness between the two, beyond the preordained 9.2 opportunity, there was the opportunity for the series to look at the issue. Specifically the rule said, number one, one aero kit not competitive with the other. Number two, does that create a situation that is detrimental to the Verizon IndyCar Series.

After the Sonoma race, we took the 9 car and the 15 car and we took it to the wind tunnel in Charlotte to look at the two cars in Superspeedway configuration and street and road course configurations. We determined there that we thought there was an issue, competitive issue, with respect to streets and roads, but not the Superspeedway and short ovals.

We went back then with Honda's request for changes to analyze those and determined what we thought would be acceptable. We looked a third time at the final parts to make sure they would achieve the catch-up, if you will, that everybody had in mind.

We are I think days away with Honda and Chevy promulgating what that all will look like.

Q: When the two bodies sit down at the table, Art wants what's best for Honda, Mark wants what is best for the IndyCar Series. As an outsider looking in on the negotiations, are there more common points than sticking points, the majority of the things that you go to negotiate are common points?

ART ST. CYR: Honestly, I think that just about everything we fundamentally agree on. Where we want to go, how we want to get there, what we want this series to be, I think it's a very common understanding of that.

Now, the path to get there, there's some resources required to get to where we want to go, so there are always negotiations on how to get to our goal. There's lots of paths to go. That's stuff we work on all the time, constant communication, to try to make it stronger, make it more appealing to fans, how to get more fans to watch the race, to come to the race, to enjoy the races, to follow the drivers, all those types of things, to develop an overall interest in this series that we are striving for right now.

MARK MILES: Actually, I agree completely. The negotiations, almost in quotes, because it was just ironing out details, weren't about those things. What are the engine rules for the next several years? What does the shape of the calendar look like? What are the processes to regulate all that? Not negotiating the metrics on the popularity of the sport.

They are where they are. They're moving in the right direction. I think everyone who invests in this will make their future decisions about that based on what's achieved.

But we absolutely have the same view about the importance of more eyeballs watching the sport. The question is, not a contractual question, is how can we all work together to get farther faster.

MARK MILES: It's hard. It's a long, drawn-out process for a third manufacturer to come in and be competitive in this series. I would say the first thing is that Honda and Chevy completely share with us a view that a third manufacturer would be good. Another competitor, another storyline, another investor to help promote the sport would simply be good.

It's very difficult to get done. We have had situations where Honda has said, You may want to talk to these guys. It's been quite collaborative. I think it's more likely a question of when than whether. It's something we are engaged in at some level all the time.

ART ST. CYR: With the supply agreement we have right now, we've engineered some flexibility in to address those issues if and when they show up.

THE MODERATOR: Gentlemen, we thank you for your time. Congratulations on this fantastic announcement, making it official here today. We look forward to seeing Honda on the grid for the 100th running of the Indianapolis 500.