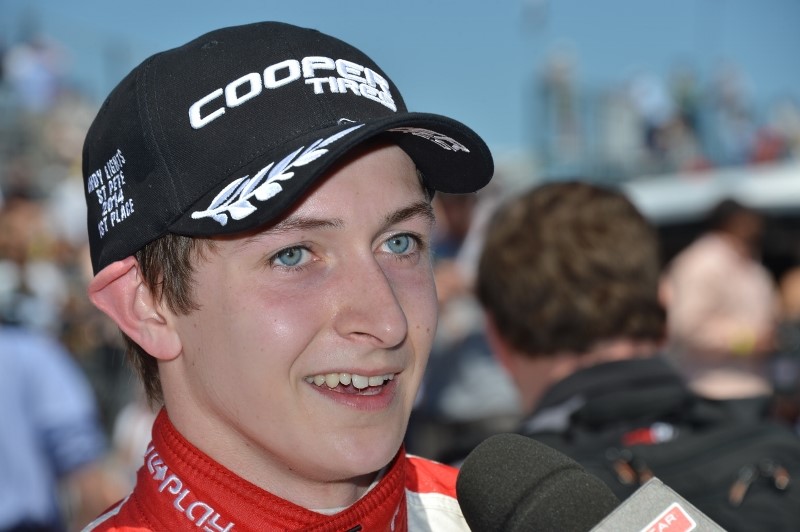 Ask any successful race car driver what is the key to success, and most will tell you that perseverance ranks above all others. It is a trait put to good use in 2015 by young Zach Veach, who made the most of a season spent out of the racing cockpit. Driving the Verizon IndyCar Series two-seater and providing commentary for the IndyCar Radio Network, Veach kept himself on the radar until fortune came around again – this time in the form of an Indy Lights Presented by Cooper Tires ride with 2014 champions Belardi Auto Racing.

After a hand injury and subsequent surgery ruled him out of a Belardi drive in the Freedom 100 at Indianapolis, Veach kept in touch with Brian Belardi and team manager John Brunner through the remainder of the season. The team took the next opportunity – a November test at Sebring International Raceway – to put Veach in a Mazda-powered Dallara IL-15. The test in the new Indy Lights car began to change Veach's mind about his 2016 focus.

"I was quick in my first couple of days in the car, so we all started thinking about going for a championship together," said Veach. "All the pieces were in place and that switched my gears from thinking about IndyCar to going for another season of Indy Lights. It's good to have that title as an Indy Lights champion and we were so close in 2014. I really learned a lot that season about how to fight for a championship, and now I know I have what it takes to win."

But Veach has as much of a story off the track as on, making it difficult to encapsulate the life of the 21-year-old Ohioan in one narrative. Author of 99 Things Teens Wish They Knew Before Turning 16 (released on his 16th birthday), Veach has campaigned against distracted driving since 2010. He was an ambassador of Oprah Winfrey's "No Phone Zone" and released a smartphone app, which automatically responds to a text while driving. However, his ultimate goal has been clear from a very young age.

"I don't know where it came from but I told my parents that I wanted to be a race car driver when I was about 4 years old. They laughed about it, probably figuring that the next week I'd want to be an astronaut or something! We went to Indianapolis for a George Strait concert when I was around 10, and I agreed to go if they would take me to the Indianapolis Motor Speedway museum. It just blew my mind and, as we drove out, I said that one day I was going to drive there."

Veach came up through the Mazda Road to Indy ranks, but his journey was not without a few bumps in the road. Racing karts at age 12, he won numerous Ohio championships before turning his attention to formula cars. As Veach looked to make the next step, he seemingly found himself thwarted at every turn: first the Formula BMW USA closed shop, then the Formula Atlantic series as he seemed poised to make the transition. Then, one day, the phone rang, with Andretti Autosport asking if Veach would like to run in the Cooper Tires USF2000 Championship Powered by Mazda.

"That really led me to believe that everything does happen for a reason and just because something's bad today, don't think that it's going to stay that way. Signing with Andretti was probably the biggest moment of my career, because it ended up putting me on the Mazda Road to Indy and changed my life and my future. You grow so much more as you go up the ranks of the Mazda Road to Indy, especially Indy Lights. You have to be so dedicated to be quick."

The move began a run of five seasons with Andretti Autosport. Led by former IndyCar champion Michael Andretti, the team provided Veach with exactly what he needed as he progressed in his career. Running USF2000 in 2010 and 2011, Veach moved up to Star Mazda (now the Pro Mazda Championship Presented by Cooper Tires) in 2012 and finally, Indy Lights in 2014. Though he has moved on now to a new team, Veach appreciates everything he learned in his time with Andretti – including his relationship with a former rival-turned teammate.

"Working with them gave me the experience I needed to grow. In my opinion, there are two types of drivers: those who are naturally gifted and those who are self-built, who have the talent but need to work every day to hone that. I was paired with Sage Karam very early on and he's one of the former types, whereas I'm one of the latter. He was always the rabbit I was chasing and from Day One, I had to figure out how to get faster, how to know what I needed to work on. In 2014, all that ‘catch up' finally caught up to me and I really started to take off."

As a graduate of all three levels, Veach appreciates that the Mazda Road to Indy gives drivers a steady progression into IndyCar, with levels designed to provide drivers three distinct opportunities to develop their talents. Naturally, the Mazda scholarship program helps (with over $2.3 million in scholarships and awards handed out at year-end).

"I think the Mazda Road to Indy ladder is perfectly set up. As a young driver, you want to make your mistakes in a USF2000 car. The car doesn't have a ton of downforce so it really rewards the guys who can hang the car out on the edge. Once you get to Pro Mazda, you start to get some of that downforce, with a car that is a little quicker. You learn how to set the car up, especially in dirty air. Then, when you get to Indy Lights, everything changes. The car is more sophisticated, you have more guys on the team and you have a stronger relationship with your engineer than just about anyone. I feel as though that's where everything crystallizes to make you ready to go into IndyCar. Since the scholarship can help you get there, that extra pressure adds to the seriousness. The USF2000 or Pro Mazda championships are important, but the Indy Lights championship can get you to your dream, so everything is so much more intense."

Veach took away significant lessons from the 2014 Indy Lights title chase. With three victories (including the season-opener in St. Petersburg, Fla.) and four pole positions, he finished third in the title chase behind eventual winner Gabby Chaves and Jack Harvey who ended the year tied on points. Veach believes that the lessons learned in 2014 will serve him well as he aims for the title – and the Mazda scholarship that will take him into the Verizon IndyCar Series – in 2016.

"Gabby and I had a great rivalry from the start: he had the pole at St. Pete, and I won. I had the pole at Long Beach and he won. I won the first race at Barber and he won the second. It was the first time in my life that someone pushed me to the limit. The weekend that cost me was the Indy road course, where we had a couple of bad races because I was too aggressive, too eager. Michael (Andretti) told me that it wasn't his victories that won him the championship, it was his third and fourth-place finishes. I had to understand that I was having a bad weekend and needed to minimize the damage. I was constantly learning, since that was the first year I was in the position of winning races and leading a championship, so every weekend I was trying to understand why I was where I was and what I needed to do to stay there. I have to take everything I've learned in the past and put it together flawlessly in 2016. This is my second chance to have the life I want to have; I have to not waste this one.

"It feels like a comeback, even though I didn't go anywhere."