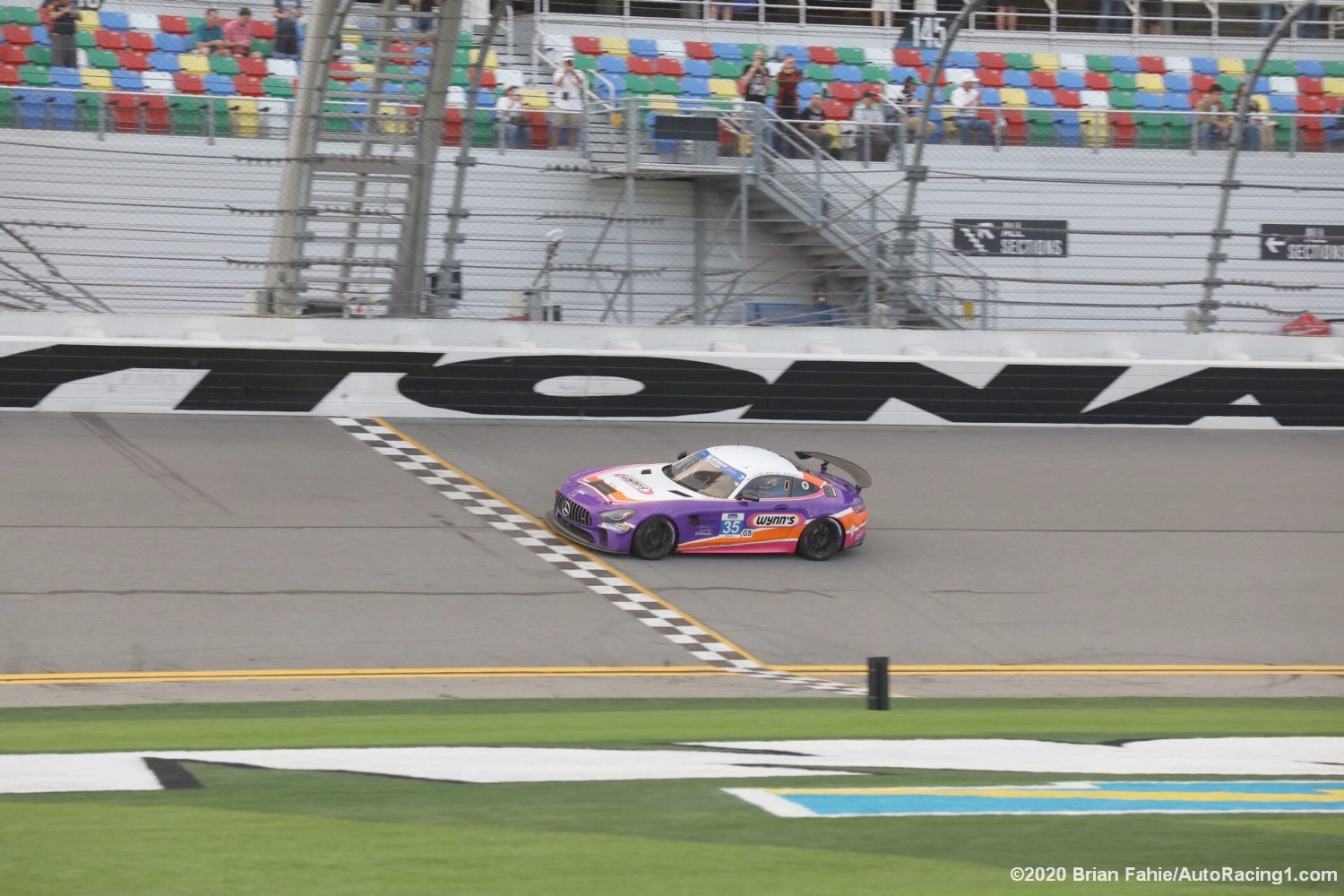 Daytona Beach. Mercedes-AMG Motorsport Customer Racing teams Riley Motorsports and Winward Racing combined to give the Mercedes-AMG GT4 its first podium sweep in worldwide competition Friday with a 1-2-3 finish in the season-opening IMSA Michelin Pilot Challenge four-hour race at Daytona International Speedway (DIS). Dylan Murry, Jim Cox and Jeroen Bleekemolen won their third-straight four-hour IMSA race in the No. 35 Riley Motorsports Mercedes-AMG GT4. The winners were followed across the finish line by the No. 57 Winward Racing Mercedes-AMG GT4 of co-drivers Bryce Ward and Philip Ellis and the team’s sister No. 4 entry of Russell Ward and Indy Dontje.

The top-three made it a dominating day for the Mercedes-AMG GT4 on the 3.56-mile DIS road course. The winning Riley team and drivers combined to lead a race-high 60 laps and led a competitive train of three and sometimes four Mercedes-AMG GT4 teams at the front of the field for the final two hours of the race.

Winward Racing’s runner-up and third place showings are the first time the two-car team has landed both entries on the podium in the same race. The No. 57 Winward entry led two race laps and Ellis, in his Daytona debut, set the fastest lap of the race of 1:54.295 (112.130 mph) in the Grand Sport (GS) class.

Beginning their second year as teammates, Russell Ward and Dontje earned a podium finish together for the first time with their third place showing in the No. 4.

A fourth Mercedes-AMG GT4 entry joined the top three at the front of the field for most the race’s final two hours. The No. 56 Murillo Racing Mercedes-AMG GT4 of Jeff Mosing and Eric Foss ran in tight formation up front with the Riley and Winward cars but dropped from contention, and to an eventual eighth place finish, after a late pit stop for a loose wheel.

On-track action at the World Center of Racing continues this weekend with the 58th running of the Rolex 24 At Daytona, January 25 – 26.

The No. 74 Riley Motorsports team of co-drivers Gar Robinson, Lawson Aschenbach, Ben Keating and Felipe Fraga will give the Mercedes-AMG GT3 Evo its North American debut in the GT Daytona (GTD) class in the twice-around-the-clock race.

The IMSA Michelin Pilot Challenge race will be aired in a two-hour telecast on NBCSN on Thursday, February 6 starting at 1 p.m. EST.

Dylan Murry, Driver – No. 35 Riley Motorsports Mercedes-AMG GT4: “To be able to drive at Daytona is one thing. To be able to win here is an entirely different world. I can’t describe the emotions I am going through right now. I have always said, ‘if I could win one race, it would be Daytona.’ I watched my Dad race here, really grew up at track here in Daytona, so it is amazing to win here with Riley and Mercedes-AMG."

Jim Cox, Driver – No. 35 Riley Motorsports Mercedes-AMG GT4: “We worked really hard in the off season. We want to make a charge on the championship this year. As the gentlemen driver in this car, to stand in victory lane in Daytona is quite an experience. I am not sure it has fully sunk in yet. This our third four-hour race win and we are thinking of petitioning IMSA for all the races to be four hours."

Jeroen Bleekemolen, Driver – No. 35 Riley Motorsports Mercedes-AMG GT4: “The whole Riley Motorsports team has always done well in the longer races. We have always been leading the races here, sometimes even most of the race, and you know when you have a Mercedes-AMG GT from Riley you are going to be fighting for a good position. It’s great, I am happy to be back in this car, and this is my first win at Daytona. It took a while, 10 years, but it just fantastic and a lot of fun with this entire team."

Matt Bejnarowicz, Lead Engineer – No. 35 Riley Motorsports Mercedes-AMG GT4: “What we really see is all the pieces of the puzzle coming together. We really worked on it a lot last season. We spent a lot of time here at Daytona preparing for this event, and this time it fired on all cylinders, and I mean everything. We spent by far the least amount of time in the pits. I’d have to back it up with data, but we were told we were on pit lane the least. The crew just nailed every stop, never made a mistake, and the drivers drove flawlessly. The Mercedes-AMG GT4 makes an engineer’s life easy and it makes a team’s life easy because it is extremely durable. If you treat it right, it will just keep running laps for you."

Bryce Ward, Driver – No. 57 Winward Racing Mercedes-AMG GT4: “I want to thank the engineering staff and the guys back at the shop with Russell for the unbelievable work they put in during the off season. That kind of work leads to these results. I am proud of them. We have really committed to Mercedes-AMG and see a great long-term future between ourselves – Winward Racing and HTP – with Mercedes-AMG. We look forward to many, many years of success as we had today. Our Mercedes-AMG GT4 was really strong, really stable and a great car to drive."

Philip Ellis, Driver – No. 57 Winward Racing Mercedes-AMG GT4: “I am extremely happy with the result for both cars. Bryce started in 18th and worked his way up to P8 at one point. We came back out after his two stints but lost some positions during a caution and lost some more spots on the restart. We fought our way back and found ourselves behind the winning car. Everybody is extremely happy here, maybe some things to work on in the coming race, but I am pretty happy with my first appearance here in IMSA."

Indy Dontje, Driver – No. 4 Winward Racing Mercedes-AMG GT4: “A good race today. We finished third in the No. 4, taking P3 and P2 with our Winward Racing team, and a whole lockout out the podium for the Mercedes-AMG GT4. Our car ran very well, and we had a smooth race. I am happy with the performance from Russell, he drove a great stint at the beginning and then I finished it off. Overall we are really happy."